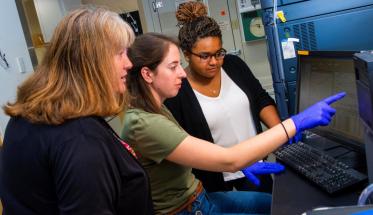 Included on the World Health Organization’s Model List of Essential Medicines, Paclitaxel (PTX) has a market value of more than $2 billion annually. First identified as an anti-cancer agent in the 1970s (the compound works by blocking cell division) and given FDA approval in 1992 for its first application, treating ovarian cancer, it is now used to treat a wide range of tumors, as well as AIDS-related Kaposi sarcoma, and may have other medical uses, including treatments for Alzheimer’s disease, skin disorders, and inflammation. 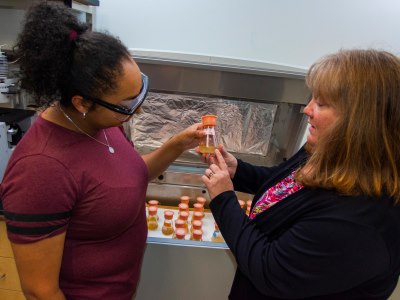 For many years, PTX, which defends the Pacific yew tree against fungal infections and other stressors in nature, was obtained by harvesting and processing the bark of the tree, a process with a low yield: it takes three one-year-old trees to produce enough PTX to treat a single patient. In addition, the process is environmentally unfriendly as trees are cut down and harsh solvents are used to obtain PTX.

“Essentially, we are manipulating the tree’s own defense system in the laboratory to create more PTX and related compounds,” Roberts said.

In recent years, techniques have been developed for chemically synthesizing the compound, though the complex processes cannot be easily scaled for mass production. Most of the world’s production now is achieved by culturing cells taken from the needles of yew trees. (In fact, Roberts noted, PTX is one of the few commercial products in the world manufactured through plant cell culture technology.)

While using cell culture is a greener method than extracting the chemical and related compounds from yew bark, the yields are still low and variable, Roberts noted, and the production process is not optimal. For that reason, scientists have sought to enhance production by applying genetic engineering methods to manipulate metabolism through the addition or removal of genes to or from Taxus cells. However, finding reliable and stable gene transfer methods has proven difficult.

In a recent paper in the journal In Vitro Cellular & Developmental Biology (Development of an Agrobacterium-mediated transformation method for Taxus suspension cultures), Roberts and her research team described a reliable way to stably genetically engineer Taxus cells, a process that could make production of PTX (as well as 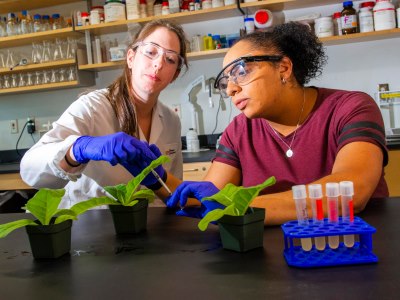 McKee and Alarondo use a syringe to inject
agrobacterium, a microorganism that can genetically
transform plant cells, into a tobacco plant. They use the
same technique to modify cells of the Pacific Yee tree.

other plant-based medications) faster, easier, and greener, and make the medications and products produced less expensive. The process involves the use of a bacterium known as Agrobacterium, which transforms the cell’s genome, ultimately resulting in metabolic changes that increase the yield of PTX.

In her current research, funded by a $600,000 grant from the National Science Foundation, Roberts is taking a new approach that aims to eliminate cells in culture that do not produce high amounts of PTX. Part of that work

involves efforts to control the metabolic pathways that Taxus cells use to both replicate and manufacture hundreds of compounds, including the precursor molecules for PTX. Through genetic engineering, she hopes to be able to harness the metabolic pathways in a controlled manner to develop a higher producing culture to be used in large-scale biomanufacturing.

Roberts takes a multipronged approach to cellular engineering—intracellular (through genetic engineering), extracellular, and intercellular. She is engineering the extracellular environment the cells grow in to see if altering the amounts and types of sugars, hormones, nutrients, and mixing variables affect growth rate and production of PTX. She also is studying intercellular interactions to determine if changing the communication signals between cells in culture can improve their performance. It is likely that the best cell lines will be developed using combined strategies addressing all of the relevant scales. 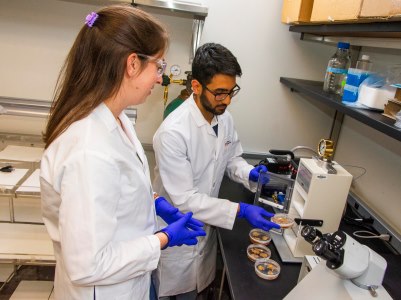 “We are trying to understand how cellular pathways are controlled by the cell so we can effectively engineer them and direct biosynthesis towards the molecules we are most interested in,” said Roberts.

Roberts is also looking at other species of yew, as well as yew trees from different geographical areas, to see if any are superior in their production of PTX and related compounds or their ability to be engineered.

“What we’ve already accomplished could easily double production of Taxol consistently,” said Roberts, who has been working on this project since 1993 and is the world’s foremost expert on PTX plant cell culture. “By combining different strategies, especially using the genetic engineering tool we just developed, we could expect multifold increases in production. In addition, a lot of the techniques we are developing in the laboratory can accelerate the production of other plant-based medications. We’re learning so much about plants, cell culture technology, and the processes of producing drugs from plants that when the next big plant-based drug comes along, we’ll be able to develop a process to produce it better.”