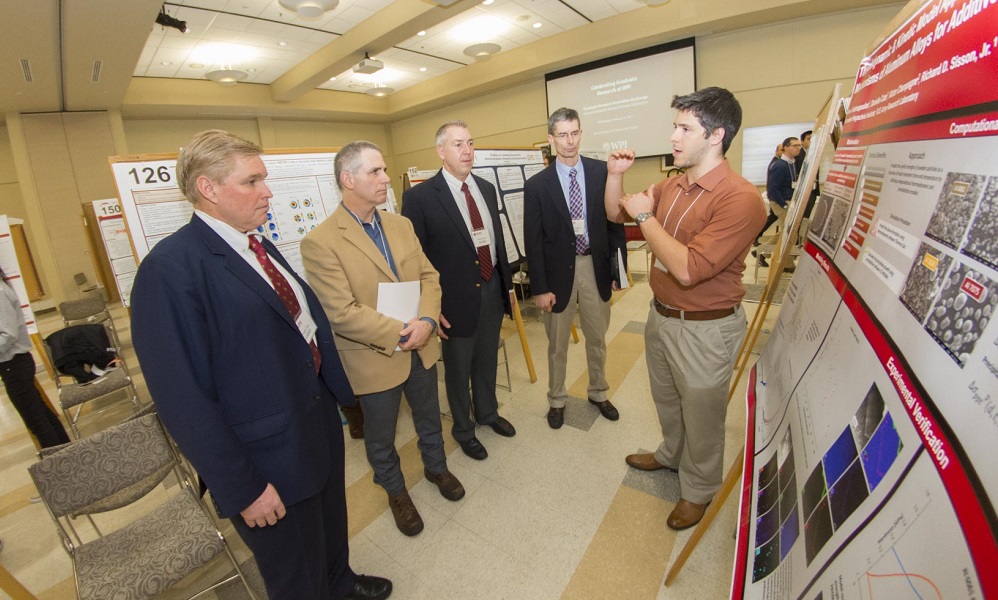 Panel of entrepreneurial experts to judge entries in April 11 event

Michelle McKee has always been interested in studying plants as medicine and natural remedies, and even designed and created a medicinal plant garden at a local garden center. She completed her undergraduate studies in biology at Indiana University while researching the production of hallucinogenic alkaloids in morning glories, and decided to continue her studies in the field as a graduate student at WPI.

McKee joined Professor Susan Roberts’s lab in the fall of 2014, “because I was fascinated with her work studying the production of the common cancer treatment Taxol (or paclitaxel) in Taxus plant cell culture,” she says. “I read about the discovery and history of the drug and plant and research that had been done up to that point in the field, and I knew that was where I wanted to focus the following years of research.”

Now a third-year PhD student in the biology and biotechnology department at WPI, McKee presented her research at the Feb. 8 Graduate Research Innovation Exchange (GRIE), a competition for graduate students, and was selected as one of 69 PhD and master's candidates as a finalist for the April 11 final competition.

Finalists will vie for a cash prize as they present their work to a panel of entrepreneurial experts in the Rubin Campus Center Odeum. The GRIE poster finals are from 1 to 3 p.m. i3: Investing in Ideas with Impact, will run from 3 to 5 p.m. i3 is a pitch competition that encourages graduate researchers to think like entrepreneurs. An awards ceremony and reception for both programs will be held at 5 p.m.

The annual GRIE is a poster celebration and competition that highlights the breadth, diversity, and quality of WPI's graduate research. Sponsored by the Office of the Provost and the Dean of Graduate Studies, it is a two-part event consisting of an open poster exhibition and celebration and poster finals and awards.

The well-attended event is considered a marketplace where students across disciplines get to know each other and share far-reaching discoveries and new ideas while also receiving feedback on research in-progress.

McKee says her overall research goal is to understand and optimize the biosynthesis of Taxol in Taxus cells to increase availability of the drug.

“My GRIE poster was about the development of a selection system to allow cells that produce high levels of Taxol to grow and reproduce and those that are not productive enough, will die,” she explains. “We are engineering the mammalian caspase, a cell-killing protein, to be turned off by the presence of Taxol, but active to induce cellular death in cells that don’t produce enough Taxol.”

Though the U.S. Food and Drug Administration approved the common drug Taxol in the early 90s, she says the real hurdle is its production. It was first discovered in large Pacific yew trees, she points out, which take lots of space, time, and money to grow.

“We don’t understand how to replicate it,” she says. “In plant cell cultures it is easy to grow and produce much faster.”

She adds that she is looking forward to seeing what other students across campus are researching at the finals.

The finalists are moving forward after competing in the first part of the competition on Feb. 8, when nearly 170 master's and PhD candidates shared their innovative and purposeful research with the WPI community. Attendees voted for their favorite poster presentations in the People's Choice Award competition. The winners who tied in the morning session were Cansu Sen and Ramoza Ahsan (both Computer Science) and Siamak Ghorbani Faal (Robotics) in the afternoon session.

During the February phase of the competition, judges evaluated the entries after learning more about the projects and selected candidates to move onto the finals in six categories: arts and sciences, business and social science, data science and cybersecurity, engineering, life sciences and bioengineering, and robotics and cyberphysical systems. The finalists will compete again during the poster finals on April 11 from 1 to 3 p.m. in conjunction with the finals of the i3 graduate research pitch competition from 3 to 5 p.m.

Johanna Santos, a graduate student from New Jersey in the biomedical engineering department, is also competing in the finals. She says she eagerly pursued the opportunity to conduct research in a university setting and joined the Quantitative Neurotechnology Lab under Professor Dirk Albrecht.

“Between my sophomore and junior years of undergraduate study, I received a SURF grant to perform my own research in this lab over the summer, focusing on the formulation of a neutrally buoyant, visibly opaque solution of E. coli to flow through the microfluidic devices commonly used in this lab to study the model organism C. elegans,” she explains. “I continued my work in this lab for the next couple of years, completing my MQP in this lab, and graduating in May of 2016.”

After graduation, she switched labs to learn more about cells and biomaterials.

“Due to my background in microfluidics and my interest in biomaterials, I was welcomed into the (George) Pins lab to continue work on a long-term project that had been assigned to several MQP teams and graduate students over the years: creating a microfluidic device able to sustain a population of cells out of fibrin gel,” she says.

Santos is presenting her findings at the finals, but has longer-term plans for her work.

“In 10 years of development, it can be used as a cardiac patch,” she explains. “With a heart attack, a lot of cardiac tissue dies and no longer gets nutrients. There is the possibility of stitching it into existing vasculature in the heart to restore blood flow and some function and vasculature. It could also be used in general wound healing, muscle loss, and possible other uses.”

The competition was not as stressful as she thought, she said, because she does not like talking in front of people.

“But, pretty much everyone came up interested in my research,” she says. “It was interesting to talk to people from a lot of areas of study. WPI is a nice research environment and doesn’t feel harsh or competitive.”