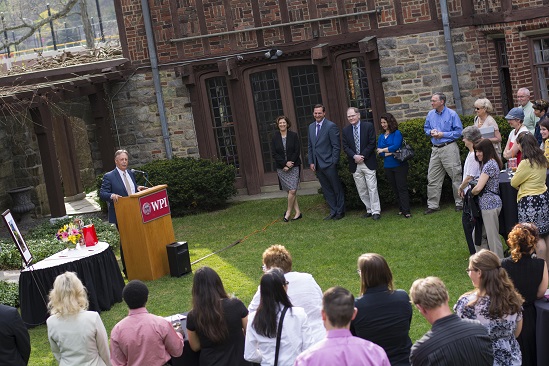 Faculty and staff gathered in the Higgins House gardens Tuesday afternoon to pay tribute to and thank Eric Overström for his five years of service as WPI’s provost. Overström, who came to WPI 11 years ago as a department head, will take a one-year sabbatical, during which he will work to strengthen partnerships between WPI and UMass Medical School.

Overström was lauded for bringing talented faculty to the university, for supporting innovative academic programs, and for representing WPI well locally and in countries around the world. He will be succeeded by Bruce Bursten, Distinguished Professor of Chemistry and former dean of the College of Arts and Sciences at the University of Tennessee, Knoxville, who will assume the post on June 1. 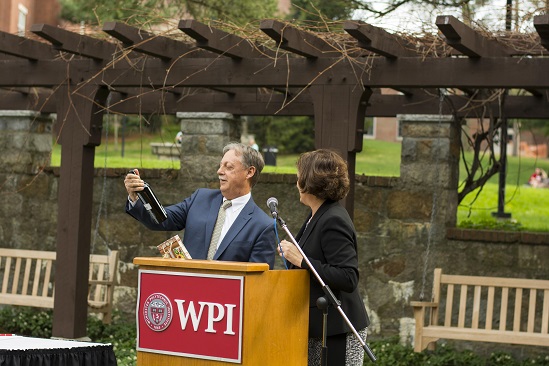 “I think many of you have heard me say that a great university is based on its faculty,” Overström said. “And it’s been an honor and pleasure to serve as the faculty’s representative to the administration. It’s an amazing group of people. We’ve brought on amazing colleagues to join an already world-class faculty.”

President Leshin called the job of provost “one of academia’s most difficult balancing acts,” being placed between the administration and faculty, while ensuring students get the best education possible, making sure faculty is successful in the classroom and research, and doing that with a budget that never seems adequate.

“Eric, I think you have walked that tightrope with grace and good humor,” Leshin said. “You are always putting a positive face on WPI’s academic programs, representing us so well locally, and in communities around the world. You have positioned us for an exciting and impactful future.… I am reaping the benefits of your hard work on the academic side.” 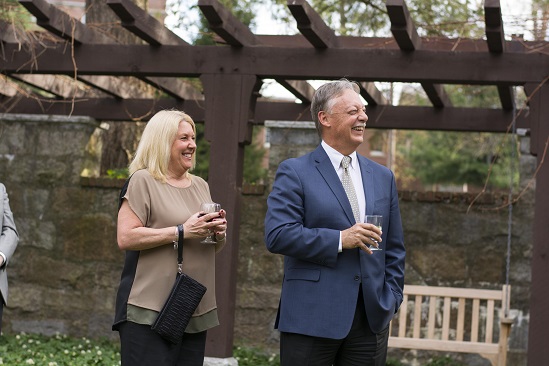 Board chairman and former interim president Phil Ryan said he enjoyed working with Overström in academic planning and other areas, and acknowledged the challenges of advocating and representing the views of faculty and the administration. He credited Overström with helping elevate the level of non-tenured faculty, the growth of the undergraduate population, and the double-digit growth in sponsored research.

“You always brought to those challenges and opportunities a level of insight, intelligence, thoughtfulness, judgment, and … a commitment to the unique mission and culture and value of WPI,” Ryan said.

During his remarks, Overstrӧm recalled that on that same day—May 5, five years ago—he was summoned to speak with then-president Dennis Berkey. “It was at that point that he made an offer I apparently couldn’t refuse,” he said, eliciting laughter from the gathering. 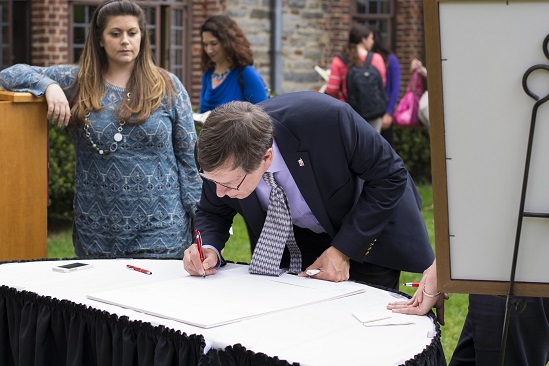 ​Overström said that while on the faculty at Tufts University prior to his arrival at WPI, he observed WPI students doing their IQPs there and was struck at how good they were. “As I taught in the veterinary and medical curriculum at Tufts, I had WPI graduate students in my classes, and they always outshone everyone,” he said. “The reason for that is, not only are the wicked smaht, they know how to be dynamic and how to move quickly. … They adapt very quickly.”

When Overström arrived here in 2004, the vision of Gateway Park had not yet taken shape. He and others developed a plan and garnered acceptance by the administration. “It’s one of the more proud elements I feel good about,” he said. “We have 30 faculty and more than 60 graduate students there now. It’s been really quite successful.

“Today, WPI is at pivot point of greatness. We’ve come a long way in a short time. It’s been a period of dynamic change, and growth. I think we’ve managed it the best we can. We are, as Laurie says, at a place to take this to the next level.”