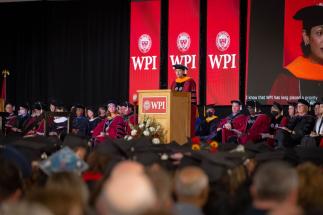 Worcester, Mass. - May 14, 2022 - Today, Worcester Polytechnic Institute (WPI) concluded its 153rd Commencement exercises. Beneath a large white tent on the campus the university bestowed just over 750 master’s and doctoral degrees on the evening of Thursday, May 12, and nearly 1,200 bachelor’s degrees this morning. This week’s ceremonies marked the first time the entire class and their family and friends were able to gather together for in-person ceremonies since 2019.

This year WPI awarded a total of 684 master’s degrees and 69 PhDs during Thursday evening’s Graduate Commencement ceremony at which Sethuraman Panchanathan, PhD, Director of the National Science Foundation, gave the keynote. Today’s undergraduate ceremony keynote address was given by Rochelle Walensky, MD, MPH, Director of the Centers for Disease Control and Prevention (CDC), and Administrator of the Agency for Toxic Substances and Disease Registry. Both Panchanathan and Walensky were awarded honorary degrees.

In her final commencement exercises before stepping down to become the Director of NASA’s Jet Propulsion Laboratory, President Laurie Leshin presided over both celebrations, along with Board of Trustees Chairman William Fitzgerald ’83. Since 2016, WPI has held two distinct exercises in the spring to celebrate the accomplishments of its undergraduate and graduate students, owing in part to the growth of its programs, particularly its graduate programs.

During the undergraduate students' ceremony, honorary degrees were also bestowed upon State Senator Harriette Chandler, the first woman from Worcester to serve in the Massachusetts State Senate, a position she has held since 2001. Lesley Small Zorabedian ’72 was honored with a Presidential Medal for her trailblazing efforts to help shape the university. She was one of the first women to be enrolled at WPI as an undergraduate in 1968 and in 1972, she became the first woman to receive an undergraduate degree from WPI. 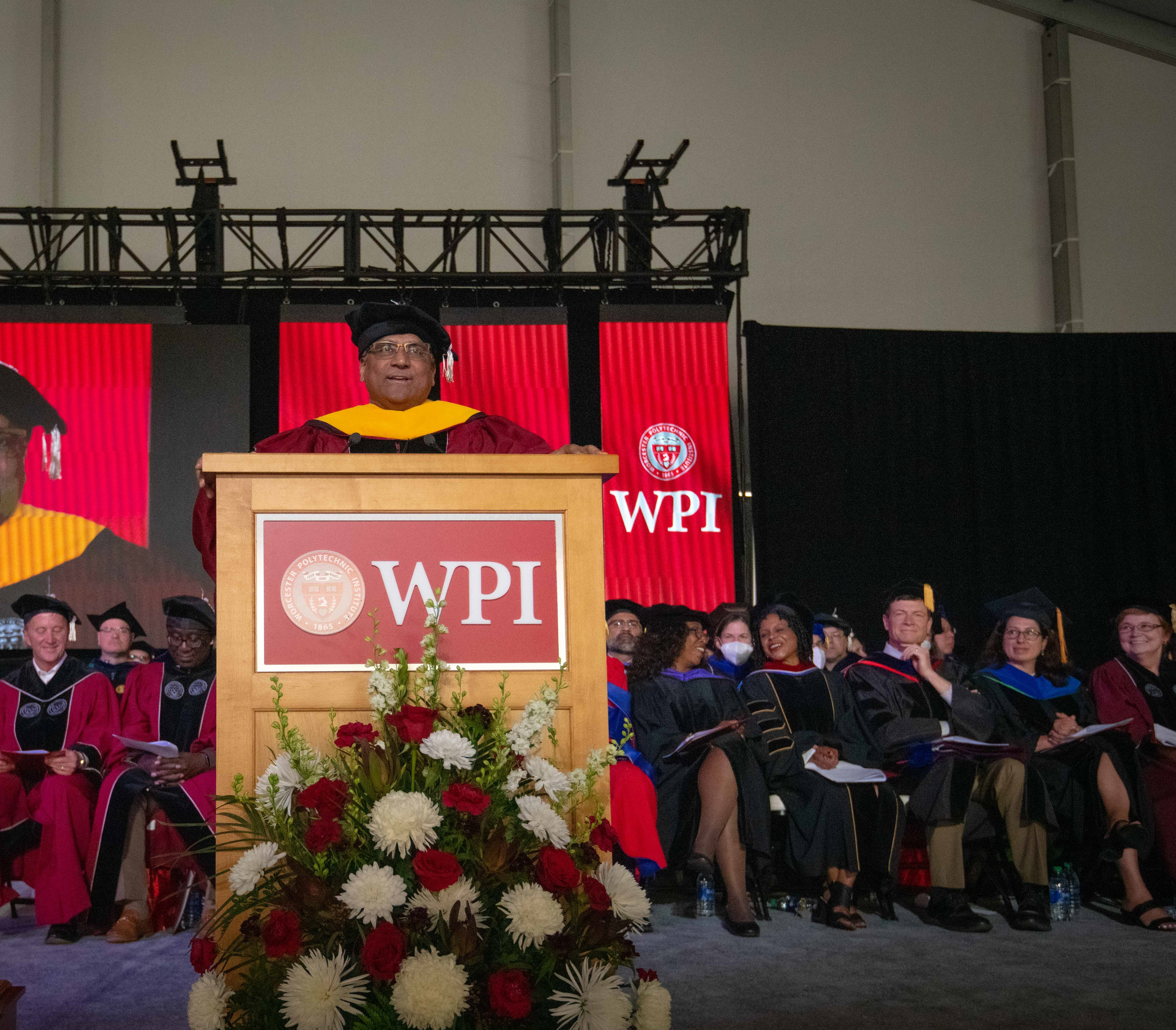 During the graduate students' ceremony, Panchanathan received an honorary Doctor of Science degree. In his address he referred to WPI as a “wondrous place for innovation” and told the Class of 2022 about the “Five C’s of Success” – Curiosity, Courage, Commitment, Collaboration, and Communication. To illustrate his point about commitment, he talked about WPI researcher Yan Wang, and how he stayed committed, with funding from the NSF, to refine a new process for recycling lithium-ion batteries that led to the co-founding of the company Ascend Elements. “This is a phenomenal accomplishment because of the commitment of an amazing faculty member working with his team to make this possible.”

The graduate student speaker was Merzia Adjamee, who received an M.S. in Computer Science, with a concentration in Artificial Intelligence and Natural Language Processing. Adjamee joined WPI in fall 2020, after receiving a Fulbright scholarship. In her speech, titled “Resilience,” she spoke of coming to WPI from Pakistan and finding a diverse community here — “what I loved about being here was the idea of fostering learning by doing and reflecting on experiences. I met people here with whom I shared experiences that were different from my own and picked up on ideas and strategies that worked better even than my own.”

During the ceremony, Walensky received an honorary Doctor of Science degree. She praised the members of the Class of 2022 for navigating the uncertainties of the 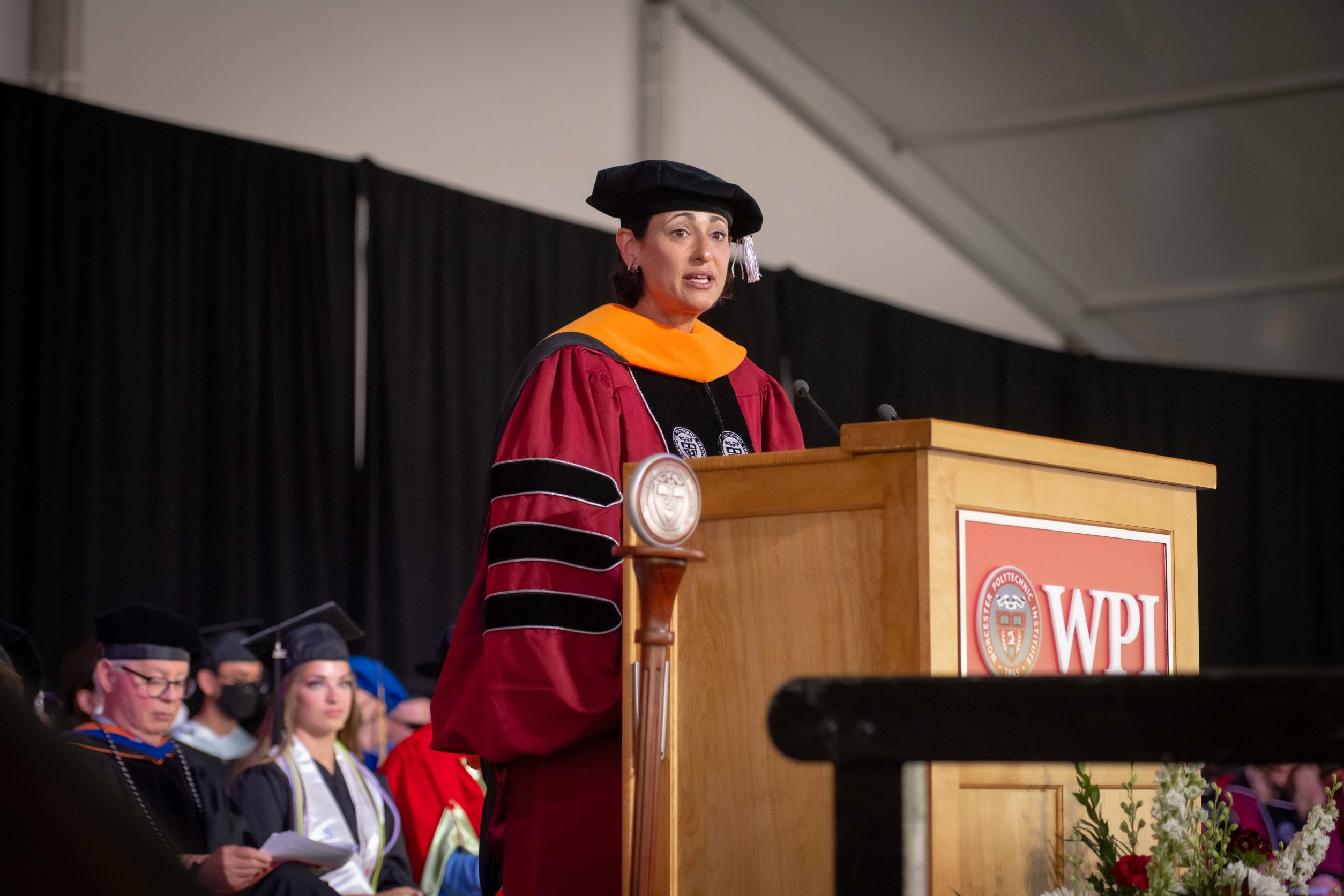 pandemic and implored them to continue embracing the many shades of gray they first encountered due to COVID-19, and are likely to continue to face in their professional lives. “Uncertainty instills vulnerability and fear, so we tend to suppress it. But consider this – what if we acknowledge it and accept it. Scientific studies have demonstrated that intolerance to uncertainty leads to burnout, anxiety, and paralyzing indecision.” She requested that the graduates have this same sort of flexibility, asking, “who knows where your path will lead?” She also encouraged them “to embrace, not to suppress, the gray,” as it could lead to them discovering their own light. “One thing is for certain, " she said, "there is uncertainty ahead, there is gray ahead, there is fog ahead, and there are bright colors ahead. Go find your rainbow.”

The undergraduate class speaker, Nicole Conill, received a Bachelor of Science degree in Computer Science, with a focus on cyber security. Conill is pursuing a master’s in Computer Science at WPI. Her speech was titled “Reflect on the Past. Celebrate the Present. Focus on the Future.” She concluded by telling her classmates to “follow your heart to wherever, whomever, or whatever it is that calls you. Use what you’ve learned from WPI, whether it’s academic or personal, to guide you on that journey.”

A Community Celebration and Presidential Graduation

In her remarks, President Laurie Leshin celebrated the Class of 2022 and all they have accomplished during their time at WPI, including how they weathered the challenges of the pandemic. “While it would be unfair to describe the second half of your time at WPI as anything short of extraordinarily challenging, as always, I am so heartened by how this community came together to meet every moment. The pride I have for you, which was already over the moon, grew exponentially over these past two years—your perseverance, grit, and achievement assure me, and they should assure everyone here, that you all will go on to make your positive impact on the world.” 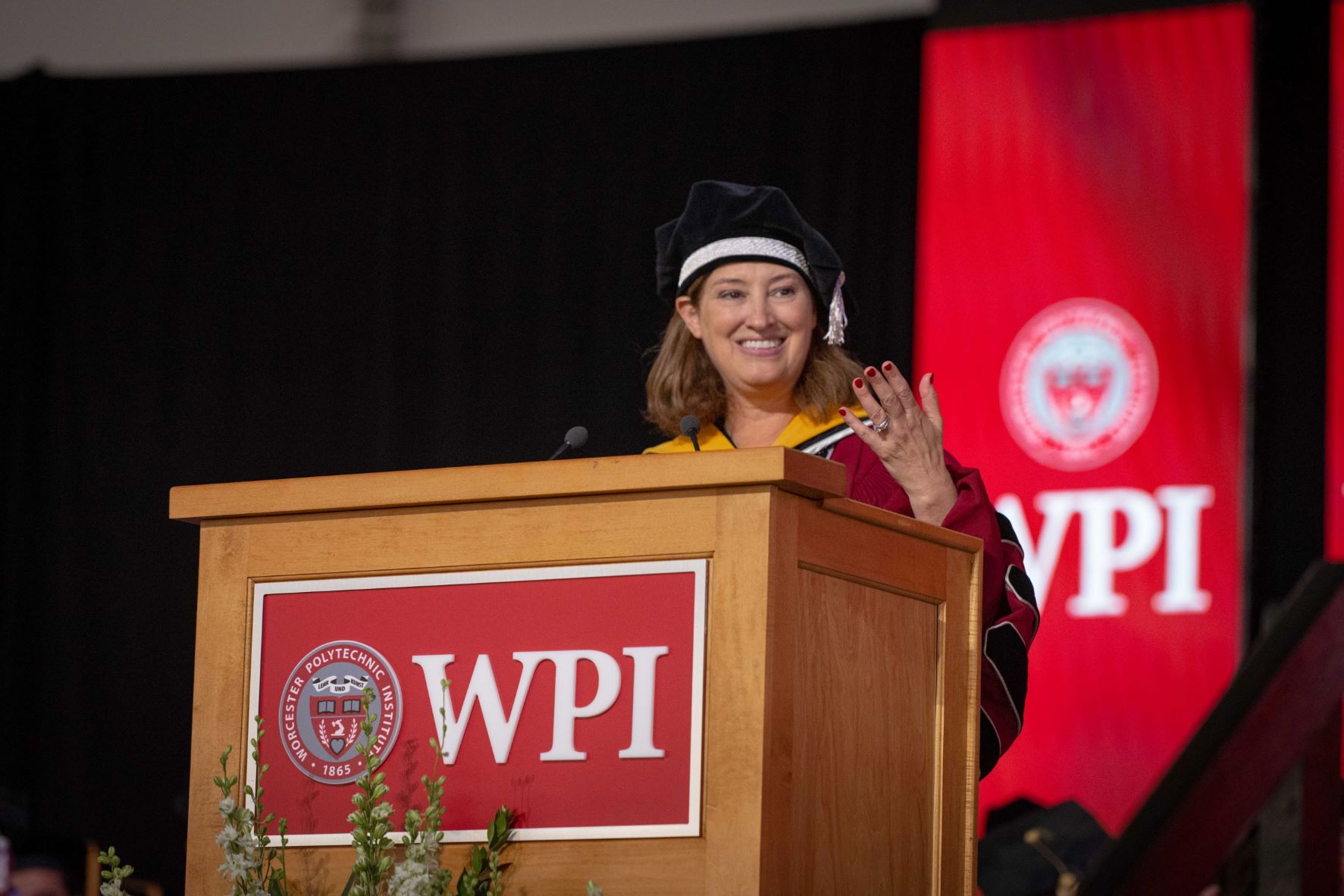 While she gave the Class of 2022 a sendoff, it was also a day of celebration and farewell for Leshin herself. She is stepping down as president of WPI to become director of the Jet Propulsion Laboratory. JPL is operated by Caltech for NASA. “I leave, as you do, with so many lessons and so much hope for the future of this great university and beyond,” she said. And then, she asked the class to do her a favor: “Would it be okay if I consider myself a member of the Class of 2022?” It was a request they accepted wholeheartedly. “You (and I) will be part of the WPI family forever," she said, "and it is this family that makes WPI so special.” 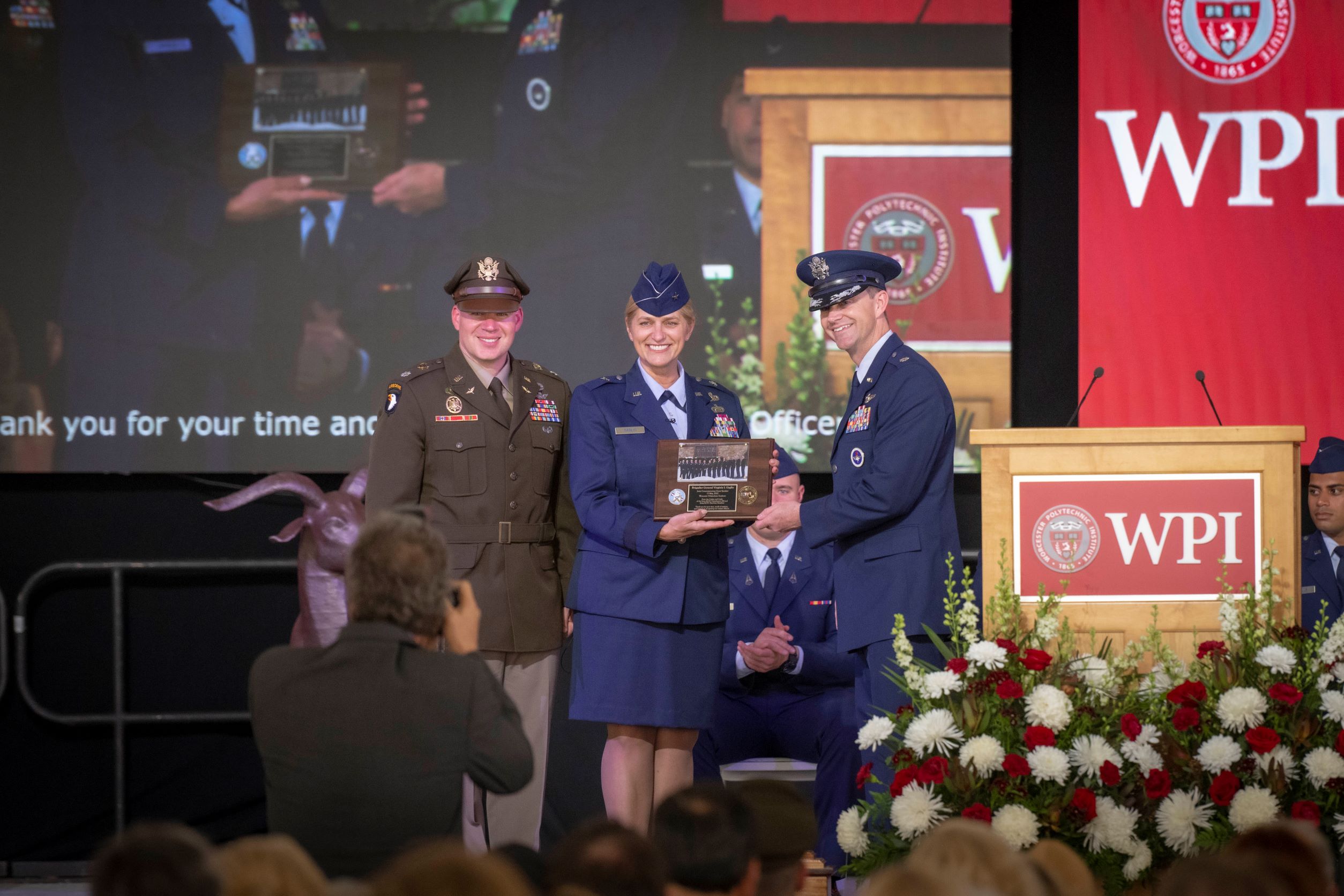 On Friday, May 13, 21 cadets of the Army, Air Force, and Space Force ROTC were commissioned as officers in the U.S. military during the Worcester Consortium of Colleges Reserve Officers’ Training (ROTC) Corps Joint Service Commissioning Ceremony. Brigadier General Virginia I. Gaglio, Chief of Staff and Air Component Commander of the Massachusetts Air National Guard, presided as commissioning officer, administering the oath of office, and delivering the keynote remarks.