One is so proficient with robotics that he was called upon to assemble a team to fix the Miami police bomb squad’s robot when the city had no funds for the work.

Members of the Class of 2018 participate in a rally in Harrington Auditorium as part of New Student Orientation. 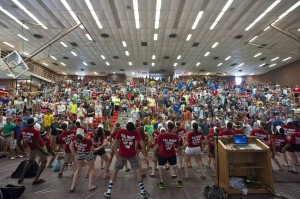 Another is a national table tennis champ of Vietnam.

One has medaled at a prestigious sporting event; one has participated in Revolutionary War reenactments—one can tick off 1,000 digits of Pi.

“It’s always interesting to hear how students are getting involved and making themselves known outside the classroom,” says Dean of Admissions Ed Connor ’92.

WPI students past and present have long been known for their ingenuity, creativity, and entrepreneurial spirit – and the incoming class is no exception. Selected from a record 10,233 applicants, the roughly 1,050 incoming students – who began classes on August 28 – not only represent the top echelon of their high school classes, but have achieved a panoply of eclectic personal accomplishments.

The Class of 2018 is an incredibly talented group of individuals who are eager to make a positive impact.
Kristin Tichenor
WPI Senior Vice President

Among them are a one-time assistant and interpreter for a U.S. General while on a speaking tour in Vietnam; the representative of India to the 2011 International Spelling Bee in Malaysia, and a helicopter pilot. Three have patents pending—for a blender drill bit, a biodegradable fishhook, and a light-beam delivery system.

Another has already secured a patent—he led a team of three from Gulliver Prep School in Miami in developing an “Eco-Cooker,” a self-sustainable cooking and heating system that uses methane gas derived from the anaerobic decomposition of bio-waste, Connor explained. The project went on to take first place in the energy and environment category in the Conrad Spirit of Innovation Challenge’s Innovation Summit held at the NASA Johnson Space Center in Houston – a distinction that came with a $10,000 prize and notice from potential investors.

The incoming class is an avidly active group: one is a three-time national bronze medalist for synchronized skating; another is a member of the world’s No. 1 ranked roller hockey team; yet another wrestled in the 2013 Junior Olympic Games. Many more have climbed major mountains or biked across country, and some specialize in Greek, Irish, and tap dance, according to Connor.

“The Class of 2018 is an incredibly talented group of individuals who are eager to make a positive impact,” says Kristin Tichenor, WPI senior vice president.

Academically, 499 – or almost half – of the class graduated from from their high schools with 4.0 GPAs, 92 were either valedictorians or salutatorians, and 78 percent achieved perfect scores on one section of the SAT or the ACT.

More fun facts? The most common male name among them is Matthew; the most common female name is Rachel. Forty-one percent are from outside New England (including 12 percent from other countries). And, in a statistically impressive feat, the class is composed of eight sets of twins. 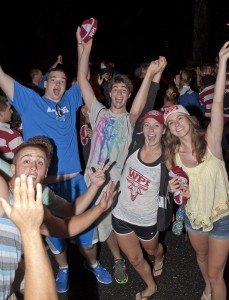 As for their academic interests at WPI?  Mechanical engineering is by far the most popular major, Connor says, and biomedical engineering numbers are growing. He also noted a rebound in computer science majors, which had been dropping off—he credits that to the fact that the discipline affords numerous possibilities in any number of fields, such as robotics engineering and interactive media and game development. Plus, there are the major draws of the salary potential and job opportunities.

“Our CS department head will say there are many more jobs for computer science graduates that he has graduates right now,” says Connor.

All told, WPI received the most applications it has in years, following a consistent upward trend and a 54 percent increase over the past five years.

“This was a very competitive year for admission,” says Connor. “Those students who were admitted and enrolled are well-deserving to be here. We have high hopes for their success at WPI academically, but also in terms of their growing as young men and women and making that transition to the next stage of their lives.”