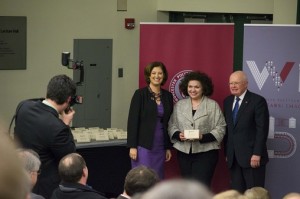 More than 50 WPI faculty members were recognized for their impressive accomplishments in research, teaching, service, and beyond at the 2015 Trustees’ Celebration of Faculty Achievement on Feb. 26. Audience members, including trustees, faculty, staff, and students, were also treated to a timely presentation on cybersecurity education.

The inaugural event, which coincided with an annual meeting of the WPI Board of Trustees, spotlighted faculty successes in 2014—including promotions to full professor and associate professor with tenure; WPI awards for research, teaching, and service; recognitions from government and national organizations and professional societies; publications and editorials, selected distinctions, and patents.

Topics
Awards
|
Faculty
DEPARTMENT(S)
Faculty
Think of this event as the Super Bowl of academia—and you are all Tom Brady.

In explaining the impetus behind the new tradition, President Laurie Leshin opened the ceremony with a quote from the bookWinning: The Ultimate Business How-To Book, by Jack Welch:

“Celebrating creates an atmosphere of recognition and positive energy. Imagine a team winning the World Series without champagne spraying everywhere. And yet organizations win all the time and let it go without so much as a high five. Work is too much a part of life not to recognize moments of achievement. Make a big deal out of them. If you don’t, no one will.”

“I am starting that tradition of making a big deal of your achievements,” continued Leshin. “Think of this event as the Super Bowl of academia—and you are all Tom Brady.” 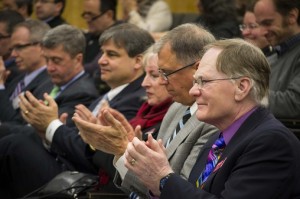 She praised faculty for both their academic achievements and impacts on students, noting that in the past few years, the WPI faculty body has counted 12 Fulbright Scholars, more than 20 NFS CAREER Award winners, numerous Fellows of professional societies, and multiple endowed professorships.

Just as important, she noted, “Whether our students are tackling first year seminar problems, getting acclimated to the field of robotics engineering, poring over research in Gateway Park, or spending their C-Term in Hong Kong, they rely on your values, your leadership, and your care—they achieve and succeed because you achieve and succeed.”

Offering congratulations and expressing her wish to continue the tradition on a yearly basis, Leshin said, “We can’t and we won’t reach our full potential without leveraging your passion for teaching, your vision of the future, and your undying desire to push the boundaries to make an impact in the world.”

Award winners were called up individually by Provost Eric Overström and received plaques from Leshin and board chairman Phil Ryan. Incoming provost Bruce Bursten was also on hand to applaud the honorees. 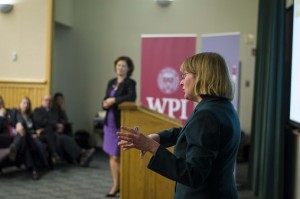 As part of the event, Kathi Fisler, director of the WPI cybersecurity program and professor of computer science, was chosen from among the honorees to speak about the impact of her work. Fisler, who was honored for her promotion to full professor, gave a talk titled “What Cyberattacks Teach Us About Security Education.”

Fisler discussed the dangers of using simplified metaphors that frame cyberattacks as purely technical problems to be dealt with by professionals. She gave examples of recent breaches, including the theft of 56 million credit cards from Home Depot, a widespread email leak at Sony, and a case of compromised privacy Facebook—all of which involved factors beyond technical limitations, such as failures in business processes and shifting notions of privacy.

She then described the need for security education to consider technical issues in context, and spoke about how WPI’s distinctive educational model lends itself to this holistic view. 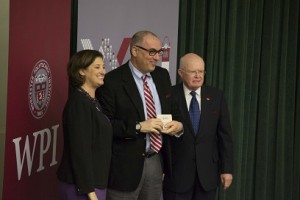 “Balancing policy and innovation, privacy subtleties, and human behavior—we don’t teach any of this stuff in the Computer Science Department. Where do we teach them? The School of Business, Social Science, Humanities and Arts,” Fisler said. “WPI has a real opportunity to leverage our cross disciplinary programs and to become a national leader in providing secure data education for all students.”

PROMOTED TO ASSOCIATE PROFESSOR WITH TENURE

Diane Strong, Professor, Foisie School of Business, received the Board of Trustees’ Award for Excellence in Research

Sharon Wulf, Professor of Practice, Foisie School of Business, received the Board of Trustees’ Award for Excellence in Teaching

Matthew Ward, Professor, Computer Science, received the IEEE VPG Software System Award for his contributions to Multivate Visualization and Visual Analytics Through the Development and Continual Refinement of XmdvTool (posthumously)

Steve Kmiotek, Professor of Practice, Chemical Engineering, awarded a special recognition from the NE Air & Waste Management Association for “Outstanding Leadership and Contribution” for his work with them and the Environmental, Health, and Safety profession over the last 20-plus years

Pamela Weathers, Professor, Biology and Biotechnology, elected a Fellow of the American Association for the Advancement of Science

David Medich, Assistant Professor, and Germano Iannacchione, Professor and Head, Physics, received major awards from the Nuclear Regulatory Commission (more than $1.1M) to support the re-launch of the Nuclear Science and Engineering Program at WPI

Karen Kashmanian Oates, Professor and Dean of Arts & Sciences, named Alumna of the Year for RIT College of Science; elected Member of Board of Trustees at Pennsylvania College of Health Sciences