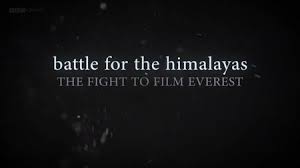 From our 21st Century vantage point, it’s difficult to imagine a time when visual images of faraway places were new. Google Earth and livestreaming make much of the world seem as accessible as our own neighborhoods.

But in the 1920s, British filmmakers brought home the first shots of Mount Everest. And they were extraordinary.

Professor Peter Hansen, author of The Summits of Modern Man: Mountaineering after the Enlightenment (Harvard University Press; 2013), recently served as a consultant for a BBC documentary, “Battle for the Himalayas: The Fight to Film Everest.”

Any 20th Century historian has to look at film as a historical document.
Professor Peter Hansen

It aired on the Timeshift program on BBC Four at the end of January in the U.K. Plans are under way to screen the documentary on March 25 in Fuller Labs for the WPI community.

Hansen, who teaches in Humanities and Arts and is director of International Studies, has appeared in two previous BBC programs, one in 1997 on Edmund Hillary and Tenzing Norgay—the first climbers to make the Everest ascent successfully in 1953—and a second in 2000 about the Matterhorn.

This time, BBC producers were drawn to an article he had written on the first Everest filmmakers in the 1920s, especially John Noel, who produced films in 1922 and 1924.

In the documentary, Hansen talks about Noel as well as the first photographs taken above the summit from a bi-plane in 1934 for the film Wings Over Everest. His comments also reflect his expertise on the broader history of filming the mountain from the 1920s to the 1960s.

“Any 20th century historian has to look at film as a historical document,” he says. “Not just to get a feeling [about an era], but because films themselves became actors in the world.” 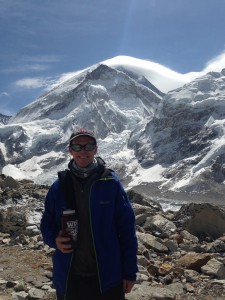 That perspective is particularly appropriate for John Noel, whom Hansen describes as a “showman and entrepreneur” focused on performance. Noel’s portrayal of Tibetan monks in his second film offended Tibet and deeply affected Anglo-Tibetan relations. As a result, the country halted Everest expeditions for a decade.

“The film had real consequences for diplomatic relations,” says Hansen.

The history of mountaineering, particularly for Britain in the 20th Century, is inseparable from the European drive for international power.

“There is a connection between British imperialism and the conquest of the mountains up to the 1950s, when the empire was collapsing,” he says. “British mountaineering became less imperial after the ascent in 1953.”

Hansen’s research focus emerged in graduate school, where he first examined 19thCentury British mountaineering. While not a serious climber, he had “done enough to think it was an interesting topic.”

Once he arrived at WPI, he extended his reach to include Britain and the Himalayas in the 20th Century. The Summits of Modern Man circles back to the 18th Century and across the globe.

“The book is more European and global history than British: France, Switzerland, Italy, Austria, Germany, India, and Nepal,” he says. “Hillary and Tenzing would have thought of themselves as British, not in the narrow sense but rather as part of a more inclusive and multicultural greater Britain.”

Hansen is now working on another book for Harvard University Press about Everest in the 20th Century, which focuses in part on the commercialization of climbing expeditions that Jon Krakauer helped to expose in his book, Into Thin Air (1997).

Some 4,000 people have made the ascent to Everest, most in the past 15 years, says Hansen. 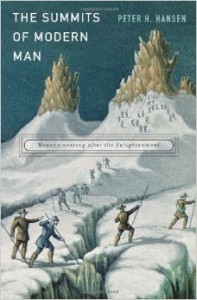 He himself finally got a chance to travel there last April, when he joined an expedition to the base camp; at 17,500 feet, it offers the earliest view of Everest. The summit is another 11,000 feet beyond. The trek takes a couple of weeks, with gradual climbs each day necessary to acclimate to the thinning atmosphere.

Shortly after he descended, but while he was still in the area, an avalanche killed 16 people, giving him a firsthand view of the close-knit trekking community.

“It was quite something to see the mourning, the grief,” he says. “Everybody in the region knows someone making their livelihood on the mountain, either by climbing or assisting a trekking agency.”

Hansen’s contribution for the BBC documentary was filmed last October in London. In December, he also spoke at the Rubin Museum of Art in New York City after a showing of John Noel’s restored 1924 film, The Epic of Everest. The event was part of the alumni program,“WPI in Your Neighborhood.”