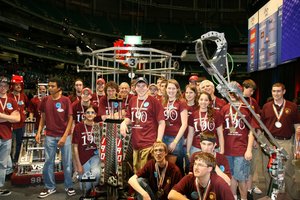 WORCESTER, Mass. – The FIRST robotics team from the Massachusetts Academy of Mathematics and Sciences at WPI, which is sponsored by Worcester Polytechnic Institute (WPI), walked away with the championship trophy at the FIRST (For Inspiration and Recognition of Science and Technology) Championship at the Georgia Dome in Atlanta on Saturday, April 14.

The WPI/Mass Academy team, Team 190, captained the championship alliance, which also included Team 987, "HIGHROLLERS," of Cimarron-Memorial High School in Las Vegas, Nevada, and Team 177, "Bobcat Robotics," of South Windsor (Conn.) High School. At the end of a weekend of competition, the WPI-led alliance defeated another three-team alliance in the final round to clinch the championship trophy.

"After 16 years of FIRST competition, we finally did it," said team advisor Kenneth Stafford, adjunct assistant professor at WPI and director of the university's robotics resource center. "We are the FIRST Robotics world champs. In front of the collected membership of 350 FIRST championship-qualified teams, filling over 10,000 seats in the Georgia Dome, and undaunted by the incredible strength of our opponents (including a four-time world championship team), we completed a come-from-behind, nail-biting, two-of-three series to seal our position as champions."

Student teams built their robots over a period of just six weeks. They were required to meet design specifications that included rigid overall weight and size limits, but otherwise left room for substantial innovation. This year’s game, called “Rack ‘N’ Roll,” tested the students’ and their robots’ ability to hang inflated colored tubes on pegs configured in rows and columns on a 10-foot-high center “rack” structure, program a robotic vision system to navigate the robot, and “lift” other robots more than 12 inches off the floor.

The WPI/Mass Academy victory in Atlanta was the climax to months of competition involving more than 1,300 teams from the United States and six other nations, including Brazil, Canada, Israel, Mexico, the Netherlands, and the United Kingdom. FIRST is a not-for-profit founded by Dean Kamen, a WPI alumnus, who is the renowned inventor of the Segway Human Transporter. The public charity offers innovative programs that motivate young people to pursue opportunities in science, technology, engineering, and math while building life skills. Teams earned their invitations to the championship by excelling in competitive play, sportsmanship, and the development of partnerships among schools, businesses, and communities. In all, more than 10,000 students from 23 countries competed in the Atlanta event, which also included FIRST LEGO League and FIRST VEX Challenge world championships.

“To passively sit in a classroom is a 19th century format,” said Kamen. “In this next century, you’re going to have to be creative, or you’re not going to make it. We want to help stimulate our youth to be varsity thinkers and varsity creators.”

The WPI/Mass Academy team is one of only five that have remained continuously involved in FIRST Robotics since the competition began in 1992. On March 3, the team won the prestigious Regional Chairman's Award at the FIRST BAE Systems/Granite State Regional in Manchester, N.H., making it the first team the competition's history to win the award in two consecutive years. Upon announcement of the award, which was presented by Kamen, the team received a standing ovation from the 45 other teams from across the United States and Canada. Later in March, the team won the overall Tournament Champion's Award as well as the Motorola Quality Award (a major award for elegance in design and execution) at the Silicon Valley Regional Robotics Tournament in San Jose, Calif.