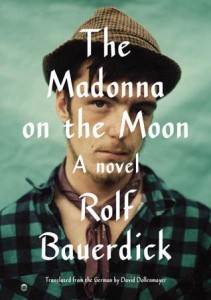 People may not often think about it, but the fact is that a great deal of the world’s literature is available to us thanks to translators such as humanities and arts professor David Dollenmayer.

In fact, Dollenmayer recently translated Rolf Bauerdick’s novel, The Madonna on the Moon, from German to English. It was his sixth novel translation to date; he has also worked on four nonfiction books, two short stories, and one play.

He says he became interested in translating literature after realizing that classical works by authors such as Homer, Tolstoy, Cervantes―and even the Bible―are familiar to English-speaking audiences only because of translation.

“I find a lot of people don’t realize how dependent we are culturally on translation,” he says. “From the time I was an undergraduate beginning to learn German, I always experimented with translating short things from German into English, but I never thought of doing serious translation because in the ’70s and ’80s when I was beginning my academic career, translations did not “count” as publications toward tenure in academia.”

That all changed several decades ago when opportunity almost literally knocked on his door.

“When an Austrian author named Anna Mitgutsch gave a reading at WPI in the ’90s, she told me she was not happy with any of the English translations of her novels. I said if she sent me her next novel, I’d like to give it a shot. She did, and was very pleased with a 40-page sample I prepared for her. That’s when I realized this was something I could do in a serious way.”

Dollenmayer, who has earned several international awards for his work―and was recently named one of 16 recipients of an NEA Literature Translation Fellowship for 2014―notes that there are distinct challenges that accompany his craft. The first, he says, is to develop an extensive knowledge of the original author’s language and culture.

He adds that the more remote the source language and culture are, either in terms of time or distance, the more difficult the translating.

Certain colloquialisms or phrases that are peculiar to a specific language may also present a challenge. In those instances, Dollenmayer says he looks for a direct, one-for-one English equivalent. Failing that, he aims for the nearest substitute. Other times, it’s necessary to translate the original literally if it’s important to give it a foreign feel.

“There are theories of translation that demand that the translator make his work sound ‘foreign’ in order to constantly remind readers that they’re reading a translation. I do not subscribe to that theory and my goal is almost always to make the work sound like it was written originally in English.”

Dollenmayer has been teaching German language and literature at WPI since 1988. He cut back to half-time last year, and next year he will teach his final course, a literature seminar in C 14.

He says that teaching literature at a science university has allowed him to make some interesting observations.

“A challenge with some engineering students is to get them to accept ambiguity and not expect one and only one right answer to a given question. Which is like translation; there can only be one original, but there can be an infinite number of good and accurate translations, which, I guess, is sort of a paradox.”