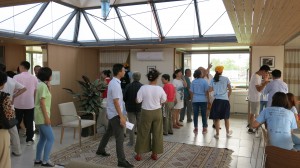 Six days into the Solar Decathlon China 2013 competition, Team BEMANY, led by WPI, is holding sixth place in a field of 19 teams, only 3.928 points behind leader Team SCUT (South China University of Technology). The Solatrium, a solar house designed and built by students from WPI, Ghent University in Belgium and Polytechnic Institute of New York University, has already had several thousand visitors while judges assess the 1,500-square-foot house on the 10 criteria used in scoring the competition.

The competition, which challenges each team to build an attractive and economic, net-zero energy solar home, is a joint initiative of the U.S. Department of Energy and China’s National Energy Administration.

Team members who have been blogging about the experiences say visitors were very curious about the house, and very impressed with the interior design. On the first day alone, some 3,000 people toured the Solatrium, one of several designs constructed in the Solar Village in Datong, China.

The members of Team BEMANY (BE for UGent in Belgium, MA for WPI in Massachusetts and NY for NYU-Poly in New York) are living in the nearby “Solar Palace,” during the competition, but have entertained other teams’ members in the house they built. During the competition (which runs until Aug. 13), judges are monitoring how much energy is drawn from the Solar Village grid as the team cooks for two dinner parties, holds  a movie night, and does a pile of laundry the judges deliver to their door. The amount of energy the Solatrium puts into the grid is tracked during the competition. The goal is to achieve net-zero energy, or for the Solatrium’s 42 solar panels to produce all the energy needed to operate the house.

The teams’ scores are based in part on the quality and design of the home theater system, the ambiance, and the overall experience. Team BEMANY is also required to serve their guests snacks, with more points awarded for homemade goodies from fresh ingredients. They served artisan BEMANY flatbreads and fresh fruit. Team members concocted a bruschetta-style flatbread, as well as one with melted cheese, honey, and apples.