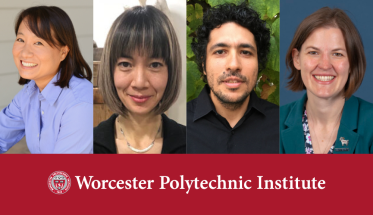 Four members of the WPI community from two project teams were recently granted fellowships from Advancing Research Impact in Society (ARIS): Yunus Dogan Telliel, Kathy Chen, Katherine Foo, and Sarah Stanlick. To better understand those fellowships and their importance, it helps to first understand ARIS, the framework within which they were awarded.

Based at the University of Missouri, ARIS was created in 2018 under a $5.2 million grant by The National Alliance for Broader Impacts, which itself was formed by a grant received by the National Science Foundation (NSF). Broader impacts are the impact of a proposal on society, according to the NSF, either through research itself, activities connected with research projects, or activities supported by that research.

Some areas of potential research projects, according to NSF, could include improved national security; advanced levels of public scientific literacy; or improved STEM education, for example. In all cases, the mission of broader impacts projects is to include underserved populations, broadening participation.

The first project team is composed of Telliel, assistant professor of anthropology and rhetoric, and Chen, executive director of the STEM Education Center. Their ARIS project, “Scenario Analysis and Workforce Development: Opportunities for Research Impacts,” is designed to help researchers think more broadly and deeply about workforce development, says Chen.

Telliel and Chen work with two WPI students, Allison Steeves, a recent graduate of the undergraduate programs in Professional Writing and Interactive Media and Games Studies and Galen Brown, a PhD student in Computer Science.

The goal of the project is the development of a digital scenario-planning tool that can aid researchers looking at the issue of workforce development. It offers a perspective on alternative futures on the jobs of tomorrow—by showing not only the potential pipelines, but also their social and ethical implications for the society.

“There’s currently a lot of attention on AI, machine learning, big data, and robotics, which is important and is changing and will continue to change how we work and organize our workplaces,” says Telliel, noting that automation can have both a positive and negative impact on employees. “It is important that when we think of potential, it’s not only a matter of the number of jobs impacted, but how meaningful those jobs can be and in what conditions people are expected to work—we thus need to also examine the quality of those jobs, the meaning workers get out of new tasks, and, of course, how workers and their communities can benefit from new technologies.”

This ethical framework can be supported by technology, if that technology is conceived and designed with a consideration of long-term social consequences and the relevant data and expertise that can support such consideration.

Equity is at the core of the project, which asks questions such as, “How do we help researchers think thoroughly about workforce development?” Chen said. “Who will these workers be? Is it equitable? Are the pathways equitable? Who has pathways to be in these jobs? Will others be displaced as a result? Ideally, the tool guides a researcher to think through this series of questions,” she says.

Telliel says the scenario-planning tool will be separated into modules. The hope is that engineering researchers thinking of issues of broader impact will be empowered to make revisions earlier in their technology design process, in the early stages, rather than later, to make positive change in issues of gender and racial equity, inclusion of workers with different abilities, empowerment of workers, or accountability and transparency.

“The tool can help researchers navigate this potential broader impact horizon that’s in front of them,” says Telliel. “This is not always on people’s radar. There are workers whose lives will be impacted, so what could be better?”

What attracted her to the project, says Chen, and her motivation, was transforming the traditional ways STEM and STEM education are thought of and in the ways they impact humans.

Citizen scientists
The second project team is Foo and Stanlick, who are assistant professors in The Global School’s Department of Integrative & Global Studies. Their project, which focuses on inclusive practices of citizen science and increasing participation in public scientific inquiry, was inspired by an Interactive Qualifying Project for which they served as co-advisers. Sponsored by the Berlin Project Center, the project examined a lack of diversity in citizen science programs and investigated the barriers to participation.

Citizen science, an important framework for involving laypersons in conducting and exploring scientific research, is a way to gather diverse and wide-ranging data while also including more voices and experiences in the process of scientific inquiry. Participation functions to gather better data and produce more scientific engagement, while fostering environmental engagement and learning.

Stanlick’s and Foo’s ARIS project—“Realizing ‘Full Participation’ in Research Through Responsive Community-engaged Practices and Institutional Change Mechanisms”—focuses on the barriers and opportunities to providing more engaged, meaningful involvement of community members by addressing representation, accessibility, and communication. In particular, the project asks whether some people being excluded from participating and how programs can be designed for more access and engagement.

Their ARIS project will develop a tool that organizations can use to see who is being excluded from participation, says Stanlick. “This could be racial, or by gender … it will help organizations get a clear understanding of who is underrepresented, who is being left out, with the goal of increasing diversity and access to their programs.” Income, transportation, or geography can be barriers to citizen science as well, says Foo. For example, people who live near universities may have more access to programs, libraries, classes, or other resources than those who do not. Also, urban schools may have a high interest in marine issues, but lack transportation to shuttle students to and from the coast for participation. “It’s not that organizations don’t value inclusivity and want to develop a stronger effort to develop their missions.” says Foo, “They may not have the staffing or funding to do so.”

Stanlick says the strength of the science is built on engaging people as participants, with more perspectives making the science—and the pipeline of future scientists—stronger. A lack of representation also means that there are people who don’t see anyone like themselves in roles such as engineers and scientists, she says, which affects future generations.

This is the first group of fellows from WPI to participate in the ARIS fellowship program. All four fellows expect to complete their projects by spring 2022.