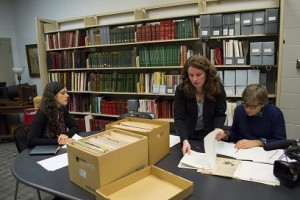 “Success” and “failure” are two labels we often hear in various contexts. Both are loaded terms, intensely subjective, and, very often, interdependent.

One of his deemed “failures,” an artificial sweetener called Miralin that he attempted to bring to market in the 1970s is to be the subject of an upcoming French investigative documentary.

Here was a man who was successful and at times unsuccessful in business. He clearly had some interesting ideas and innovations.
Jess Colati
assistant dirctor of curation, preservation, and archives

Earlier this month, a film crew from the Paris-based production company Let’s Pix spent a day at the Gordon Library, culling through WPI’s extensive Robert J. Harvey collection and shooting segments for the film.

“They were so excited when we opened the boxes—’This is what we’ve been looking for!’” recalls Jess Colati, the library’s assistant director of curation, preservation, and archives.

The roughly 45-minute documentary, hosted by French journalist Guy Lagache, is still in production and is expected to air as part of a larger 90-minute piece later this year, according to Colati. The core focus will be on Harvey’s development and marketing of Miralin, what he deemed a “miracle fruit” natural sweetener, which never came to market because it was ultimately denied FDA approval

Harvey, a Pittsburgh native, West Point graduate, and Korean War veteran, received his PhD in biomedical engineering from WPI in 1970 (WPI boasted one of the few biomedical programs in the country at the time). Beyond his development of Miralin—the subject of his thesis—he also designed the first nuclear-powered artificial heart, which he received a patent for in 1968. The latter took up the bulk of his career; he co-founded the Thoratec Corp. in California, whose Ventricular Assist Device was implanted in patients awaiting heart transplants.

After his retirement in 1996, Harvey returned to WPI to serve as an entrepreneur-in-residence, teaching a course in business that dissected his successful and not-so-successful endeavors. “He had a lot of connections to WPI over a 40-year period,” Colati says.

Harvey’s collection, which was donated after his death in 2012 by his son, Brian D. Harvey, and is permanently organized and housed in the library’s Fellman Dickens Reading Room, is partly digitized and includes extensive records of his entrepreneurial pursuits, papers, theses, lab reports, company records, promotional materials, articles, correspondence, and photographs. According to Colati, it is one of roughly 70 personal papers collections at the library.

“It’s a trove of records related to really what we’d call ‘startups’ today,” she says. “Here was a man who was successful and at times unsuccessful in business. He clearly had some interesting ideas and innovations.”

Colati says she first received contact from Let’s Pix’s researcher-producer Julia Montfort last fall. She was told they were looking for locations that were “key to the Miralin story.”

They arranged to arrive on campus on April 6, and spent about 12 hours in the archives, poring over and filming digitized and as-yet-to-be digitized materials, including Harvey’s papers, FDA reports, early promotional paraphernalia, lab reports, and photographs of greenhouses where the actual “miracle fruit” was being grown.

The goal was to have host Lagache “discover the records, get those moments on film,” Colati explains. “It was a dual purpose of filming and discovering additional information.”

The intrigue is ultimately in Miralin’s demise. Harvey founded the Miralin company to test and market the product, and initially it was supported by the FDA because it was all-natural, says Colati. However, as it proved to be more and more successful, the process lagged; the FDA began to require significantly more testing than it initially indicated would be required, indicating that there might have been some backdoor lobbying or pressure from other artificial sweetener and sugar industry interests, she says.

Before folding the company, Harvey wrote in correspondence about how he was feeling pressured and being “unduly targeted,” says Colati. “He was suggesting that there’s something amiss at the FDA.”

After their visit to WPI, the Let’s Pix crew headed to Washington, D.C., to speak with FDA representatives, and planned to make a few other stops in the states for interviews and research. In the meantime, until the documentary airs, the collection is open to anyone looking to find out more about this unique and innovative WPI alum.

“He had some interesting vision, and he was able to act on it,” says Colati. “He was clearly a very dedicated person—he clearly wanted to help people.”