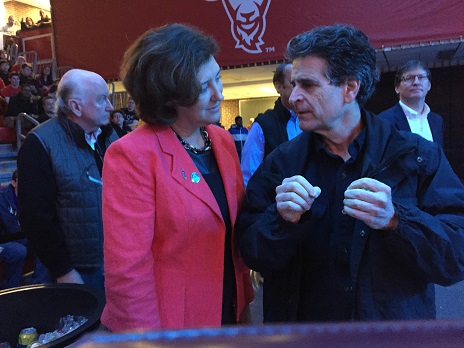 Sixty teams of robots and their high school humanoids converged on the WPI campus April 9–11 for the 2015 FIRST Robotics New England District Championship. The culmination of weeks of designing, building, and competing at the local district level, the event set a record high score of any FIRST Robotics event, according to Ken Stafford, assistant director of robotics engineering.

“You cannot imagine a single other activity on campus that has more positive energy. The best of the best got here, and they are at the best university,” says Stafford. “There are a hundred different tournaments around the world, and we set the highest score on the very last match of the very last day.”

The regional field of 60 teams had been winnowed from 175 through local district tournaments, he says.

A highlight of the event was an appearance by inventor, entrepreneur, and FIRST founder Dean Kamen, who attended WPI and has an honorary degree from the university. FIRST stands for For Inspiration and Recognition of Science and Technology. 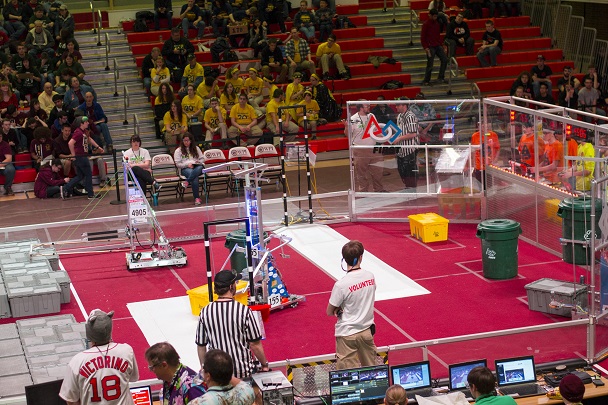 Robot teams prepare to score points by stacking
totes on platforms and capping the stacks with
recycling containers.

“Whenever Dean is here, an entourage follows him. Among [these] high school students he’s a hero,” says Stafford, adding, “He made note of the fact that he is what he is today due to having been a WPI student.”

The theme of this year’s competition is Recycle Rush. The game is played by two teams (also known as alliances) of three robots each. Robots score points by stacking totes on scoring platforms, capping those stacks with recycling containers, and properly disposing of foam swimming pool noodles, representing litter. 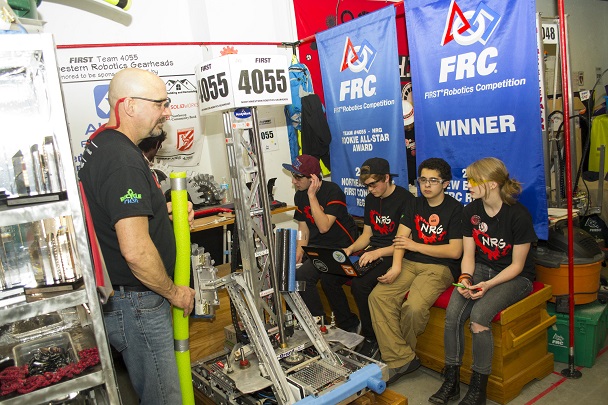 Members of Northwestern Robotics Gearheads
of Winchester, Conn. share ideas in the pits
before rolling their robot out for competition.

In keeping with the recycling theme of the game, all game pieces used are reusable or recyclable by teams in their home locations or by FIRST at the end of the season. The teams play for the mental and technical challenge—and to have fun.

But they are also vying for a chance to move on to the national FIRST championship, to be held in St. Louis this week (April 22–25). Based on points and awards, about 35 teams qualified for this honor, says Stafford. Some ‘legacy’ teams, such as the WPI-190 group from Mass Academy of Math and Science at WPI, advance to the national competition automatically, because of their long history with FIRST Robotics.

According to Stafford, this is the first time the regional competition has been held when WPI classes were in session, calling for an unusual amount of cooperation from many departments on campus. About 2,500 spectators watched the three-day competition in Harrington Auditorium, often with standing room only, he says, noting that year’s popular event “satisfies the vision the administration had when it built the sports and recreation center, to be a national-level tournament location.”