Monday, April 10 offered perfect weather for a variety of things: pick-up games, Frisbee, soaking up the sun with friends, to name a few.

For the Career Development Center and GE it was a beautiful day to talk about women in STEM.

WPI was the seventh stop on GE’s Balance the Equation bus tour, which invited students to have casual, informative conversations with current GE employees, including WPI alumni, about what it’s like to be a woman working in STEM fields. The tour is part of an initiative of the same name in which the company has set a goal to hire 20,000 women in STEM roles by 2020 and obtain 50:50 representation for all technical entry-level programs. 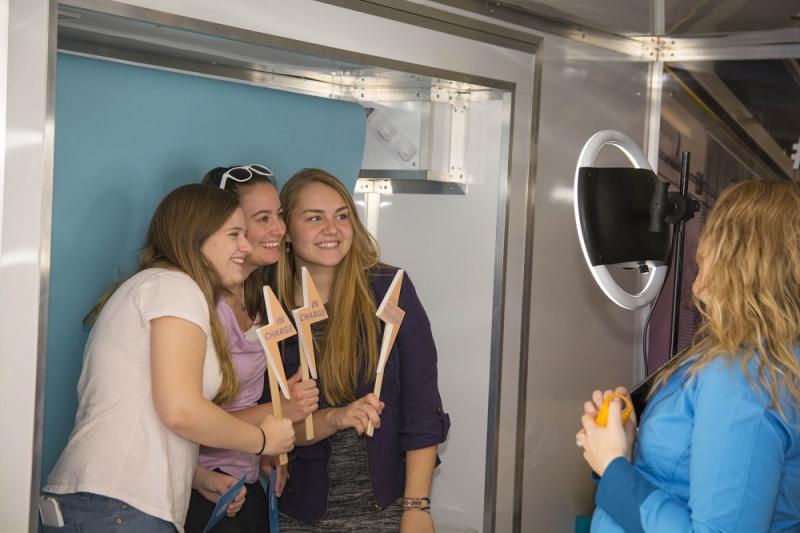 Students pose for a photo together in the GE bus.

The bus offered interactive installations designed to help students determine their thinking styles and work personalities and how to make the most of their skills. The setup also included music, a refreshments table, and an outdoor living room complete with sofas, a coffee table, and books, all in an effort to emphasize a casual, approachable atmosphere.

GE’s decision to have a “low pressure, high impact” presence like the bus tour is the product of past sensing sessions held on campuses, where GE asked students what they like about recruiting efforts and what is or isn’t effective. Through the sessions, they learned that sometimes students just want to have a more casual interaction and talk about the working world in general, as opposed to specific jobs, which is exactly what GE delivered.

“This isn’t a recruiting event,” says Colleen McCormick, global simplification leader of university relations at GE. “Our intent is to initiate conversations and create community building and engagement, encouraging students to stay in STEM.” 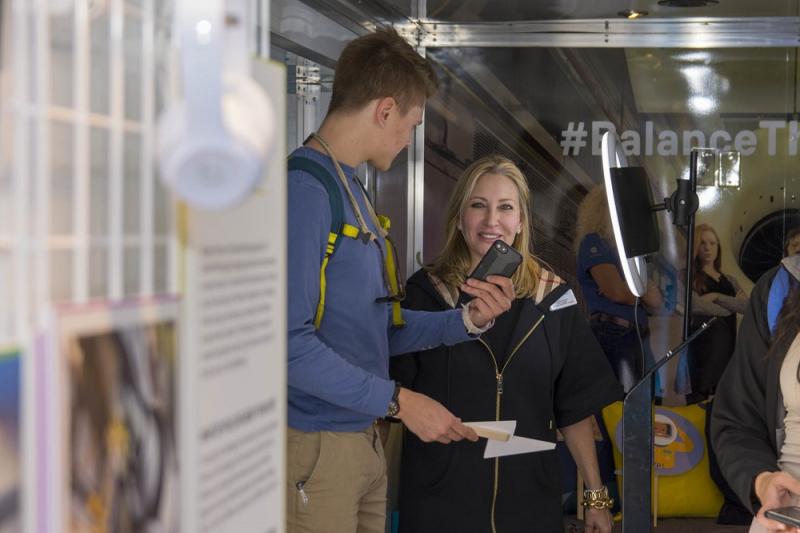 Lorraine Bolsinger with a student.

McCormick and the rest of the GE representatives (all but one of whom were scientists or engineers and who ranged from recent graduates to employees with 30 years of experience to company executives) spent the day answering students’ questions and ultimately building up their confidence, with the goal of provoking discussion around diversity in the workplace.

“Diversity in teams fuels innovation and thought leadership, and solves the world’s toughest problems,” McCormick says. “That’s what we’ve signed up to do as a company, so we want the best diversity and talent on our teams.”

According to both Bolsinger and McCormick, including WPI as a stop on the tour was a given. “WPI has been a great thought leader in attracting the best students in STEM,” McCormick says, adding that as a company, GE regularly finds outstanding talent coming from WPI, and has very strong partnerships with students, faculty, and staff.

Bolsinger knows WPI well; in addition to her position as a trustee, her son is a current undergraduate student. “I love it,” she says. “We have a really nice representation of women engineers here, and women in tech. WPI has done a [great] job.”

Steve Koppi, executive director at the CDC, is proud that WPI was one of eight schools where GE stopped; others included Northeastern, Penn State, and Purdue. “It’s nice to be included [among that list of schools],” he says. “We’re smaller, but we have the same talent and desirability.”