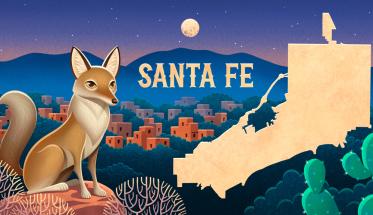 While most of WPI’s project centers offer opportunities for students to conduct project work in far-flung locations throughout the world, IQP students in Santa Fe, N.M., get to experience other cultures without leaving the country.

“It’s like going to a different world,” says Santa Fe Project Center director Fabio Carrera. “And one that most people don’t get to visit.”

Some of the projects focus on New Mexican pueblos—each a sovereign nation with its own language, customs, and rituals.

Carrera helped establish the Santa Fe Project Center in 2009, partnering with local sponsors who are deeply rooted in the Native American community. Sponsors collaborate with WPI faculty and students to tackle real problems that the partner organization would like to solve; they serve as mentors, as well as liaisons and cultural translators for the students.

“It’s a privilege," says Carrera. "It’s very hard to work with native communities. Just the fact that we do projects with them is already kind of an achievement in itself.”

Last fall, Noah Budris '20 and his four teammates worked with the Indigenous Design + Planning Institute (iD+Pi) at the School of Architecture and Planning, University of New Mexico. They were tasked with researching the history of the architecture of Pueblo tribes and designing an interactive museum exhibit. Their goal was to show how the culture of the Pueblo people has both influenced local building styles and evolved over time.

The group worked with light detection and ranging (LiDAR) technology data to create a 3D sculpture of a mission building in Zuni Pueblo. Though the students spent a lot of time in front of computer screens processing and cleaning raw data, a trip to Zuni Pueblo brought the project to life for them, Budris says. They were allowed inside the crumbling mission, a building off limits to even the local community.

“Being some of the few people allowed to go in the buildings and learn from the local people about the history and how it impacts their society definitely made the project more meaningful,” Budris says.

While these teammates were immersed in 600-year-old architecture, others stayed very much in the present, analyzing highway closures to prepare for the advent of autonomous vehicles, using the Internet of Things to update a wastewater treatment plant’s controls, and working alongside avant-garde artists to create an immersive video game for the House of Eternal Return, an immersive exhibition space with interactive storytelling, funded by George R. R. Martin, of Game of Thrones fame.

The eclectic Santa Fe cultural scene is a draw for WPI students who have a strong interest in both the arts and technology, says project center advisor Lauren Mathews. A new partnership with the arts and entertainment collective Meow Wolf promises IQP students opportunities to bridge the two disciplines to create immersive and interactive experiences.

Griffen Spincken '20 admits he struggled to understand Meow Wolf’s niche in creative tourism while prepping for last fall’s IQP. It wasn’t until he arrived and delved into the project that it started to make sense. His three-person team shared a vast work space with other artists while designing and creating a video game that reflects Meow Wolf’s aesthetic.

“It was just amazing to see these skilled people and these exhibits evolving around us.”

They built the game out of wood and plexiglass, incorporating 1.2-inch guitar amp jacks that create various scenarios when connected in different sequences. The game can stand alone or be incorporated into an existing exhibit.

“The beginning of the project was a little bit stressful," Spincken says, "because the guidelines were unstructured and I wasn’t sure exactly what I was getting into. But by the end of the project I was very proud to have worked with these people and to produce a physical deliverable. Our team worked hard for seven weeks to accomplish this, and to receive gratification from people in that field was truly a great experience.”

From Costa Rica to Bangkok to Nantucket, Massachusetts, explore some of our project centers here in the U.S. and around the globe.