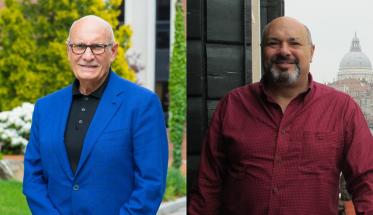 One of the staples of an undergraduate education at WPI is the Interactive Qualifying Project (IQP), a project experience in which students work together to tackle and solve a real-world problem at the intersection of science and technology and society. In addition to local project centers in Massachusetts and other U.S. locations, students may choose to complete their IQPs on campus or at one of over 30 centers around the world—in 19 countries from England and Albania to South Africa and China.

This summer, students have an opportunity to explore a new destination: Armenia.

The brainchild of Diran Apelian, professor and founding director of the Metal Processing Institute (MPI), and Michael Aghajanian ’80, adjunct professor and member of the Foisie Business School’s advisory board, the Armenia IQP is an endeavor years in the making.

Both Apelian and Aghajanian have Armenian roots and clicked immediately upon meeting, like many people around campus had said they would. “It was one of those meetings where you connect with someone almost instantly and you feel like you’ve known them for a long time,” Apelian says.

According to Aghajanian, it didn’t take long after their first meeting for them to start making the Armenia program a reality. “I brought up the idea to Diran a few minutes into our conversation, and right away he said, ‘I’ve been thinking about the same thing for years, let’s do it!’"

“...Armenia could really benefit from getting access to these students, as well. There’s a mountain of projects they could work on, and their work would be extremely impactful for Armenia. The citizens would be very grateful to get those resources.” -Michael Aghajanian

A small country about the size of Maryland with a population of roughly three million, Armenia celebrated its 25th year of independence from the Soviet Union in September 2016, and Apelian is quick to point out the impressive amount of varied opportunities available in the young country. “It’s 25 years old, but it has 3,000 years of history,” he explains. “It’s perfect for students to see the impact of technology on society while figuring out plans, executing them, and delivering results.”

Aghajanian began getting involved with IQPs five years ago, co-advising projects in Melbourne, Australia; Venice, Italy; and Santa Fe, New Mexico. “Each time I was working on projects, I could see that in addition to the great things students get out of it and the satisfaction I get by helping and teaching them, the communities we work in are getting a tremendous amount of benefits from these young, highly intelligent students,” he says. “I realized that Armenia could really benefit from getting access to these students, as well. There’s a mountain of projects they could work on, and their work would be extremely impactful for Armenia. The citizens would be very grateful to get those resources.”

Additionally, Aghajanian says that he hopes the Armenia projects will spur students on to potentially partner with Armenia when working with various companies after graduation. “Armenia was known as the Silicon Valley of the Soviet Union, with all of its technology,” he explains. “Most people aren’t aware of or have much familiarity with it, but maybe the students will look to Armenia someday as a country to partner with in the future.”

Apelian and Aghajanian faced several challenges while creating the Armenia enterprise; complications that ranged from securing housing to determining appropriate sponsors for projects, but one of the biggest hurdles that had to be overcome was the program’s cost.

Because of schedule constraints—as a professor, and due to his work with the MPI, Apelian’s free time is minimal, and while Aghajanian is retired, he’s busier than ever with charitable, business, and academic work—the only feasible time to host the program would be in E-Term. However, students interested in traveling to a project center during the summer have to pay additional tuition. With the decision that it wasn’t fair to penalize the students because of their respective schedule constraints, Apelian and Aghajanian raised the funds to cover the costs.

“We were able to fund the trip for all eight students ... tuition, a round-trip ticket, housing, and a stipend.”

“When Armenians in the ‘old country’ talked about going to America, they meant going to Worcester. WPI has many Armenian alumni and connections with the Armenian community within the city, so this partnership makes sense.” -Diran Apelian

As a young country full of possibilities, Armenia is the perfect place for WPI students to begin their project experiences. Because the center is a pilot program, rather than the usual four to six projects, two are available to students:

My Armenia Cultural Heritage Tourism Program comes from a collaboration between the United States Agency for International Development (USAID) and the Smithsonian Institution. It centers around the impressive amount of tourists Armenia attracts—between 400,000 and 500,000 per year. Most tourists stay in Armenia’s capital, Yerevan, and do not venture out to the more remote regions where there is much to discover. Armenia is a country that has distinct national treasures—architecture, viniculture and the culinary arts, craftsmanship. It is a paradise for birdwatchers—the country has more than 350 bird species (due to the landing of Noah’s Ark on Mount Ararat, according to legend). WPI students working on this project will help develop a website that approaches the goal of increasing tourism in the rural areas through a market segmentation approach.

Armenian EyeCare Project (AECP) will challenge students to build upon Armenia’s Mobile Eye Hospital (MEH), which travels to the country’s remote villages to serve those unable to travel to Yerevan for eye care. The AECP is in the process of building five Regional Eye Centers to provide care on a more consistent basis. The students’ project work will revolve around examining the current situation, researching best practices used to deliver medical care in remote areas of developing countries, and providing recommendations on how to best meet the eye care needs of Armenian citizens.

WPI’s support of these IQPs is very fitting, due to the fact that the city of Worcester is home to a prominent Armenian population. “When Armenians in the ‘old country’ talked about going to America, they meant going to Worcester,” Apelian says, citing the vast historical and cultural connections to Armenia throughout the city. “WPI has many Armenian alumni and connections with the Armenian community within the city, so this partnership makes sense.”

After spending just a short amount of time with Apelian and Aghajanian, I could see their passion for and dedication to the Armenia projects; seeing their efforts come to fruition is exciting—and for Apelian, it was almost as if the stars had aligned to set everything into motion. “When those things happen in life, you should grab them,” he says. “When those opportunities come, you should do it.”