• He is commonly known as the school’s mascot, but Gompei was a real person, an extraordinary human being. Gompei Kuwada was a member of the WPI Class of 1893. 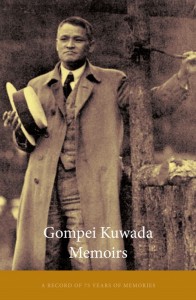 A book about the legend is now official—the unveiling of Gompei’s Autobiography will take place today, Oct. 10 at 4 p.m. in the Gordon Library. It’s only fitting that it happens on Homecoming weekend. The genesis for getting the book published occurred on such an occasion.

WPI Executive Director of Alumni Relations Peter Thomas, the book’s de facto publisher, who worked in partnership with the Gordon Library, explains: “In the summer before the 2011 Homecoming, we received an inquiry from a Japanese professor by the name of Arata Ichikawa. He wanted to visit campus because his great-grand uncle had played football here. His great-grand uncle happened to be Gompei Kuwada.”

Ichikowa was aware of Gompei’s football career, having read his uncle’s memoir. “In the book, Kuwada talks about having been the quarterback for the team in 1890s,” says Thomas. “After sustaining football injuries, he became the ‘goat keeper,’ or holder of the mascot.”

As legend has it, the mascot was named after Kuwada because of his initials, G.K., as in goat keeper. Thomas says the reason Ichikawa was so fascinated by Kuwada’s football playing is that he is credited with being the “Father of American Football” in Japan. “He was a professor at the University of Tokyo and established the team, the Warriors, which still exists today,” says Thomas.

After discovering that his Japanese ancestor had been involved in the sport in the 1890s, Ichikawa made a call of inquiry to WPI. “He came to campus for Homecoming in 2011 and was amazed to see ‘Gompei’ everywhere on campus,” says Thomas. “After the visit, he made available Gompei’s memoirs.”

The Library holds the Japanese edition of these memoirs; Timothy Momose ’13 is responsible for the English translation. Library archivist Molly Bruce says that in the spring of 2013 Fiona Ogren ’15 scanned every page to create a digital version from which the translator could work.

Momose, who grew up in Japan and was fluent in both Japanese and English, spoke with Thomas about doing a translation, completing it over the course of his last D-term at WPI and the following few months of summer before he started graduate school. Because it was written in the 1940s by a man born in the 1870s, the autobiography uses some language and references that are confusing to the modern reader, Momose says. The translation process required some research to figure out how to read the old kanji (Chinese characters used in modern Japanese) and to understand Kuwada’s context before he could accurately restate his words in English.

“… Translating Mr. Kuwada’s autobiography was a very worthwhile experience for me,” Momose says. “His story is one of strong friendship, the persistent pursuit of a dream, and lifelong learning. As a student from Japan who is studying in the United States, I was able to particularly connect with Mr. Kuwada’s experiences of adapting to a new culture and adapting back to his native culture after his return. I think that Mr. Kuwada’s life story can speak important lessons to whoever reads it, and I hope that my translation has preserved the depth of the original autobiography.”

Thomas says the “cool thing about the book is that it details the life of an incredible entrepreneur. Gompei was a spindle manufacturer in Japan and helped standardize the industry. He traveled all over the world to learn about new technologies, bring them back to Japan, and retool his factory.”

Naturally, the book chronicles G.K.’s time at WPI. Speaking academically, Kuwada wrote: “I consider it one of the greatest blessings of my life that I could study under the care of the learned, good-natured, principled professors at WPI.” Commenting on his athletic career, he said, “I played a little football, but I stopped after I had a dangerous accident. … In one game, a large player came at me, and fell on top of my neck. … I stopped playing football after that.”

Thomas says the book will not be widely distributed. “There will be copies for the library. There will be a select number of copies used as appreciation gifts and the bookstore has asked for some to sell. It is going to be a very limited publication.”

Ichikawa wrote the postscript, in which he says, “It is nearly impossible to hear that a college and/or university would publish the diary of an alumnus, even if he had been awarded a Nobel Prize. However, here is an English version of such a book—the memoirs of a foreign student—one of an alumnus of 120 years before.”

In conjunction with the book’s Homecoming release, WPI will also unveil a second goat statue, the Charging Goat, a gift from the Class of 2013, on Saturday, Oct. 11, at noon.