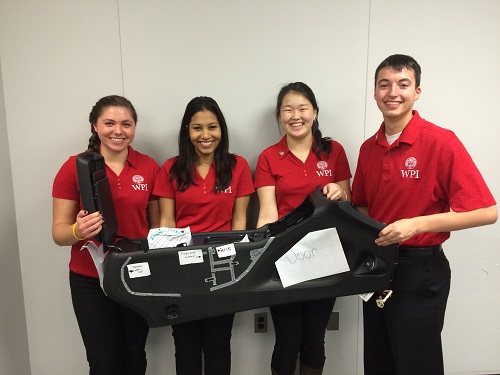 For the first time ever, WPI sent a team to the Innovation Encounter, an intercollegiate competition focused on problem solving, innovation, and entrepreneurial skills at Lawrence Technological University just outside Detroit.

The four-member team included juniors Keith Guay, Kate Piotrowicz, Michelle Acevedo, and Dulguun Gantulga. They said the Oct. 24-25 competition offered challenges that utilized all the skills they’ve learned at WPI and will help get them ready for life in the working world.

Guay said that when Glenn Gaudette, associate professor of biomedical engineering, proposed the idea of assembling a WPI team to attend the Innovation Encounter, he was intrigued. After gauging interest, Guay pulled together a team with experience in biomedical, aerospace, and mechanical engineering. “It’s like a mini IQP in 24 hours,” Guay said. “Kate and I just completed our IQPs, but it’s nothing on the scale of doing it this quickly.”

This year’s Innovation Encounter sponsor was Faurecia, one of the largest automotive parts companies in the world. Eight teams from around the country attended, including teams from Bucknell University, Kettering University, and Lawrence Tech. All had a problem to solve, which was kept under wraps until they arrived on campus. Each team had a toolkit and access to coaches, and even a problem-solving workshop to help them in the fast-moving process in which creating a business plan to solve the particular problem and an oral presentation were required.

“The competition was very challenging,” Guay said. “I know personally, I have never considered business and entrepreneurial to be a huge part of engineering, and it was. We were automotive engineers, because the problem that Faurecia gave us was creating a new and improved center car console for the BMW series.

“Our team, unfortunately, didn’t win, but we focused on making a design that would be able to be implemented commercially while also focusing on security, protection and convenience. Our team was very proud of our accomplishments. This experience was so rewarding, and we are going to take what we learned with us into the workforce.” 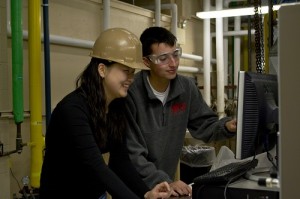 Heading into the unknown lends excitement to the challenge, said one team member. Bringing no supplies or tools with them, the project-based training in their undergrad studies was good preparation. “It’s a new sense of what we can do with 24 hours to come up with a solution,” Piotrowicz said.

Gaudette agreed. “The preparation for these students started when they first set foot on our campus,” he said. “The project-based education that they have been receiving is the best preparation for this competition.” Gaudette said the seven-week terms teach the students how to work efficiently, and the project work builds the skills needed to work as a successful team.

“This competition allows WPI students to demonstrate their creativity, innovation, and entrepreneurial skills,” said Gaudette, who was attending a conference and unable to attend the competition. “In addition, they get to see how other universities from across the U.S. approach problems.”

Both Guay and Piotrowicz said the realistic expectations of the competition will help prepare them for the workforce. “I am excited to think quickly on my feet,” says Guay. “In the workforce you have to think like that.”

And as happy as Gaudette was to send out a well-prepared team to act as ambassadors of the university, the students are thankful for the opportunity. “The support from WPI has been amazing,” says Guay. In addition to the chance to go, and the funding for the project, WPI has offered the know-how for the students to feel confident. “We’ve been really set up with all our classwork,” he said.