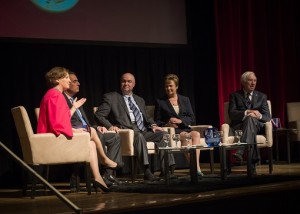 The WPI community held a celebration on April 15 for being awarded the prestigious 2016 Bernard M. Gordon Prize for Innovation in Engineering and Technology Education. The Gordon Prize was given to WPI by the National Academy of Engineering (NAE).

The events included an hour-long panel discussion, “Perspectives on Engineering Education: A Conversation,” in Alden Memorial. President Laurie Leshin moderated the program with panelists Rick Vaz, dean of interdisciplinary and global studies at WPI; Mark Russell, a member of the WPI Board of Trustees and corporate vice President of engineering and Technology and Mission Assurance at Raytheon; Lynn Pasquerella, president of Mount Holyoke College; and NAE president C.D. Mote Jr.

Leshin introduced the panel, saying she was glad the celebration was being led off with a conversation about the future of engineering. “Conversations like this are becoming more important and more urgent every day as our nation continues to grapple with complex challenges that call on engineers for solutions,” she said.

“I’m referring to challenges like the Flint water crisis, the large number of veterans returning from Iraq and Afghanistan needing smart prosthetics, cybersecurity lapses, and the need for sustainable sources of clean energy, to name just a few.”

I stand here on behalf of our colleagues who more than 40 years ago launched a new paradigm, and showed the tenacity required to keep that program alive.
Professor Diran Apelian,
speaking of the WPI Plan

When asked what important skills a young engineer entering the workforce will need, Russell cited some of the attributes WPI graduates acquire in the course of completing their Interactive Qualifying Projects and Major Qualifying Projects. He cited students’ work around the globe and collaboration in interdisciplinary teams. He said that schools that are practical and hands-on produce graduates that are generally ready when hired to tackle problems, and are most valuable to industry.

“They see things that work, and don’t work and how to solve the problem,” he said of WPI project students. “They are ready, almost immediately, for industry. They will show up ready to attack a problem.” 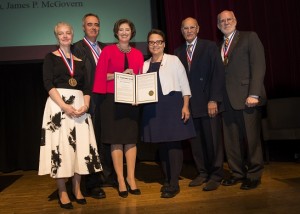 Vaz was asked how WPI engineers are prepared for the workforce and to solve the world’s complex problems. He said the varied problems of clean water, public health, and feeding the world, among others, require some common skills.

“The big, messy problems related to the environment, food and water, security, public health—these problems have a lot in common,” he said. “They’re interdisciplinary, very complicated, and will require a lot of people coming together.”

When WPI launched the WPI Plan some 40 years ago, the architects of that plan may have envisioned what lie ahead for engineers, he said.

“If you want people who can solve challenges, get them involved as students,” he said.

Vaz pointed out that more than 22,000 WPI alumni have gone through the project-based curriculum laid out in the WPI Plan, and survey results show that it has a long-term impact on leadership, problem solving, teamwork, and communication. “They developed stronger personal character, sense of commitment, and belief in their own ability to make a difference,” he said. “They need to understand the big picture so they can ask the right questions.”

In speaking about a perceived lack of engineers, Mote cited the increasing demand. “Everyone on the planet is recruiting engineering talent, with great vigor. Every company, every university, every government, and it’s not just the United States. You can’t go any place without recruiting talent,” he said.

“The question is: What is wanted—what’s in demand for talent? This is because of accelerated change, the need to develop products quickly. … It’s getting people who are ready to move quickly and work right away. That puts a lot of pressure on universities and colleges to have programs that nurture what I call in-demand talent. You can’t divorce yourself from the needs of the marketplace or the world, and the pace at which it’s going. They’re not looking for narrowly defined talent, but resilience—an understanding mindset that things are going to change.”

Pasquerella was asked how liberal arts institutions can prepare more capable engineers. She said that the ability for engineers to overcome the psycho/social hurdles a society may present is crucial to implementing an engineering solution.

“The liberal arts are more important than ever before. We live in a globally interdependent, rapidly changing world,” she said. “With rapid advances in technology come rapid obsolescence. A liberal arts education teaches them to write and think and speak with precision, coherence, and clarity—to become adaptable and flexible in the face of this rapid change.”

The award ceremony followed, with Mote introducing Bernard Gordon and Diran Apelian, Alcoa-Howmet Professor of Mechanical Engineering, who offered his remarks in accepting the award on behalf of the university and the four individual recipients. 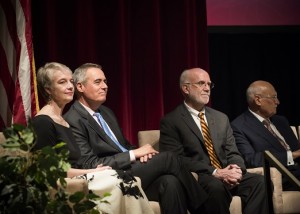 Apelian cited the courage of those who pushed for the WPI Plan and drew applause in citing the influence of the late William Grogan, often referred to as the father of the WPI Plan.

“I stand here on behalf of our colleagues who more than 40 years ago launched a new paradigm, and showed the tenacity required to keep that program alive.

“… William Grogan … was the individual most responsible for its initiation, success, and growth. Our only wish is that he were with us today to relish this award. What collectively has been done is quite remarkable. We encourage our young women and men to become part of the solution, impacting the most important challenges our society faces.”

The Gordon Prize includes a $500,000 award, half of which will go to the university to create the Center for Project-based Learning “in support of the continued development, refinement, and dissemination of The WPI Plan.” The other $250,000 is shared by four faculty leaders who have advanced the WPI Plan to new levels of innovation and opportunity. They are Vaz, Apelian, Art Heinricher, dean of undergraduate studies, and Kris Wobbe, associate dean of undergraduate studies.