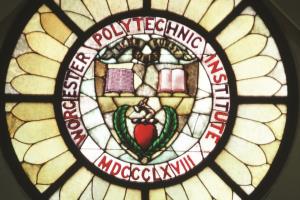 Worcester Polytechnic Institute (WPI) today recognized six members of its academic community during the university's annual Honors Convocation. The awards, including four distinguished honors bestowed annually by the WPI Board of Trustees, recognized five faculty members and a graduate student for outstanding teaching, outstanding research and creative scholarship, outstanding academic advising, and exceptional service to the community at WPI and beyond the campus.

Kent P. Ljungquist, professor of literature in the Humanities and Arts Department, received the Board of Trustees' Award for Outstanding Teaching. Established in 1959, the award recognizes faculty members for excellence in teaching coupled with outstanding professional contributions. Ljungquist teaches the works of Edgar Allan Poe and other authors of supernatural fiction, surveys the broad spectrum of American literature, and introduces students to realism and regional authors. Described as a master teacher, he uses patience, kindness, and wit "to ease even the most reluctant participants into provocative classroom discussions," his citation noted. "In his courses, students learn how to identify the most revealing literary passages, how to trust their own thoughts, and how to express them in written ways that do justice to their originality." His teaching can have a lasting impact on students. As one noted, "Professor Ljungquist made reading interesting for me again!"

Richard D. Sisson Jr., George F. Fuller Professor of Mechanical Engineering, director of WPI's Manufacturing and Material Engineering Programs, and technical director of the Center for Heat Treating Excellence, received the Board of Trustees' Award for Outstanding Research and Creative Scholarship. The award recognizes continuing excellence in research and scholarship by faculty members over a period of at least five years. Sisson is internationally recognized for his research in materials science and engineering and manufacturing. His pioneering work, spanning several areas of physical metallurgy research, has resulted in more than 250 journal articles and more than 250 technical presentations. He is currently principal investigator for a multi-million-dollar, multi-institution project funded by the U.S. Army aimed at developing new metallurgical methods and new lightweight alloys that will help the military build more effective and durable vehicles and systems. Sisson he has won numerous national and international awards, including being named a fellow of ASM International and serving as president of the ASM Heat Treating Society.

Jon Abraham, professor of practice in mathematical sciences and coordinator of the Actuarial Mathematics Program, received the Board of Trustees' Award for Academic Advising, which recognizes the important role that academic advisors play in guiding and mentoring students through stages of professional and personal development. A fellow of the Society of Actuaries, Abraham won the advising award once before, in 2007. Described in his citation as an excellent advisor who cares deeply for students and “works tirelessly, beyond the call of duty,” he uses his experience in industry to give advisees a strong foundation in their discipline and opportunities to use their knowledge in the working world. It is said that he meets students where they are and helps them build a bridge to their goals. Abraham's citation included a number of statements from students he has advised, including one who notes, "This isn’t simply a job for him—it’s a passion."

Brian Savilonis, professor of mechanical engineering, received the Denise Nicoletti Trustees' Award for Service to Community. Established in 2003 in memory of WPI’s first tenured female faculty member in electrical and computer engineering, it is presented to a member of the faculty or staff in recognition of passion and action in serving the needs of a community. With a passion for running and coaching, Savilonis is the longtime coach of the university's men's and women's cross country teams and also helps coach the track and field teams. His citation notes that he "created a strong community among the student athletes of these teams by encouraging the teams to support each other and other athletic teams across campus. He instilled in his athletes the importance of making a difference in their communities and then supporting their decisions to do so by rearranging practice schedules to accommodate these commitments." Savilonis helped found WPI's Frontiers summer enrichment program and also assists at Special Olympics and area high school track meets, as well as many community racing events.

Dirk Albrecht, assistant professor of biomedical engineering, received the Romeo L. Moruzzi Young Faculty Award. Presented in memory of a longtime faculty member in electrical and computer engineering, the award recognizes innovation in undergraduate education. He was honored "for his innovative efforts to enhance student engagement through hands-on learning in a large enrollment bioinstrumentation course," his citation said. Recasting a challenging course typically taken by sophomores, Albrecht developed lab assignments that students compete on their own using inexpensive Arduino kits. Students apply the principles, theory, and equations presented in class to assemble their own electrocardiograph (ECG) instrument from scratch and then test them by measuring their own heart signals. "Professor Albrecht’s ambitious and bold course redesign demonstrates that significant hands-on learning experiences are feasible in large undergraduate classes and have substantial benefits for students," his citation noted.

Brittany Neumann, a graduate student in chemistry and biochemistry, received the Teaching Assistant of the Year Award, which recognizes the contributions graduate students make to the quality and success of WPI’s undergraduate curriculum. Neumann was honored for her exemplary support of the course Experimental Chemistry over several years. She was the only teaching assistant who learned the course material from Professor Robert Connors, who passed away in 2015. Her knowledge of the laboratory experiments and course software enabled the course to continue and students to have a meaningful learning experience while the course was reworked. "She performed her duties with sensitivity, resolve, and maturity, and never once considered how the extra demands on her time would inhibit her own studies or slow down her own research," her citation noted.