Harvesting a Simple and More Effective Treatment for Malaria 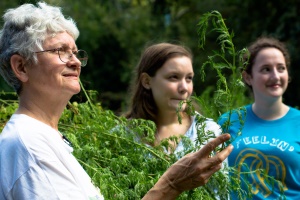 In medicine as in life, sometimes simpler is better. That's the philosophy that is driving the current research of Pamela Weathers, PhD, professor of biology and biotechnology at WPI. And it's an approach that may produce a more economical and effective treatment for one of the most prevalent and deadly infectious diseases of the developing world.

For more than a decade, Weathers has been working with a plant that produces a compound that is the only remaining effective treatment for malaria, a mosquito-borne parasitic infection that afflicted nearly 220 million people in 2010, according to the CDC. The plant is Artemisia annua (commonly known as sweet Annie or sweet wormwood), and the compound is artemisinin. 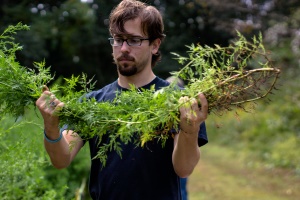 The process of extracting artemisinin from the sweet Annie plant, purifying it, and packaging it as a pharmaceutical (particularly when the compound is combined with other antimalarial drugs to make it less prone to resistance) is expensive, and the drug is frequently in short supply. In her recent research, Weathers has been exploring a novel way to turn the plant that produces artemisinin, itself, into a medication, which would bypass the need for the costly extraction process and generate a number of other benefits.

For example, using the dried whole plant could greatly expand access to antimalarial therapy, Weathers says. "Artemisia can be grown readily in most climates," she says. "It is a relatively simple process to harvest the leaves, pulverize them, test samples for their potency, measure out doses, and put them in capsules. This could become the basis for local businesses and would be a wonderful socioeconomic stimulus in developing countries." 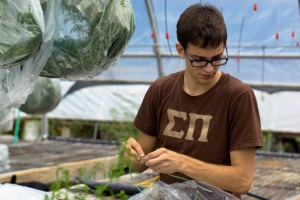 At harvest's end, the plants are hung in a
greenhouise to dry

In addition to making a potent malaria treatment more widely available for a lower price, encapsulating the whole plant may produce a treatment that does a better job of combating the malaria parasite than purified artemisinin, as Weathers and colleagues at the University of Massachusetts reported recently in the Journal PLOS One. They found that powdered dried leaves from Artemisia annua delivering 40 times more artemisinin to the blood and reduced the level of parasite infection more completely in mice. The effectiveness of the whole plant may be due, in part, to the presence in the leaves of other compounds, including flavonoids also known to have antimalarial abilities.

Weathers and her students recently harvested a new crop of Artemisia annua from a plot on small farm in Stow, Mass., and then hung it in a greenhouse to dry. The plant will become the raw material for ongoing work in Weathers's lab that will help bring the dream of a powerful, cost-effective, widely available—and simple—malaria treatment closer to reality.