When Tiffiny Butler was considering postdoctorate opportunities, she knew one thing above all else—she wanted to work with biomedical engineering associate professor Karen Troy. When Troy came to WPI two months before Butler received her degree, Worcester suddenly became Butler’s next stop in her academic path.

She didn’t know what to expect at this New England campus, but eventually it became home. “I came for Karen,” says Butler, “but I stayed for the community and for how people think about tackling problems here.”

Butler recently assumed the role of director of the Office of Multicultural Affairs (OMA), a role she now holds in tandem with working as a teaching professor in biomedical engineering. The two roles, she says, mesh perfectly with personal and professional goals. “I love how people at WPI work collaboratively to solve global problems,” she says. 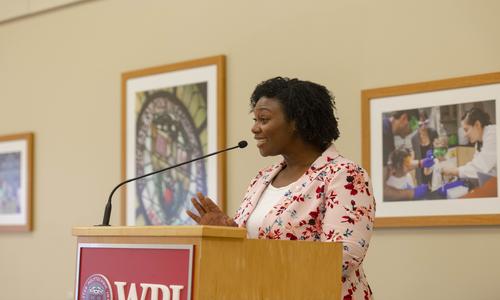 OMA Is for Everyone

Her goal for OMA, one that resonates in her classrooms as well, is to have a campus community that sees diversity and seeks to celebrate that diversity through inclusion. “OMA isn’t just for specific students,” she says. “We might serve traditionally underserved populations, but we are also here as a resource for friends, family, or colleagues that support people from these populations.”

OMA is an excellent resource for students who are of any race, ethnicity, religion, gender, sexual orientation, age, socioeconomic status, and physical ability. But, Butler says, it’s also a place where anyone is welcome and wants to make an impact in equity and inclusion of all people.

“Student populations change,” she says. “To be fully aware of the students and how they are being supported, all of us need to feel like we are part of this solution.”

Finding a Support Network Is Critical to Success

Butler says her own experiences as a post-doctoral fellow and now as a faculty member at WPI help her in her OMA role. When she was a WPI newbie, she sought out others like her—specifically, students of color and first-generation students—to build a community. She understands how valuable shared experiences are and how connecting with others who have similar life circumstances is especially beneficial in college.

But she also knows student networks are as complex as they are essential to a student feeling supported—bringing that all together is vital. “Any time there are changes like this, students especially struggle because everything is new and sometimes they can feel like they are the only one experiencing the struggle they are feeling,” says Butler, noting the move to college can be especially tough. “But the community of WPI is receptive to being supportive of folks who maybe are not exactly like themselves.”

Butler also supports the programs that help students directly. She is the principal investigator on the Louis Stokes Alliance for Minority Participation (LSAMP) Scholar Program at WPI, an NSF-funded program that offers financial and professional development support for historically underrepresented students who are in the STEM fields. She is also the principal investigator on the recently awarded  S–STEM grant, a scholarship program designed to support first-generation students from the Worcester public schools who attend WPI. She will be working with co-investigators Kristin Tichenor, senior vice president of enrollment management, and Kathy Chen, executive director of the STEM Education Center, to support the Great Minds Scholars (part of the American Talent Initiative at WPI), with co-curricular scholarship programming.

Teamwork Makes All the Difference

At WPI, she wants to know the living, working, and academic experiences students of color might be having and find out how to make them better. “It’s important for me to be in a space and to go into spaces where I feel like I belong," she says. "As an institution, the way we approach education and our incredible approach to teamwork is critical when we look to expand inclusivity on campus.”

“It’s not about compromise. It’s not you give up something and I give up something. It’s collaboration—we both have a synergistic mission, so let's each give 100 percent and then when it's all said and done, we end up with something that is 200 percent for the good of both of us.” -Tiffiny Butler

The teamwork so ingrained at WPI is something Butler plans to emphasize with the different affinity groups associated with OMA and collaborative partnerships throughout campus. “In forethought, there’s inclusion," she says. "If OMA and the students are fully aware of who we are and what we are each doing to celebrate our distinct identities, maybe they can find opportunities for collaboration and celebrate together.”

This kind of approach allows for more networking and relationship building, and can expose ideas where groups can work together for a more impactful result. “For OMA, that’s a better way for us to prepare and be more conscious of the resources we are using for maximum impact for ourselves and each other,” says Butler. “For the students, they are building a framework for setting up better support structures and that’s essential professional development.”

The OMA professional staff will have office hours beginning in A-Term, either with Butler or with Rachael Heard, assistant director of OMA. These office hours are a way for students to be able to ask questions or find assistance in getting the resources they need. “Knowing you can find help means you are comfortable asking for help,” says Butler. “We want to create that kind of atmosphere and plug students into resources. To do that, we have to be having these informal, relationship-building conversations.”

Butler takes advantage of all the resources in the Worcester consortium of colleges as well, always looking to see what other schools are doing to help serve their students and make their experiences better. She also is looking at how to make sure OMA events are inclusive and welcoming to the community—frequently asking “Are the events varied and creative and reflecting the identities of the folks we serve?” One ways she informally evaluates this kind of success is when people stay and mingle after the event has officially ended. “During NSO, we had three networking receptions,” says Butler. “There was a buzz in the room, the students were practicing their networking, and folks were so comfortable talking they lingered even after the event had concluded.”

Butler’s holistic view—of students, of the campus community, and of the work done at WPI—means she sees the sum as greater than the parts. There’s no negative in a community where everyone is supported.

“It’s not about compromise,” she says. “It’s not you give up something and I give up something. It’s collaboration—we both have a synergistic mission, so let's each give 100 percent and then when it's all said and done, we end up with something that is 200 percent for the good of both of us.”

Editor's Note: This story has been updated with a post-script at the end of the article. It was originally published on Sept. 17, 2019.

OMA had a busy year of events and cultivating collaborations, says Professor Tiffiny Butler, OMA director. Grants included financial support for programs around mentoring, building connections, and establishing inclusive communities that provide supports for first-generation students. Adding community resources at the Gordon Library, collaborating on pre-collegiate STEM workshops, and forming inclusive community councils and Conscious Coffeehouses helped bring equity and inclusion to our students. “We can do many things in many different ways,” Butler says, “but what’s most important is that we do what we said we would do. I believe we have for this phase of the strategic vision. I’m excited for the next steps to come at OMA!”