When it Comes to Competition, He Jumps at the Chance. 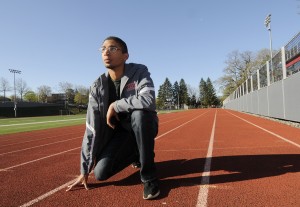 For the last two years, at least, April has been a good month for Wesley DeChristofaro.

In 2012 the WPI track & field runner earned NEWMAC Men’s Field Athlete of the Week honors for winning both long jump and triple jump at a meet in Fitchburg.

This year he was so honored again after taking first place in the high jump at the Coast Guard-Springfield-WPI tri-meet in Springfield April 14. And those are only two of his impressive list of track & field achievements.

The junior, who hails from Woonsocket, R.I., specializes in the high jump. It was a leap of 6’4” that helped him earn first place at the Springfield meet. Surprisingly, though, DeChristofaro considers himself more of a long jumper.

“I am a long jumper first; I just have not long jumped yet this outdoor season,” he says. In high school, he won his only state championship in the long jump. 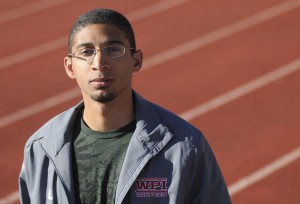 Track & field was a natural destination for DeChristofaro, His first sport was soccer, so he was no stranger to running. In sixth grade he began competing in cross country. The next year he joined his middle school’s track & field team because “it seemed like a better fit.” That’s when he earned the first of what would be many athletic honors. The first year he did the high jump, he placed second in Rhode Island’s state middle school track competitions. He went on to participate in track & field straight through high school.

His strong competitive spirit no doubt has much to do with success over the years. “I never enter a meet without the intention of winning,” he says. “Whether it will be a battle for first or not, I expect to win. I show up to compete against myself, the clock, and the measuring tape.”

For all of DeChristofaro’s accomplishments to date, his coach believes he’s far from finished. “Wes is by far one of the most athletic talents our team has seen in a long time,” says Brian Chabot, WPI track & field head coach. “He is regularly ranked in the top 25 of his events in the country and I expect him to compete in couple NCAA championships before his time with us is through.”

That competitive spirit extends beyond the track. From age 11 he has been a competitive shooter. He carries an expert qualification in high-power rifle and was approaching master class before heading off to WPI. Upon beginning his studies here, DeChristofaro decided it was time to give up shooting and focus on academics and athletics.

An electrical and computer engineering major with a minor in physics, he completed his IQP focusing on the implications of hydraulic fracturing. He is already looking forward to next year’s MQP, which he says will be on a power systems topic.

As for plans after graduation, DeChristofaro says he’s not completely sure.

“I’d like to work on the analog side of electrical engineering, and I’m especially interested in the power systems area, but I still have a lot to learn. I do plan on working somewhere along the east coast if possible.”