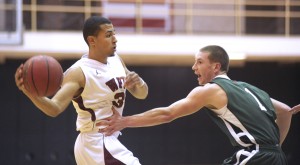 The Engineers, who were making their seventh NCAA Tournament appearance in the last nine years, end their record-setting 2013 campaign at 26-3 overall.

Randolph Macon drained nine of their first 12 shots from the field en-route to a 21-14 advantage with 10:44 remaining in the opening half. The Yellow Jackets led 28-17 two minutes later, when WPI started to climb back. Domenick Mastascusa (North Reading, MA) netted three straight buckets to help the host team, which was playing at nearby Assumption College’s Laska Gymnasium due to a scheduling conflict .  The Engineers trail by seven with 5:44 remaining, but Randolph-Macon maintained their distance and led by as much as 10 points on three separate occasions before intermission, settling for a 39-30 edge at the half.

After the break, the Yellow Jackets advantage peaked at 44-30 early on before the Boynton Hillers rallied and made it a six-point game with 12:13 on the clock.  Following a three-pointer by Coppola to make it a five-point game 2½ minutes later, Randolph-Macon rattled off consecutive field goals for the 59-50 edge with 7:32 remaining.

One minute later, Kolb hit a three at the top of the arc to help the Engineers trail by six, but the Yellow Jackets responded with a 10-3 run to open up a 69-56 score with 2:37 left in the game.

WPI used a mini 5-0 spurt for one final push which was finished off by a Karalis trifecta to make it a seven point contest (71-64).

Randolph-Macon sank eight of their last 10 tries from the charity stripe, however, to seal their second trip to the sectionals in the last four years.

The Yellow Jackets were on fire from the field for the game as they connected for a season-best 59 percent from the field (29-for-49) – including a blistering 65 percent effort in the second half alone (13-for-20).

WPI posted a modest 40 percent shooting percentage from the field (26-for-66), but only sank 10 of their 31 attempts from downtown (32 percent) and six of their 13 tries from the charity stripe. Randolph-Macon also dominated the glass (42-23) and led in second chance points (11-6). The visitors ended the contest canning 74 percent of their attempts from the free throw line (17-for-23).

The Engineers also used nine swipes to force 18 miscues into a 24-11 edge in points off turnovers.