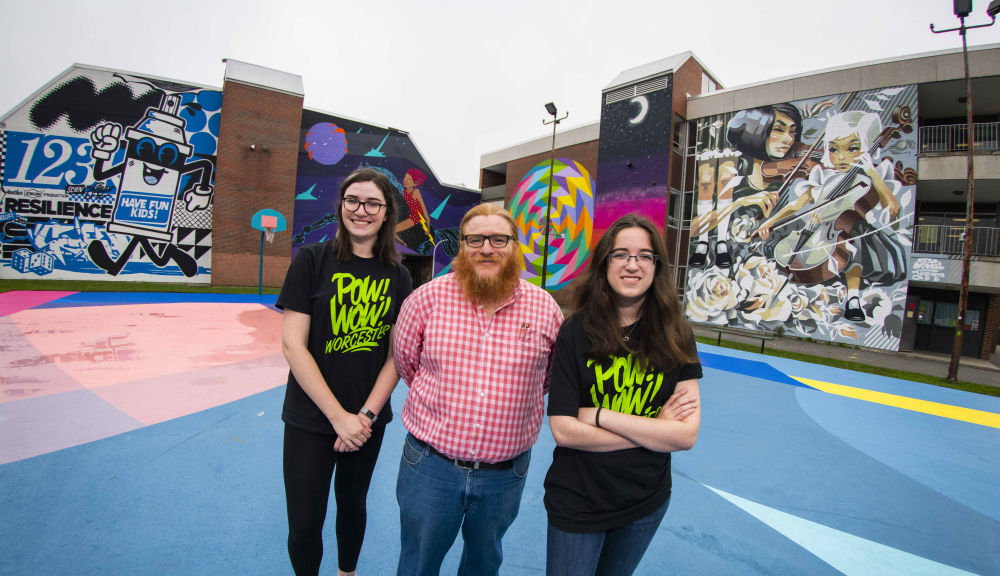 The recent explosion of vibrant street art and murals throughout Worcester had associate teaching professor Joseph Cullon and a team of students wondering how to connect this celebration of public art with the city’s historical and cultural growth.

The answer: an interactive mural tour for POW! WOW! Worcester––a city-wide effort to bring in more cultural enrichment and artistic vitality by recruiting local, national, and international artists to paint murals on walls through the city.

The website created by Cullon, Sarah Kwatinetz ‘21, and Brittany Goldstein ’21 over the summer is an extensive, heavily researched catalog of the POW! WOW! murals painted at 22 locations in 2016 and 2017. It employs brilliant photos, archival images of the buildings on which the artwork is painted, text describing the historical and cultural significance of mural locations, links to artists’ web pages, and interactive digital maps that locate and provide directions to the sites.

They are now in the process of finalizing information about the most recent murals, created between August 31 and September 9 by 32 artists on 27 outdoor surfaces at 17 sites.

“The reason we undertook this is we often think of things in separate boxes,” says Cullon. “History is often narrated separately from current cultural events. We’re trying to create a system that brings together the conversation and extends it so it’s not just about the moment of the present but it also connects to the city’s past.”

The introduction of historical and cultural elements on the website makes the presentation of the murals more than just a list; Cullon sees the site as a way of not only putting the murals in some kind of historical perspective, but also preserving information about the creation of the artwork as a part of Worcester’s story.

“The city is a historical document itself, and it’s constantly being edited and changed,” says Cullon. “And I think when you look at the collective work of the [mural] sites, which is only made possible when you’re stepping back, you can see the way in which in particular moments the city has been reinvented. For example, many of the buildings with murals went up as part of urban renewal in the second half of the 20th century. This is no accident and it comes that POW! WOW! is just another moment when we’re reinventing the city and what it means.”

“We often think of things in separate boxes. History is often narrated separately from current cultural events. We’re trying to create a system that brings together the conversation and extends it so it’s not just about the moment of the present but it also connects to the city’s past.” -Joseph Cullon

He notes that some of the murals painted in 2016—including the Palladium, the Hanover Theatre, and the YWCA—have been painted over. “I’m concerned about what happens to the murals after they’re painted and the way we think about them as one piece of a longer story of the city,” he says. “So the website also becomes a way to preserve the history of the moment that created those murals and the way in which those murals existed in the city for two years.” 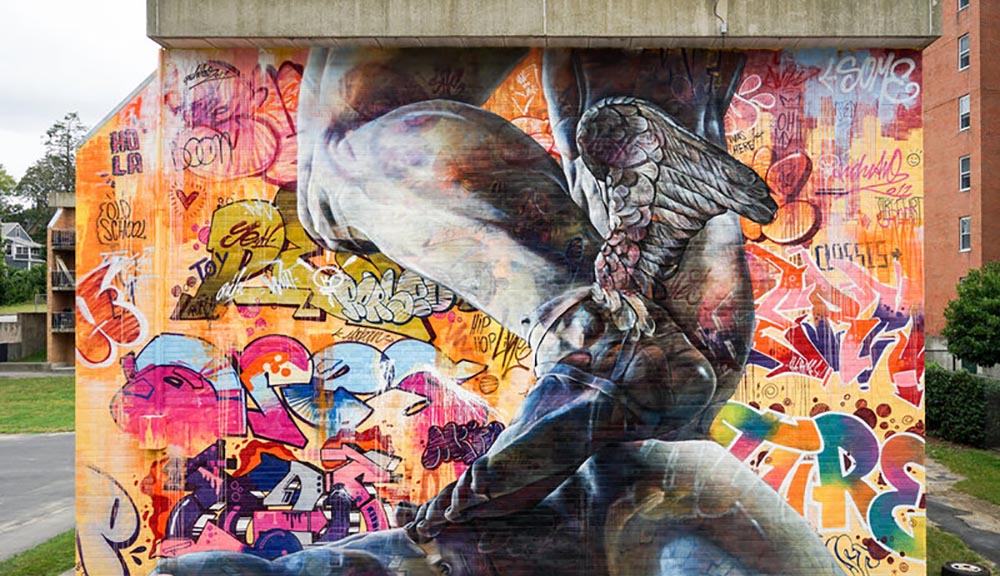 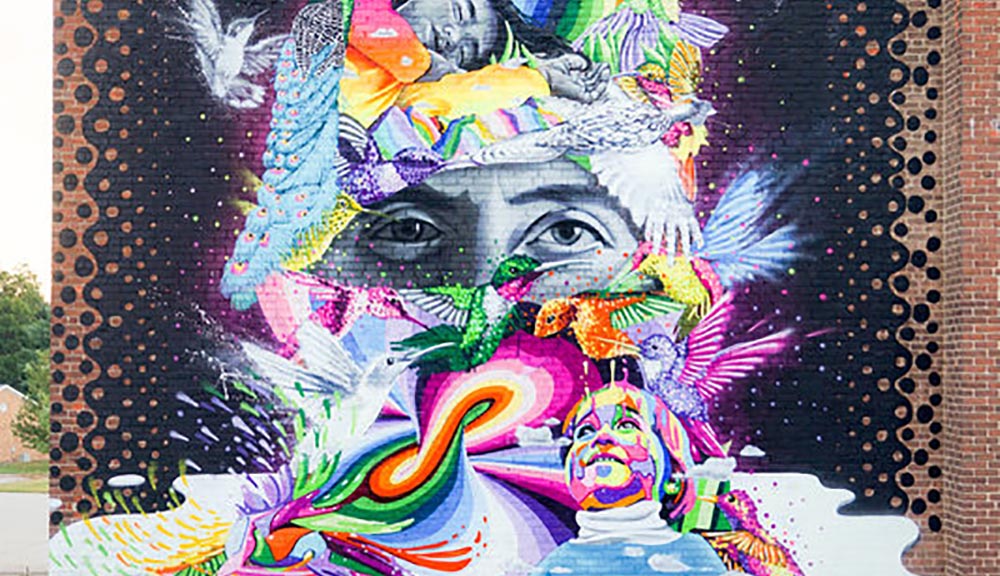 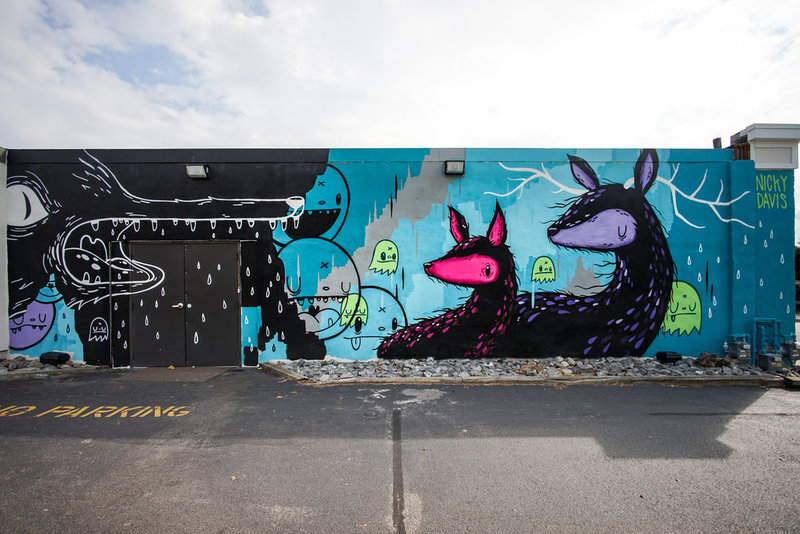 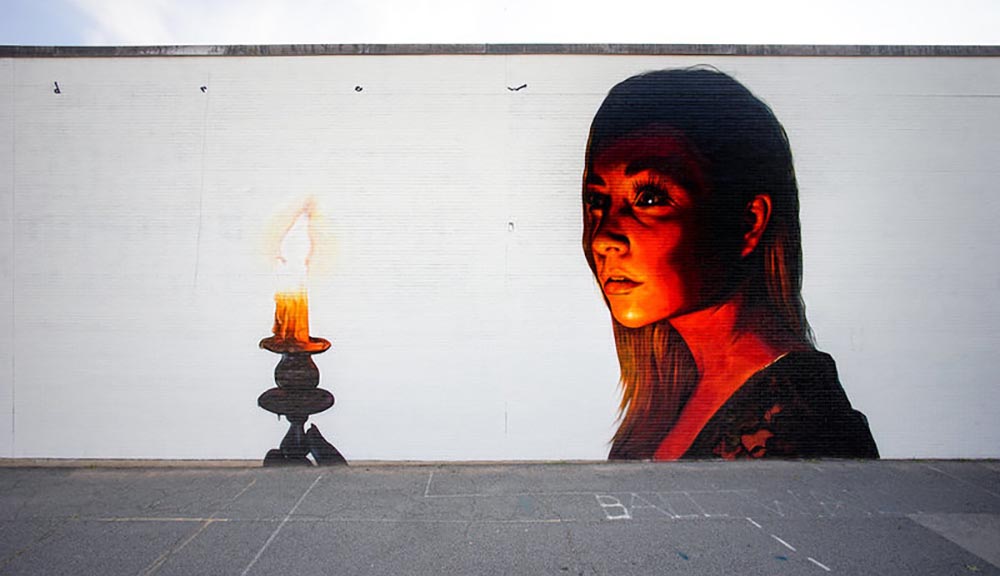 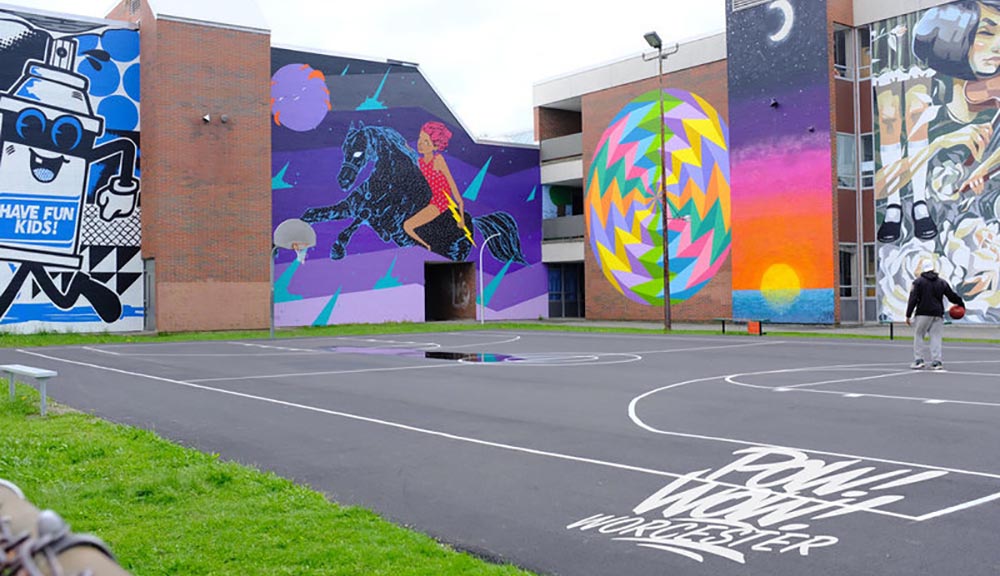 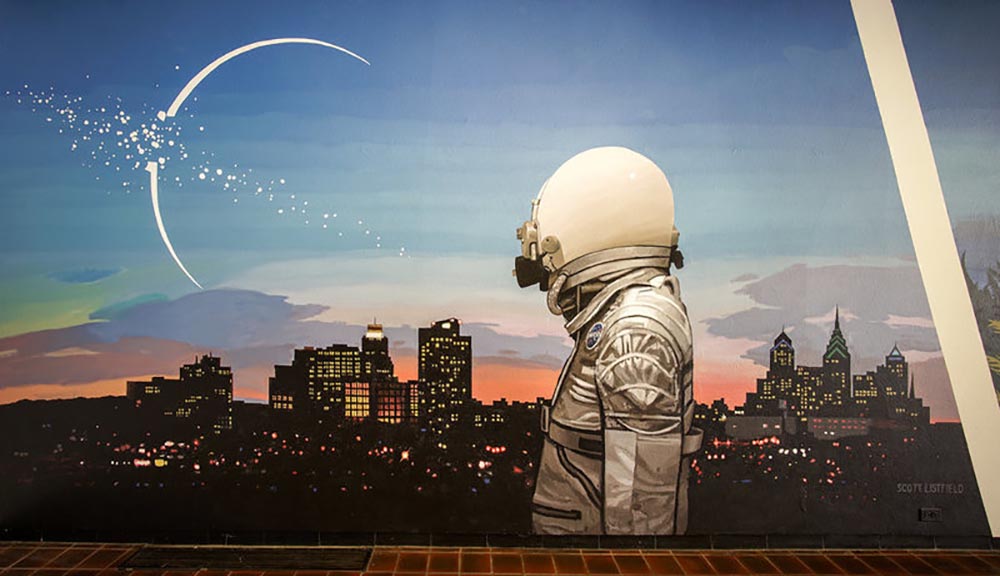 Kwatinetz worked all summer on the website project, gathering photos of the murals and the sites, researching the history of Worcester, using city directories, deeds, and fire insurance maps, exploring the work of the mural artists.  She wrote copy for the site and uploaded pictures and information.

“Obviously it helped with research and writing,” she says, assessing the benefits she gained through her work on the POW! WOW! Project. “But it also put me in the mindset of trying to create a product that is one of the goals of an engineer.  You usually have an end product and it has to appeal to the people who will be using it.”

Goldstein worked for two weeks on the project just before and just after the academic year started, proofreading and uploading content to the site as the project’s “last-minute crunch-time person.” She says the work helped her further appreciate working in a group with a tight deadline to “create solid output” for a broader audience than the usual academic assignment.

Both students also say the project deepened their knowledge and appreciation of Worcester.

“I’m not from around here, and while I’ve seen parts of Worcester, I haven’t truly explored all of Worcester and Massachusetts,” Goldstein explains. “So just reading about the history of Worcester as I proofread has been really interesting and I find myself going to look up different pieces that I read about and find more information after I read them.”

Kwatinetz adds that the project taught her lessons about how cities evolve and why it’s important for people—like civil engineers—who are trying to solve city problems, to listen to people in the community.

Viewing History in a Broader Light

Cullon sees an additional added benefit to the project: it was as an opportunity for Kwatinetz and Goldstein to view history and progress in a broader light and to work toward communicating to broader audiences.

“We need to think as much about how students need to effectively communicate with their publics as how well they craft a five-page analytical essay,” he says. “They learned how to tell the story of the city and it also had them consider the way in which what happens in the moment—the things they’ll create or the changes they’ll bring to cities—eventually are part of longer moments where previous creative agents, whether engineers or artists, had their sort of vision of what the future would be.”

He adds, “I think that’s valuable, because we’re humbled when we’re put it in the broader, longer projection of the past.”