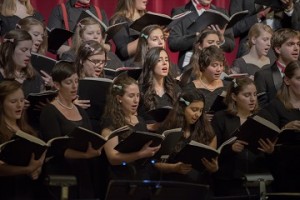 Chorus members from WPI and four other area
institutions will perform in the 35th annual
Holiday Pops at Mechanics Hall.

• It’s a seasonal favorite and has become a December tradition in Worcester. It’s the 35th annual Holiday Pops at Mechanics Hall, where choruses from five area colleges and universities—along with the Massachusetts Symphony Orchestra, soloists, dancers, and an aerialist,—take the stage this Saturday night.
As you can imagine, organizing such a presentation might be like herding cats, but given their expert direction, these musical cats will sing as one. WPI’s Instructor of Music, John Delorey, is the evening’s chorus master. “This is always an exciting challenge for me as we bring together over 200 singers who normally do not sing together, and in a very short time are able to produce a glorious sound.”

Choruses from Anna Maria College, Assumption College, Clark University, Worcester State University, and WPI will take part in the event. It’s the seventh year that Delorey has been at the helm and the 14th for his school. He says months of planning go into such a production. “Each summer we get together and poll who is interested, available, and willing to commit. We then decide on repertoire together so that we have appropriate material for our concerts on campus, as well.”

Who: Massachusetts Symphony Orchestra, with guest soloists and performers

This year the singers will offer a repertoire consisting of Early American music with “Redemption,” the sounds of baroque with “Judas Macabbeus,” holiday favorites with “Christmas on Broadway” and “Masters in this Hall,” and the modern classic “Gloria” by John Rutter. The concert also features music by Anderson, Handel, Strauss, and Tchaikovsky.

“These are all very well prepared and committed singers,” Delorey says. “We focus immediately on phrasing and articulation and tend not to worry as much about a unified sound. These are young singers with very different voices—I want their true voice to be part of this, not a forced sound.”

The Massachusetts Symphony Orchestra will be conducted by Alton Baggett. When asked how a chorus master and a symphony conductor coordinate the two ensembles, Delorey laughs and says, “We split the decisions. He is in charge of the sing-alongs and I do the choral portion. So there is no arguing.”

Witnessing this sea of humanity in a single setting is always impressive. Delorey says, “I think that the audience is always thrilled to see so many young people on stage with such commitment, talent, and energy. It is very uplifting and offers a sense of hope for even the most jaded of folks.”

There are two soloists for the concert, Jane Shivick and Richard Monroe, consummate performers with huge followings in this city. Commenting on her conductor and chorus master, Shivick says, “Both Mr. Delorey and Maestro Baggett bring their own personal touches to the performance. Mr. Delorey is an excellent choral conductor who connects well with the choruses and raises the bar each year with his choices of repertoire. Maestro Baggett makes sure everyone is comfortable with their music, whether ensemble or solo pieces.” 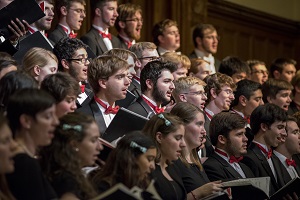 ​Shivick has been involved in this event for seven years. She is a soprano who will be singing “My Heart Will Go On,” the theme song from the movie, Titanic, and a duet with tenor Monroe, titled “Con te partirò” (Time to Say Goodbye), made famous by Andrea Bocelli and Sarah Brightman.

Shivick says this concert has a special place in her heart. “It is always an honor to share this special night each year with people from my hometown. I love looking out into the audience, seated on both the floor and in the balconies, and seeing so many familiar faces. Everyone is in such good spirits. It makes our job as performers so much more fun at such a magical time of year.”

Added attractions for the show include aerial performer Gina DeFreitas, who returns to the Mechanics Hall stage after her successful debut last year. The Project Movement Dancers are also scheduled, as is a very special visit by Santa Claus.