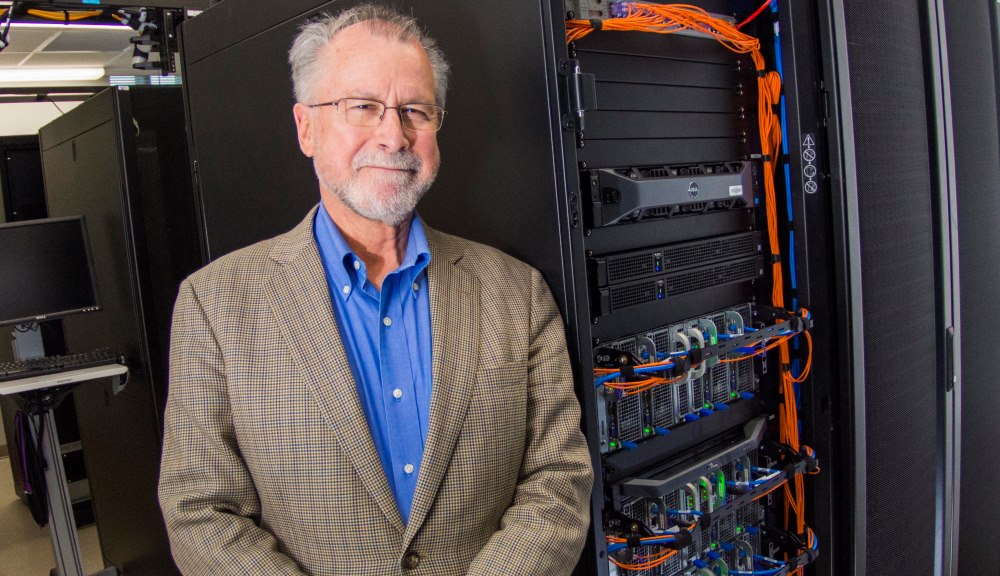 Walker stands before the high-performance computing system acquired with a 2013 National Science Foundation award for which he was principal investigator. The system has since become the foundation for WPI’s growing scientific computing capabilities.

An internationally recognized applied mathematician, he is honored for his work on nonlinear systems and optimization and their applications in scientific computation

Homer F. Walker, professor of mathematical sciences at Worcester Polytechnic Institute (WPI), has been elected a fellow of the Society for Industrial and Applied Mathematics (SIAM), an international organization that fosters the development of the applied mathematics and computational methodologies used in a variety of areas, including science and engineering.

Walker is an internationally recognized leader in the numerical solution of very large systems of linear and nonlinear equations. His methods and computational tools—developed with nearly $7 million in support from several federal agencies and departments, including the National Science Foundation (NSF) and the U.S. Department of Energy, and in cooperation with major national laboratories—are widely used by scientists and engineers. SIAM is recognizing him for “contributions to theory and software of iterative methods for nonlinear systems and optimization, as well as application of these methods to scientific simulations.”

He will be one of 28 new fellows honored at the SIAM annual meeting in Portland, Ore., in July.

“Professor Walker’s manifold contributions to computational and applied mathematics have created a lasting impact,” said WPI Provost Bruce Bursten. “We are proud of his selection as an elected fellow of SIAM, and we are honored to have him as part of our WPI family.”

Framed broadly, Walker’s area of expertise is known as computational mathematics, which the NSF defines as “mathematical research in areas of science where computation plays a central and essential role, emphasizing analysis, development, and implementation of numerical methods and algorithms, and symbolic methods.” His work includes the development of numerical methods for unconstrained optimization, differential equations, and statistical estimation, as well as linear and nonlinear systems.

Some of his most significant contributions are related to the Generalized Minimal Residual (GMRES) method, which is among the most widely used methods for solving large linear systems. In other significant work, he collaborated with S. C. Eisenstat at Yale University in developing some of the influential solution strategies for large-scale systems of nonlinear partial differential equations, and he collaborated with J. E. Dennis, formerly of Rice University, in analyzing widely used methods for unconstrained optimization.

His more recent work has focused on applying these methods to very large systems that arise when modeling complex physical phenomena, like fluid flow. This work has brought him into close collaboration with researchers at Lawrence Livermore and Sandia National Laboratories, where he has held visiting research and consulting positions several times over the years.

Aspects of the Eisenstat-Walker methods have been implemented in important codes developed at Lawrence Livermore, Sandia, and Argonne National Laboratories, codes that have been used by computational scientists and engineers around the world. For example, a long-term collaboration with Sandia contributes to the NOX (Nonlinear Object-Oriented Solutions) software package, which the laboratory has applied to complex problems in such areas as chemically reacting flow, semiconductor device simulations, and magneto-hydrodynamics. A scientist at Sandia said the package “is critical to our infrastructure and is also positioned to become one of the premier numerical solution libraries in this important area.”

Walker’s research, which has produced nearly 60 peer-reviewed articles and over 31 unpublished reports, earned him WPI’s Board of Trustees’ Award for Outstanding Research and Creative Scholarship in 2005. He earlier received the College of Science Researcher of the Year Award at Utah State University and the first Governor’s Medal for Science and Technology in Utah. He was named an ISI Highly Cited Researcher in Mathematics in 2003. A member of SIAM and the American Mathematical Society, he has held visiting faculty positions at Brown, Cornell, Rice, and Yale Universities, as well as the Universities of Denver, Houston, and New Mexico, and has delivered over 120 invited talks and presentations around the country and in Australia, Brazil, France, Germany, Japan, Korea, and Mexico.

Walker earned a BA in mathematics from Rice University and an MS and a PhD in mathematics from the Courant Institute of Mathematical Sciences at New York University. He began his academic career at Texas Tech University and held faculty appointments at the University of Houston and Utah State before joining WPI as professor and head of the Mathematical Sciences Department in 1997. He served as department head for five years. He also served as the manager of the applied mathematics’ program for the Office of Advanced Scientific Computing Research at the U.S. Department of Energy Office of Science in 2007-08 and was deputy director of the NSF-funded Institute for Computational and Experimental Research in Mathematics at Brown University from 2013 to 2017.