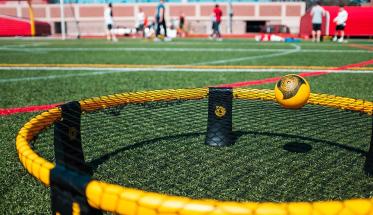 Everyone loves a good underdog story, and the establishment of WPI’s Spikeball Club is one for the books.

Usually played two versus two, with a net placed on the ground between the teams, spikeball can almost be considered volleyball’s distant cousin. One player serves the ball down onto the net so that it ricochets off toward an opposing team member, who has to bounce it back to the other players; this goes on, back and forth, until someone misses and the opposing team scores. To add to the challenge, there’s no out of bounds—players are welcome (even encouraged) to make it as difficult as possible for opposing teams to hit the ball back to them.

Spikeball aficionado Ryan Rigney ’18 first started playing the sport in high school, and after regularly traveling throughout the Northeast for tournaments, became a collegiate spikeball ambassador. As an ambassador, he’s part of a national committee that works to encourage interest in spikeball across college campuses.

So, when he arrived at WPI as a freshman and saw that there wasn’t already a spikeball club on campus, he decided to found one.

However, spikeball had yet to become a household name to the WPI community at the time, so his club application was rejected. Over the course of the next two years, Rigney worked to help develop a strong spikeball community on campus, and after meeting first-year students eager to start a club, reapplied.

And, well, the second time’s the charm.

“The spikeball community is built on friendship. Our hope was that we could use spikeball as a platform to bring people of all different skills and backgrounds together and provide them with a place to be active, meet new people, and improve their skills.” -Ryan Rigney

More than 30 students attended the Spikeball Club’s inaugural meeting, something Rigney is particularly proud of. “It was amazing to see everyone laughing and having fun,” he says. “After the rejection freshman year, and all the work we put into preparing to start a club, it was very rewarding to see the effort pay off.”

While it is an athletic club, one of the highlights of the experience is always the community. “The spikeball community is built on friendship,” Rigney explains. “Our hope was that we could use spikeball as a platform to bring people of all different skills and backgrounds together and provide them with a place to be active, meet new people, and improve their skills.”

Michael Capobianco ’20 and Karly Bigham ’20 were two of the first-year spikeball enthusiasts Rigney met, and now they serve as the club’s president and secretary.

“There’s lots of sportsmanship,” Bigham says of why she enjoys the sport so much. “Everyone is just playing to have fun.”

“[Through the club] I’ve made new friends, stayed active, and found a sport that I love,” Capobianco adds.

In addition to hosting regular campus-wide events and matches, the Spikeball Club recently held a tournament to raise money for Habitat for Humanity. Its members are also in the process of learning the rules and regulations involved with hosting other colleges in hopes of holding a tournament open to all.

Students have the summer to brush up on their spikeball skills before the club reunites in the fall; they may email the club for information on future practices once everyone has returned to campus. 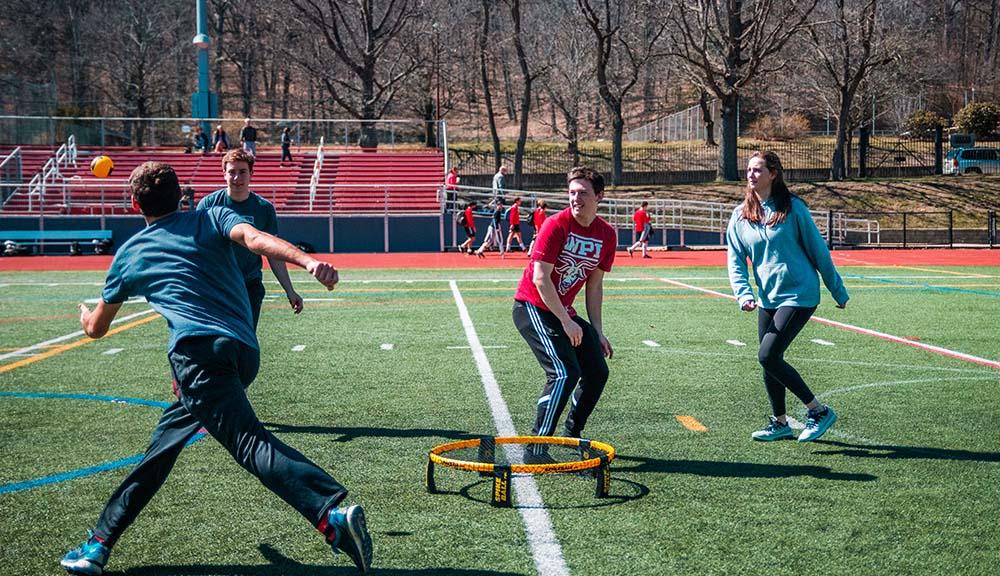 This is the ninth of the "WPI's Got What?" series, highlighting the variety of clubs and organizations at WPI. Check out other clubs that have been profiled: