Many of us can claim to want to change the world—but at just age 17, Amol Punjabi is already on his way there.

The Mass Academy senior has developed a software program that helps to determine whether disease-causing proteins are susceptible to drug treatment.

Named ViaPocket, it makes use of artificial intelligence, and with it Punjabi has discovered six “druggable” spots on intrinsically disordered proteins commonly involved in cancer and heart and immune system diseases. Typically, the instability of disordered proteins makes them a difficult target for drugs; that in mind, Punjabi sought a way to identify more stable pockets within those proteins where drugs could more easily bind.

“I showed that my program is more accurate than the best previous method,” said Punjabi, of Marlborough.

For his efforts, he was recently recognized as one of three top winners at the 75th annual Intel Science Talent Search in Washington, D.C. Considered the country’s most prestigious science and math competition for pre-college students, it is organized by the nonprofit Society for Science and the Public. Forty finalists from 38 schools in 18 states participated in the event, which featured astrophysicist Neil DeGrasse Tyson as keynote speaker. 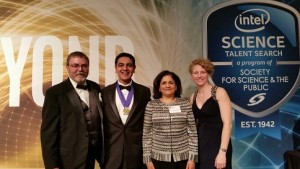 The trio of winners is “using science and technology to help address the problems they see in the world, and will be at the forefront of creating the solutions we need for the future,” Maya Ajmera, president and CEO of Society for Science and the Public, said in a statement.

Mass Academy senior Yashaswini Makaram was also a finalist in the competition. The Marlborough 17-year-old received a $7,500 award for a project she has been working on for two years that applies biometrics to cell phone security.

Punjabi, for his part, began working on his software project while involved in the Research Science Institute summer program at Harvard Medical School. He has also authored papers on nanoparticles, and serves as captain of the Science Olympiad team at Mass Academy, and lead pianist of its jazz workshop. 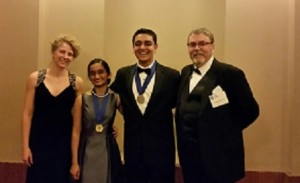 “I was shocked,”  he said of his win. After spending time with the other finalists, he noted, “I knew how brilliant and unique each one was, and I in no way expected to win an award.”

He plans to use the prize money for his education, he said. He has been accepted to Harvard University, MIT, and Stanford University, and is still deciding which one to attend, as well as what his major will ultimately be.

“I’m not sure yet—maybe math, computer science, chemistry, or something I’m yet to explore,” he said.

As for his future career? That’s also yet to be determined. However, he stressed that “I want to continue working in the biomedical field, helping find cures and treatments with my research.”