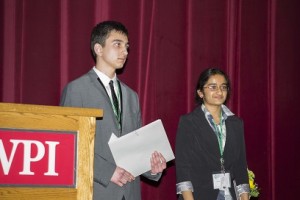 Identity theft is an all-too-common side effect of 21st century conveniences—according to the Bureau of Justice Statistics, 16.6 million people were victims in 2012 alone.

When it comes to our Smartphones, 17-year-old Yashaswini Makaram knew there had to be a better—and more convenient—method than simple password protection. So the analytically minded student at the Massachusetts Academy of Math and Science at WPI set about to experimenting.

The result is her project, “The Phoney Lift: Using Accelerometers to Identify People,” which placed No. 1 in the 60th annual Worcester Regional Science and Engineering Fair, held at WPI on March 13. Her ongoing endeavor makes use of accelerometers, gyroscopes, hundreds of measurements, and trigonometric computations, ultimately determining nine observations that define a person.

“I like the area that I’m working in right now,” Makaram said. “I want to do something closer to the edge, mixing the different fields of science.” 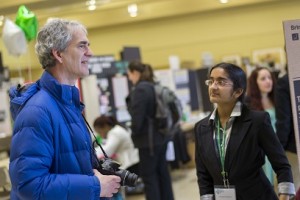 Makaram’s work was chosen from among 126 projects by 163 area high school students, with awards given out following a keynote by President Laurie Leshin. Now Makaram and five other top finishers will go on to the International Science and Engineering Fair in Pittsburgh in May. Forty-two other students were given honorable mentions, qualifying them as regional delegates to the Massachusetts State Science and Engineering Fair, to be held May 1 and 2 at the Massachusetts Institute of Technology.

In announcing the awards, Nancy G. Degon, retired educator and chair of the upcoming annual Worcester Regional Science and Engineering Fair, said the academy’s strong showing for the second straight year is a testimonial to the school systems that prepare students well enough for the rigors of  Mass Academy.

“Every year they seem to outdo themselves,” Mass Academy director Mike Barney said as the winning students mugged for photos on the Alden Hall stage nearby. They typically start brainstorming in August, he said—a full half-year ahead of time—and all their work is from scratch. “All this is original research. The students work so hard.”

The regional competition is open annually to students in 9th through 12th grades from numerous public, private, parochial, charter, and home schools in Central Massachusetts. The middle school division of the fair is to be held at WPI on May 5.

Projects were displayed all day Friday at the Odeum at the Campus Center; the hall was abuzz with conversation by budding scientists and engineers and their mentors, future instructors, and curious onlookers.

The works covered a wide swath of disciplines and topics—circadian rhythm disturbances on cricket neurodegeneration; affordable lower-limb prosthetics in developing countries; the effects of therapy dogs on human blood pressure; preventing concussions in contact sport collisions; light-following robots; electricity-generating backpacks; the benefits of volcanoes; electrolytes in drinks; and the spectrum of plant growth. 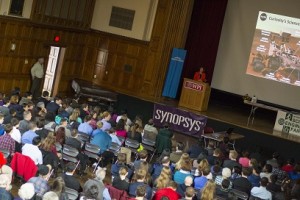 Serving as further inspiration for the great minds of tomorrow, President Leshin offered her keynote on her NASA work on the Mars rover Curiosity.

As she explained before the crowd of students, parents, and educators, the rover was designed to look for evidence that water once flowed on Mars. Its landing area was the 80-mile-wide Gale Crater, and it touched down at 10:30 p.m. on Aug. 5, 2012.

“I remember the date extremely well, because it happened to be my birthday,” Leshin said. “It was a pretty good birthday present.”

Still, she and her team only spent a few minutes celebrating, she said; the rest of that night and the ensuing months were dedicated to work on the rover, which is outfitted with numerous cameras, weather instrumentation, spectrometers, chemical sensors, and a drill, scoop, and laser that shoots tiny holes in rocks.

What it has since discovered among Mars’s canyons, enormous volcanoes, and “thousands and thousands of dried-up river beds,” is a rounded pebble conglomerate similar to one that indicates water on earth. It has also photographed elaborate textured layers on rocks, a geometric pattern that tells scientists there were once flowing currents there. The crater that served as its landing pad was probably once a lake, Leshin posited.

“Was there anything swimming in that lake? We don’t know yet,” she said, explaining that the robot’s next mission is to make a slow crawl up the nearby Mt. Sharp.

Kyle Foster, Wachusett Regional High School, “They Get Knocked Down, But They Get Up Again!”