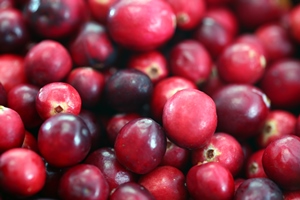 Illuminating traditional wisdom with chemistry and biophysics, a research team at Worcester Polytechnic Institute (WPI) and the University of Massachusetts Dartmouth has characterized the role of compounds in cranberry juice that block the critical first step in bacterial infections. The results open a potential new area of focus for antibiotic drug development.

The research team, led by Terri Camesano, PhD, professor of chemical engineering and dean of graduate studies at WPI, and Catherine Neto, PhD, professor and chair of chemistry and biochemistry at UMass Dartmouth, report their findings in the paper "Atomic force microscopy-guided fractionation reveals the influence of cranberry phytochemicals on adhesion of Escherichia coli" published in The Royal Society of Chemistry journal Food & Function.

"With the emergence of new superbugs that are resistant to current antibiotics, our hope is to better understand the mechanisms of bacterial infection so we can identify potential new antibiotic drug targets," Camesano said.

According to the U.S. Centers for Disease Control and Prevention (CDC) at least 2 million Americans are infected each year with drug-resistant bacteria, while some 23,000 die from those infections. To cause an infection, bacteria must first adhere to a host and accumulate in sufficient numbers to form a biofilm. In the new paper, the team reports that compounds in cranberry juice called flavonols greatly reduced the ability of the bacteria E.coli to stick to a surface (various strains of E. coli are responsible for many types of infections, including those of the urinary tract.)

Previous work by Camesano, Neto, and others has shown that a group of compounds called proanthocyanidins (PACs) likely play a role in cranberry juice's ability to block bacterial adhesion. In the new study, Neto’s team used advanced chemical techniques to separate or "fractionate" cranberry juice into its constituent chemical compounds and characterize them. Then at WPI, Camesano's team cultured E.coli cells in samples of the fractionated juice and used an atomic force microscope to measure the bacteria’s ability to bond to a surface. "This study is the first to combine an assay-guided fractionation approach with atomic force microscopy to identify cranberry juice constituents that most strongly influence E.coli adhesion forces," the authors wrote.

After the first round of testing, samples that showed the greatest ability to reduce E.coli adhesion were further fractionated at UMass Dartmouth and then returned to WPI for testing. The process went on in similar cycles, further reducing the number of compounds in each sample, to home in on the key chemicals affecting adhesion. Those tests found that flavonols significantly reduced E.coli adhesion, both on their own, and in the presence of PACs. One particular group called flavonol galactosides showed the strongest results. "Like the PACs, we think the flavonols are part of the plant's defense system," Neto said. "They are secondary metabolites that are produced in greater concentrations when the plant is under stress or in the presence of pathogens."

"This is an excellent collaboration that pairs what we do on the biophysical side at WPI with the work that UMass Dartmouth does on the biochemical side," Camesano said. Added Neto, "I think we have a great partnership with WPI because we come at the question from different angles and together we provide a nice picture of what’s going on."

The new data builds on previously published work, in which Camesano and her team showed that cranberry juice compresses the tiny tendrils (known as fimbriae) on the surface of the E. coli bacteria that enable it to bind tightly to the lining of the urinary tract. The change in shape greatly reduces the ability of the bacteria to stay put long enough to initiate an infection. Flavonols also are likely to affect the ability of fimbriae to bind to surfaces, but in a different way than PACs do, Camesano noted.

"This strongly suggests the anti-adhesive role of other classes of cranberry compounds in conjunction with already known PACs and may have implications for development of alternative antibacterial treatments," the authors wrote. "These compounds should be further explored, both individually and in combination for their antimicrobial properties against various bacterial diseases [to] give us a therapeutic edge against these 'superbugs.'"

For more information about ‘superbugs’ that are resistant to current antibiotic treatments, see the CDC resource page here.