King of the Nerds 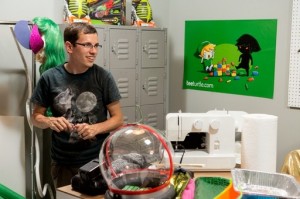 Student Activities will host a replay of a
Season 3 “King of the Nerds” episode on
Tuesday, Feb. 10, from 2 to 3 p.m., as well as a
Google Hangout with contestant and WPI alum
Jonathan Adler from 3 to 4 p.m., in the Rubin
Campus Center’s Hagglund Room.

Just in time for WPI’s 2nd Annual Geek Week, the school celebrates an alum who competed on TBS’ “King of the Nerds” this season.

Tomorrow WPI hosts a replay screening of one of his episodes, and a Google Hangout with Jonathan Adler, one of the competitors. On the reality show, 12 housemates compete in various STEM-related challenges to determine who is — you guessed it — King of the Nerds.

Adler earned bachelor’s and master’s degrees at WPI, both in mathematics, graduating from the master’s program in 2009. A Rhode Islander now living in Arizona, he went on to get a Ph.D. in industrial engineering at Arizona State University. He now works as an advanced analytics consultant.

Adler had sent his video to TBS last season to be considered for the show, and never heard back. When the casting call for Season 3 began, TBS called and urged him to send another.

“Apparently I was very close the first time,” he says. They asked him to send a video by that Monday. “I almost didn’t do it. But I threw together a video and got on,” he says. He was invited to Los Angeles for an interview last summer. Once accepted, he says, contestants are transported directly to the house, where they are filmed almost constantly for a few weeks in July. He had to be ready to begin.

But taking an unknown number of weeks off from work to compete in a reality show is a potentially awkward request with a manager. “He laughed,” Adler said. Luckily the team was between projects, and Adler says his supervisor said, “Obviously, you have to do it.”

During Season 3, one challenge was for the housemates to build Rube Goldberg machines. In another contest, competitors try to steer remote-controlled golf carts to push exercise balls across a course, and hit marked goals.

Adler says his WPI education — and specifically MQP projects — were invaluable while on the show.

“They give you a pile of parts and you have to decide what to do with it. There’s no teacher telling you exactly what to do,” he says. “It was amazing how there weren’t many people in the challenge able to do that.”

Living in the house was another memorable experience, says Adler. No Internet, cell phones or technology are allowed. One of his cast mates, as it worked out, lives 20 minutes away from him in Arizona. He says the show was a bonding experience and he still keeps in touch with many of his fellow “nerds.”

As for the almost-always-present filming?

“It’s funny how quickly you get used to cameras following you,” he says. “You actually become more conscious of playing the game.”

Student Activities will host a replay of a Season 3 “King of the Nerds” episode Tuesday  from 2 to 3 p.m., followed by a Google Hangout with Adler from 3 to 4 p.m., in the Rubin Campus Center’s Hagglund Room. Associate director of student activities Christine Girouard says all are welcome to bring their questions about Adler, reality shows, or both.

“I’m interested in the similarities and differences between living in the house on the show and living here on campus,” she says.

Does Adler win the ultimate nerd title and $100,000 cash prize? He knows, but we don’t. For now, Adler’s clear on why he finds the show beneficial to nerds everywhere. “The show doesn’t go for drama; it’s all about how you compete.” Also, like “The Big Bang Theory,” Adler says, “They celebrate the nerdiness.”