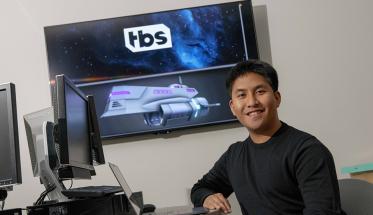 Ready for His (Animated) Close-Up

You know that feeling when you’re watching an animated show and you recognize a character’s voice, but you can’t put your finger on where exactly you recognize it from? Yeah, we know it’s frustrating, and we hate to be the bearer of bad news, but you’ll probably have that exact experience during the second season of TBS’s new animated series, Final Space.

However, this voice won’t sound familiar from a past episode of The Simpsons or Bob’s Burgers—instead, you might have heard it in passing at the Rubin Campus Center, in one of your classes, or outside on the Quad.

This voice belongs to computer science major Joshua Galang ’19, who, thanks to his affinity for space, animation, and any combination of the two, will be flying out to Hollywood so he can meet the Final Space cast and crew, help design a new character (which he’ll voice), and be drawn into an episode of the show’s upcoming season.

“My roommates had to come check up on me since I’d made an inhuman noise,” he jokes, referring to his reaction upon learning that he’d won the contest.

Thanks to a long-held interest in space and science fiction, starting with Star Wars as well as writing a children’s book about stars and planets when he was 12, Galang was intrigued by Final Space after seeing a recommendation for it on YouTube.

“I was drawn to the dramatic storytelling and cinematic visuals,” he says. “It’s a beautiful show.”

A Match Made in Space

It didn’t take long for Galang to become a fan, and when a contest was announced at San Diego Comic-Con, it only made sense for him to enter. The contest rules were simple: create a short video promoting Final Space using the show’s Augmented Reality application. Galang took this concept one step further, explaining that he combined the app with his own 2D graphics and 3D models over the course of several weeks, transforming his apartment into a brand new Final Space locale.

“I’d definitely consider a career in computer graphics and animation. It blends both my computer science major and art into one.” -Joshua Galang

As a computer science major, Galang’s passion and talent for animation might come as a surprise to some, but remember that children’s book he wrote when he was 12? As part of his humanities and arts seminar, he was able to take a variety of animation, vector work, and graphic design courses to begin the process of translating it over to a digital format. He credits these, as well as courses in 2D and 3D animation with professors Ed Gutierrez and Ralph Sutter, as introductions to the principles and techniques he used in his video.

And they definitely paid off—Galang’s entry was deemed the winner by several judges, including the show’s creator himself, Olan Rogers.

With graduation coming up in the spring, it’s only natural that Galang would be weighing his options about future careers—and in true WPI fashion, he might be heading somewhere he hadn’t expected when he first crossed Earle Bridge during New Student Orientation.

“I’d definitely consider a career in computer graphics and animation,” he says. “It blends both my computer science major and art into one.”

It’s only a matter of time until Galang leaves for Hollywood, and the number one way he’d describe himself? "Excited!"

“I can’t wait to meet the cast and crew of the show,” he says. “I’m also very excited about the opportunity to see the inner workings of a major animation studio and see what I’ll look like in animated form.”

There’s no official word yet on when the second season of Final Space will premiere, but we’ll be sure to update the WPI community as to when Galang will be making his silver screen debut.