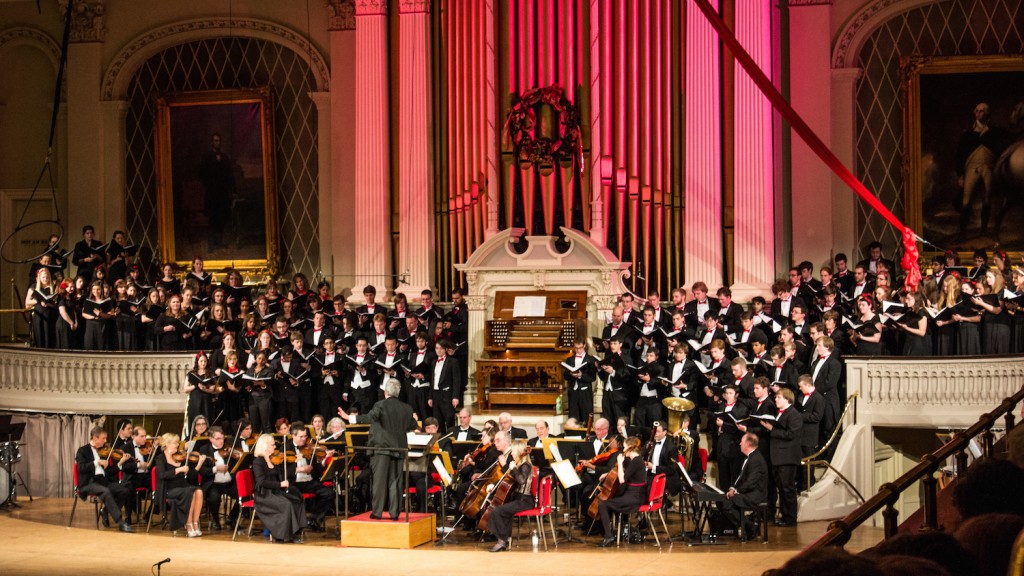 The WPI Choral Music Association is always looking to gather a crowd in terms of a willing audience looking for vocal entertainment.

Now — with a 10-day singing tour planned in May — the group looks to rustle up some crowdfunding via Indiegogo to help pay for 38 undergrads and five alumni to travel to London and perform in some of the area’s most prestigious venues. The trip’s fundraising goal of $5,000 is running in tandem with a larger fundraising effort, says assistant conductor Joshua Croke ’14, of $50,000 to fund the association’s future needs, of which 25 percent has already been contributed.

Through music director John Delorey’s relationship with arts groups via the London Project Center, the choral group will perform in places like St. Paul’s Cathedral, the mother church of the Diocese of London; St. Martin-in-the-Fields in Trafalgar Square; and the Old Royal Naval Chapel in Greenwich.

“We will also be producing an on-site recording of our choral repertoire,” says senior Sylvia Parol, executive manager of the tour. “Our director, John Delorey, has worked diligently … organizing … opportunities that are not usually available to foreign choirs.”

Why is the trip so important? Croke says Delorey explains it best. “He says our chorus is made up of so many students who wouldn’t be able to afford to go [otherwise]. Students are impassioned to raise funds for each other,” says Croke. “It’s inspiring to see.”

The trip also comes at a momentous time in the WPI history — the 140thanniversary of choral music at the school. Croke says the glee club began at WPI in 1874 with nine male members. Now, he says, there is an all-female choir, a festival choir, a men’s choir, and five a cappella groups.

“In celebration, we want to be able to allow students to go on tour, regardless of financial hardship,” he says.

The $5,000 will help defray airfare, lodging, and food costs for students. To help encourage contributions, the association is offering exclusive CDs, choral gift baskets, and personalized video messages for various levels of giving, according to the Indiegogo page. As of late day March 6, $829 was raised. The Indiegogo effort, a strategic method of fundraising due to the time crunch, will end March 31, Croke says.

Croke credits Peter Thomas, executive director of alumni relations and annual giving, with helping with strategy and with a December call-to-action mailing to those who have been part of the choral program at WPI. The hope, he says, is that students’ families, alumni who have participated in the WPI choral program, and the general public will come forward to support the trip.

Reaching beyond campus and into the community-at-large, a benefit, Staccato: Accenting the Arts in Worcester, is planned for the evening of March 29 in Alden Hall, featuring performances, an auction, and wine and food pairings. It’s an opportunity for the city’s arts community to support the London tour, along with WPI students, families, and alumni.

Part of the overall fundraising effort, says Croke, is making the public aware of WPI’s extensive music program, through social media and other methods. “Many people don’t know [we have such a strong choral program] and we are always growing,” he said. “It’s a unique program, as we allow access to all students — not just music majors.”

To contribute to the choral association’s London tour fundraising effort, visit HERE. Or email the group at Londontourmanagers@wpi.edu.