A popular book title posits that men are from Mars, and women from Venus, but for more than a decade women have held key roles in the exploration of Mars. And with NASA’s Curiosity Mars rover having marked its first Martian year on the red planet (687 Earth days), NASA has been recognizing the contributions of the many women involved in the mission.

That recognition continued on July 29 at WPI’s Camp Reach, when seventh-grade girls met with WPI President Laurie Leshin, and spoke with other women who continue to play important roles in NASA’s exploration of Mars, and in space exploration overall. During a presentation and question-and-answer session with the campers, Leshin described the Curiosity rover and the complexities faced by it and its controllers back on Earth. Leshin, a geochemist and space scientist, has been involved in the Curiosity project since its inception more than a decade ago, and she remains a team member today.

In August 2012, after a nine-month voyage, Curiosity landed in Mars’  Gale Crater, where it has been analyzing soil and rocks, and looking for organic molecules. Controlling the rover is not done in real time, as it takes eight minutes for commands – traveling at the speed of light – to reach Mars, Leshin said. “We can’t talk to Curiosity the same way we could talk to something autonomous working here on Earth, where we could interact with it directly,” she told the girls. “We only talk to Curiosity twice a day.”

We have a lot more exploring to do.
Laurie Leshin
WPI President

The Curiosity team sends commands in the morning, and in the eveningCuriosity sends data back on photographs, samples taken and their analyses. Then the scientists analyze the data and plan the rover’s activities for the next day. Because there is rough terrain, Curiosity, equipped with cameras and sensors, uses artificial intelligence to make decisions and decide the best route to travel, she said.

Curiosity was designed to live one Mars year, but its nuclear power plant and other systems could live for another decade. “That’s good, because we have a lot more exploring to do,” she said.

Following the Q&A, Leshin and the girls held a video conference with five women at NASA’s Jet Propulsion Laboratory in Pasadena, Calif., all of whom have a role in Curiosity’s operation. They answered questions about their individual jobs on the Curiosityteam, and how important the team effort is to the success of the mission.

“It’s a team exercise. We achieve as a group of people,” said one. “Being an engineer, you can work alone, but you also work as part of a team, and that’s a rewarding part of being an engineer.” 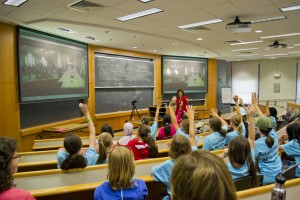 The NASA women pointed out that work is now ongoing for Curiosity’s successor, which has not been given a formal name, but is referred to as “2020.” That rover will have some similarities to Curiosity, but new sampling system that will take core samples for later return to earth. It is hoped that samples eventually returned to Earth for analysis will help determine if there was past life on Mars.

Prior to serving as WPI’s 16th president, Leshin spent six years as a senior leader at NASA. She joined the agency in 2005 as director of science and exploration at NASA’s Goddard Space Flight Center. In 2008 she was promoted to deputy center director for science and technology at NASA Goddard. In 2010 Leshin was tapped to join NASA’s Exploration Systems Mission Directorate in Washington, D.C., the organization responsible for future NASA human spaceflight activities.