The 48 campers enrolled in this year’s ExxonMobil Bernard Harris Summer Science Camp got an eye-opening look at the surface of Mars and the Curiosity rover that has been exploring the red planet since August 2012 during a presentation by WPI president Laurie Leshin, who worked on Curiosity during her career with NASA.

The visit from Leshin came a day before the campers were to design and build their own scale versions of a Mars lander during the camp’s Media Day activities.

Leshin, who took the helm as WPI president in June, had previously spent six years as a senior leader at NASA, and was involved in work on Curiosity, which began more than 10 years ago. 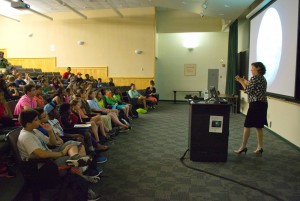 Curiosity landed in Mars’ Gale Crater, where it is analyzing soil and rocks, and looking for organic molecules, Leshin explained during a slide presentation showing the Martian terrain and the Curiosity rover.

“It took many years to design, build, and send Curiosity to Mars,” she said. “Mars is my favorite planet, beside Earth. I’m a geologist, and Mars is a great place to study geology.” She pointed out that Mars shares some similarities with Earth in that it has a tilted axis, resulting in four seasons, with polar ice caps that shrink and expand with the seasons. Compared to Earth, which has an atmosphere of mostly nitrogen and oxygen, Mars has a thin atmosphere comprising mostly carbon dioxide.

But the planet’s geologic history is a mystery, she said, using a projected photo of the planet to explain some of its features. “It has enormous volcanoes. If you look, one of those volcanoes in the photo is as large as Massachusetts,” she said. “The canyon across the center would stretch from Boston to Los Angeles.”

Mars has topographic features that were carved by liquid water, and thousands of dried up river beds, Leshin said. “There used to be a lot of water there. Where did it go? If there was so much water, could there have been things swimming around in it?”

Leshin showed a strikingly beautiful photograph of Mount Sharp, with its stratified layers of rock, saying that it will take months for Curiosity to methodically make its way up the slope while it takes photographs, and gathers and analyzes samples along the way.

ONBOARD SENSORS AND HIGH TECH LAB

Careful consideration went into selecting the landing zone for the nuclear-powered Curiosity, which she described as being the size of a large golf cart or Mini Cooper automobile, with onboard sensors to record images and navigate, and to analyze rocks and soil. A high-tech lab inside the belly of the rover also provides more precise on-the-spot analysis of samples. The selection of the 80-mile-wide Gale Crater afforded the opportunity to explore an area that likely was a lake bed, but with a volcano and varied terrain nearby. The selection of a low-lying landing zone was important, she said, as the added atmosphere on the way down would give a little extra time for the parachute and retro rockets to slow the rover down prior to impact.

Having a nuclear power plant on board makes it possible to operate Curiosity year round while keeping it warm, she said, pointing out that temperature variations are much more extreme than on Earth.

NOT YET READY FOR MANNED MISSION TO MARS

Leshin held a 30-minute question-and-answer session with the campers, who had some sharp observations of their own. Although Curiosity is expected to operate for several years, NASA is not yet ready for a manned mission to Mars, she explained in response to a question. A lander suitable to hold astronauts would be about 10 times larger than Curiosity, she pointed out. 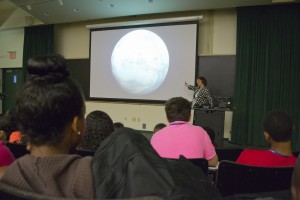 “It’s a real challenge, and that’s why we haven’t gone yet,” she said.

Mars, with its wider orbit around the sun, takes approximately two Earth years to complete one of its own. Mars is about half the size of Earth, but with no oceans covering its surface, the land surface is roughly equal to that of Earth, Leshin explained.

Curiosity is not driven remotely by someone on Earth, because the vast distance takes eight minutes for a command – traveling at the speed of light – to reach the rover. The flight to Mars itself took nine months. Its commands are sent at the beginning of the day, and the rover completes them as well as it can, stopping to notify NASA controllers if it runs into a problem that could jeopardize it or the mission, she said.