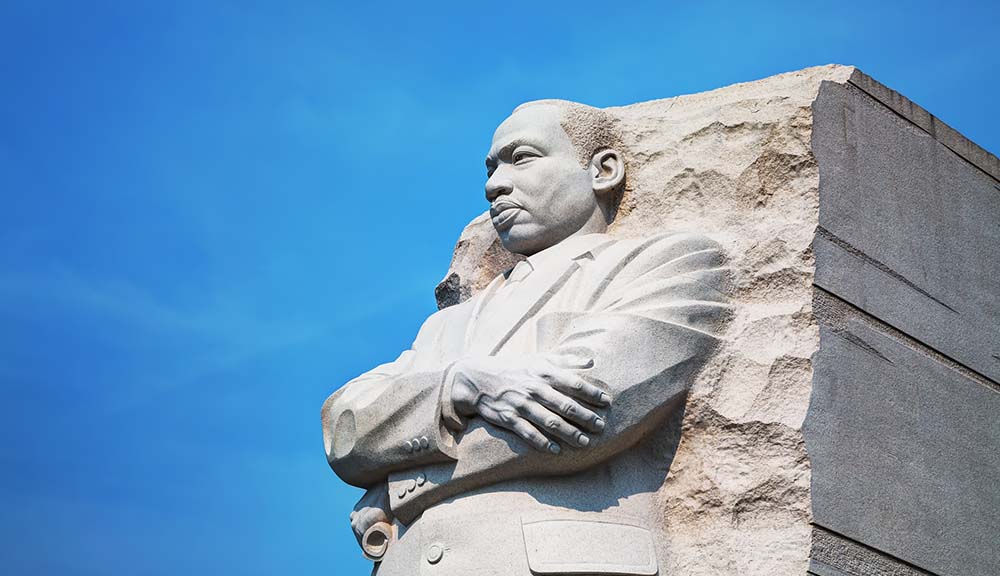 On January 16 WPI hosts the inaugural Reverend Dr. Martin Luther King Jr. Commemorative Address, a campus-wide event that offers the community a chance to reflect on how King’s activism was not confined to race, but in fact spread deep into other areas of social justice.

The evening features award-winning documentary filmmaker and lecturer Yoruba Richen and offers discussion about her perspective on how King’s civil rights activism helped pave the way for the gay rights movement.

The topic has been a cornerstone in Richen’s own research. Her 2013 film, The New Black, explored the struggles for LGBTQIA+ rights and the ripple effect that King’s work and messages of peace had on social justice movements.

Considering Perspectives as a Community

“There have been other WPI events around MLK in the past, but many were student centered,” says Bonnie Walker, executive director of diversity and inclusion (D&I) strategy. Now with an expanded D&I focus, there are more resources to support what will become an annual community event that blends with other MLK celebrations taking place throughout Worcester.

“This event to commemorate Dr. King’s legacy is an affirmation of what WPI stands for,” says WPI President Laurie Leshin. “As a thoughtful and caring university community, reflecting on the impact of this legendary figure reminds each of us how our personal and professional actions can change the world. With WPI’s history of global project work, this event helps us reflect on how we all carry a responsibility to make the world better.”

“I think his vision continually resonates,” says Richen. “MLK is someone to study and understand as your own understanding about justice and social change deepens and evolves. His optimistic but realistic outlook is inspiring and sobering. And his belief in social justice through an intersectional lens is something that informs my understanding and vision for social change.”

The event has been a long time in the making. When the team initially formed more than a year ago, each member brought with her individual perspectives on how MLK Day shaped her life and how a campus-wide event could have the greatest impact.

“...his leadership left a legacy for the future. It is a reminder that we all have the capacity to be great leaders.” -Michelle Jones-Johnson

Jones-Johnson says that noting the impact of such an influential leader is especially meaningful. “In studying and learning about Dr. King, we have been able to gain insights into his character and as a person,” she says. “He has complexities as a man, but his leadership left a legacy for the future. It is a reminder that we all have the capacity to be great leaders.”

With Richen as a speaker, WPI is offering a new perspective that expands beyond King’s legacy from the issues of race that typically surround his message. “We are bringing different voices to the table and that’s what we are all about,” says Jones-Johnson.

Reflecting on Social Justice at WPI

Walker says commemorating King’s legacy continues as a thread in WPI’s larger theme of social justice. “Social justice is tied to project work,” she says. “It’s not just about learning how to be a great engineer but how to make a difference in the world.” As WPI continues to expand its social justice programs, King’s legacy holds an appropriate spot. And, as Jones-Johnson says, King also had fortitude, a characteristic way of approaching challenges that anyone can reflect on in their own lives.

And as much as King is known for the struggle around civil rights, he is also memorialized for the celebrations of his work. Growing up as the daughter of one of the first few faculty members of color at Dartmouth College in Hanover, N.H., Walker says her home state was the last to adopt MLK Day as a holiday (President Ronald Reagan signed the holiday into law in 1983. It was first observed in most states in 1986, but New Hampshire did not adopt the holiday until 1999.). Even so, her parents rejoiced in the day.

“As chair of the Dartmouth Black Caucus, my dad convinced his caucus colleagues that they should initiate a special program to honor MLK,” says Walker, noting the effort was a success and eventually became the annual MLK event at Dartmouth.

As a child in Pittsburgh, Jemison remembers MLK Day as one of joy—the week was filled with events and programs. “It was not a day off for me,” she says. “It was a day of celebration. It gave me a sense of pride.” She became instrumental in spearheading MLK events at her college.

“I am excited about the intellectual piece of this, too,” says Hayles. “There are different parts to and different interpretations of his legacy. I like that.”

Richen hopes listeners will think of King’s message in relation to current times. “I think it’s important to remember that progress often comes with backlash, but still we move forward and try to make change,” she says. “And we do—even if it’s incremental. It may be cliché, but I think hope and faith is what carries us through—that and a willingness to stand up and fight for what you believe in.”

The Martin Luther King Commemorative Address takes place on Wednesday, January 16, from 6 to 7 pm in Alden Hall. Doors open at 5:15. Pre-registration is requested.