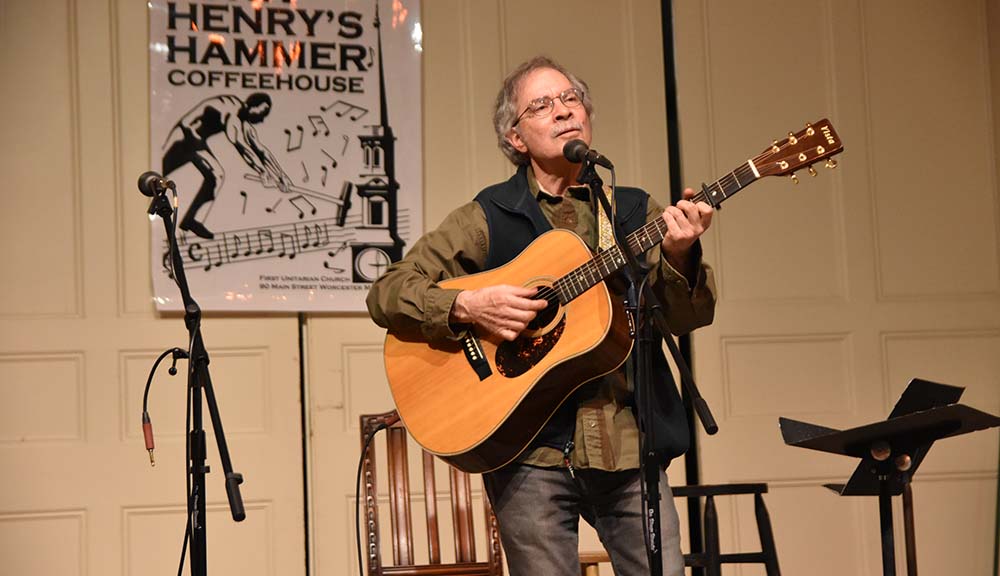 Beyond the Classroom: Rick Quimby, Professor and Musician

It’s a given that associate professor of physics Rick Quimby would be comfortable at the front of a lecture hall or in a lab, but it might come as a surprise to learn that he’s just as at home behind the piano, soundboard, guitar, microphone, or ... well, you get the idea. He recently sat down with The Daily Herd to discuss musical influences, coffeehouse concerts, and collaborations with his writing and performing partner Linda McCarthy in their duo, Owengale.

And that’s music to our ears.

I've been interested in music since I was eight or nine years old. I started playing cornet in the middle school band, so I got introduced to the basics of reading music very early. I really enjoyed it. I took piano lessons when I was around 10 or 11. At some point, probably two years after I started, I learned to figure out chords on my own. I listened to Beatles songs on the radio. And once I learned to do that, I was figuring out the chords to the songs. It just came naturally.

I had a band in high school—we called it The New Rock Brass. We filled the living room with our music. I wrote out all of the musical notation and scores for everybody.

When I was an undergrad at Clarkson College, I was exposed to some folk musicians for the first time. They came to the coffeehouse on campus and they were just playing guitar and singing these ballads, and I thought, “This is really good music!” I wanted to learn more about that. Some friends had introduced me to people like Cat Stevens, and all the ’60s and ’70s folk singers. I learned to sing all those songs and perform with other people at college.

I was a DJ in the 1980s and ’90s on WICN-FM (in Worcester) on a radio show called Open Hoot! I learned a lot about folk music by playing folk albums on that show. In addition to playing albums, I made recordings of the concerts at John Henry's Hammer and I would play them on my show. In fact, I called that segment “The Coffeehouse Connection.”

I've been focused on electronics and physics since I got into school and music stayed as a hobby. It's never been a vocation, it's always been an avocation. But it's a serious avocation. I like electrical engineering, and I like technology, and I like sound systems. I am recording not only myself and Owengale, but other musicians  ... to help them get their music out.

Quimby and his songwriting partner Linda McCarthy perform "Paint It Brown," a song about the Great Molasses Flood of 1919.

Who are your musical influences?

I would say the Beatles are one of my greatest influences because I really resonated with their style of very well crafted melodies and chord structures. They are really good songs—that always has influenced me in my own music.

When I moved to Worcester, I encountered another folk community—the coffeehouse circuit. So I got involved with John Henry's Hammer Coffeehouse back in the early 1980s. This is when it was an actual thriving, weekly concert series and bringing in internationally known people from Canada and England. I was helping out with the sound system there. Bill Staines is kind of my idea of the ideal folk singer. His songs have their solos, melodies, and chords crafted—they are so comfortable to listen to. And David Mallet's earlier songs, I kind of emulated them to some extent.

How do you write your original songs? Where does inspiration come from?

If I'm sitting down myself, usually the music naturally comes to me. I can write good lyrics, but it takes time and effort. Whereas the music is really not work. I'm in a duo with Linda McCarthy, a Worcester area singer and songwriter. We met at the Folk 'n A (Worcester Folk Music Society). She read a poem, and she said, “This is just something that I have never been able to put any music to, and if anybody would like to put music to it, here it is!”  When she walked out the door I chased her down the hallway and said, “I'll do it!” and within a few days, I had written music for it, and we played it at an open mike.

When we write together, typically, she writes the lyrics completely on her own. Without any melody at all. Then, she literally hands me the lyrics. I take it all by myself and put music to it. And it works. We perform together.

What is the connection between physics and music?

At a deep level, both music and physics is about understanding something, or how it makes you feel.  When you are a physicist, you are always trying to learn about the universe, and so you are trying to understand something. So that's part of it. But also as physicists, we are human beings, and we find pleasure and joy in the process of understanding. I think there's an emotional aspect of being a physicist that is similar to the emotional aspect of being a musician.

But not everybody who appreciates music is mathematical at all. It's so multi-faceted. I think there's something that any given person can resonate with one part or another.

This profile is the fourth of an ongoing series exploring the interests and hobbies of WPI faculty members outside of their classrooms and laboratories (past profiles include Aaron Sakulich, Terri Camesano, and Susan Roberts). To nominate a faculty member for this series, email dailyherd@wpi.edu.