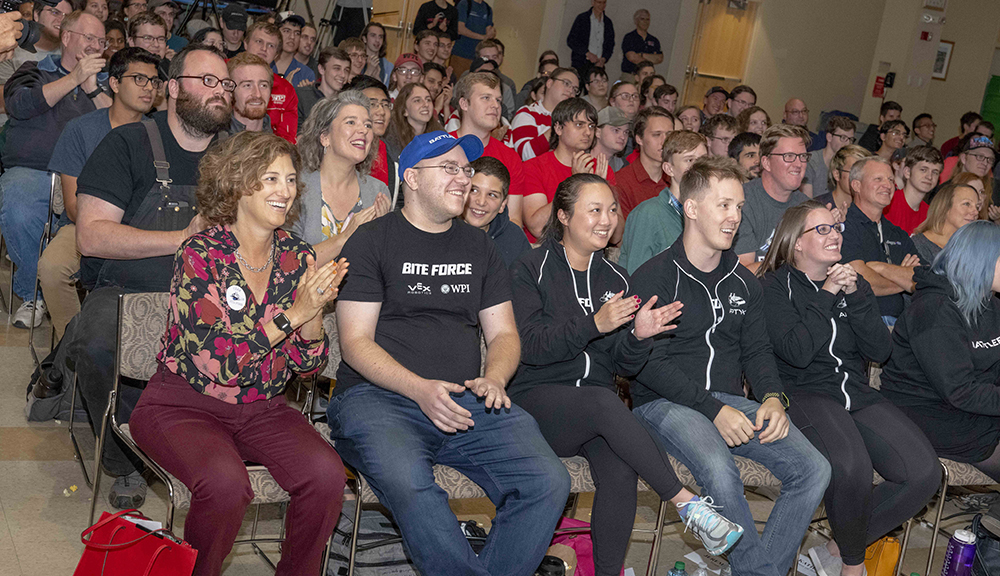 May the Bite Force be with You

When you think of sports dynasties, several teams may come to mind: Boston Celtics, New York Yankees, Chicago Blackhawks, and, of course, the New England Patriots. In the world of robot competitions, that title could arguably go to team Bite Force. For the third time, Bite Force, with designer Paul Ventimiglia ’12 at the controls, was crowned BattleBots World Champion.

“It’s super exciting,” said Ventimiglia just minutes after his win was seen on national TV last Friday night. “I never thought this would be possible.”

During the world championship, which aired on the Discovery Channel, even the commentators took note of team Bite Force’s run of success, calling it “one of the most dominant teams in BattleBots history.”

That comment sent the crowd—who'd gathered in the Rubin Campus Center Odeum for a special BattleBots viewing party—wild. More than 200 people watched the championship round alongside Ventimiglia and three other members of team BiteForce: Jeremiah Jinno ’07, Teena Liu, and Robert Masek. The show was taped several months ago, but the outcome was not revealed until Friday night’s finale.

“WPI really put out the red carpet for us and made us feel like celebrities even though we are just a bunch of kids building robots and having fun,” said Ventimiglia.

In addition to Bite Force, members of 2018 BattleBot teams HUGE, SawBlaze, and Valkyrie joined the viewing party and Q&A panel that followed the show. For many of the students, the chance to talk with not only the world champions but also some of this year’s other top contenders made this event truly remarkable.

Building Robots and Having Fun

Paul Ventimiglia ’12 discusses his 2018 BattleBots World Championship and what it meant to him to return to his alma mater to celebrate the win.

“It was definitely a once-in-a-lifetime experience,” said Jessica McKenna ’20. “It was truly inspiring to be able to meet robotics engineers who are working in the field and to hear from them about their experiences. There was something about the entire atmosphere at the event that felt so welcoming.”

President Laurie Leshin moderated the panel discussion; she pointed out that aside from the bot-crunching action, “the science and engineering that goes into building a BattleBot is well-aligned with the school’s focus on project-based learning.” In fact, Jinno said the skills he gained though project work at WPI—time management, group dynamics, and learning from mistakes—were key to team Bite Force’s success.

That theme resonated with members of WPI’s Robotics Club, who helped organize the event. Club president David Jin said, “The most important things we can take away from this experience is that you have to try. It doesn't matter what you're trying to do, but if you never give it an attempt, you'll never be able to do it. None of this stuff is out of our reach. The teams come from different backgrounds and experiences, but all found themselves in the same place. Hopefully, we can do another similar event in the future." 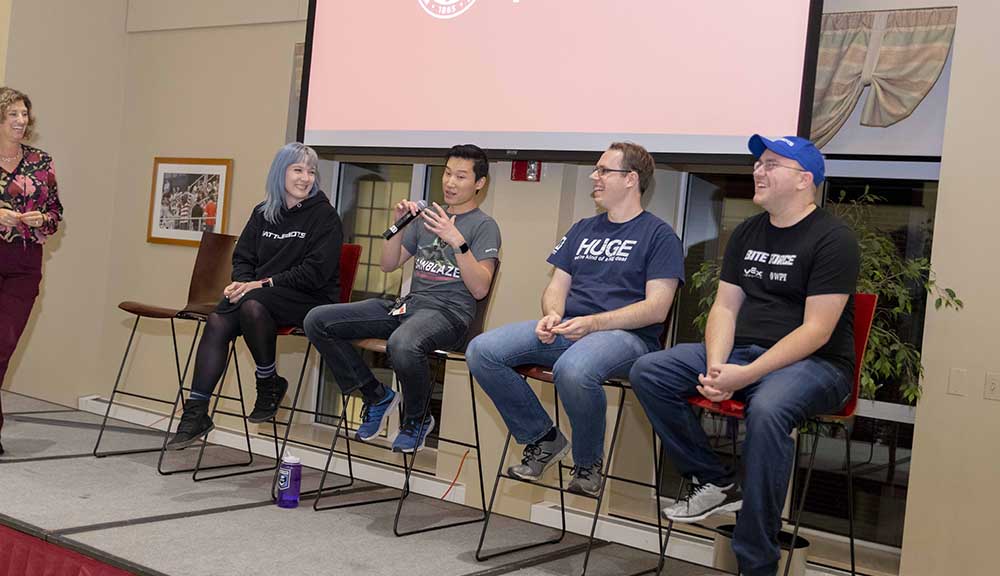 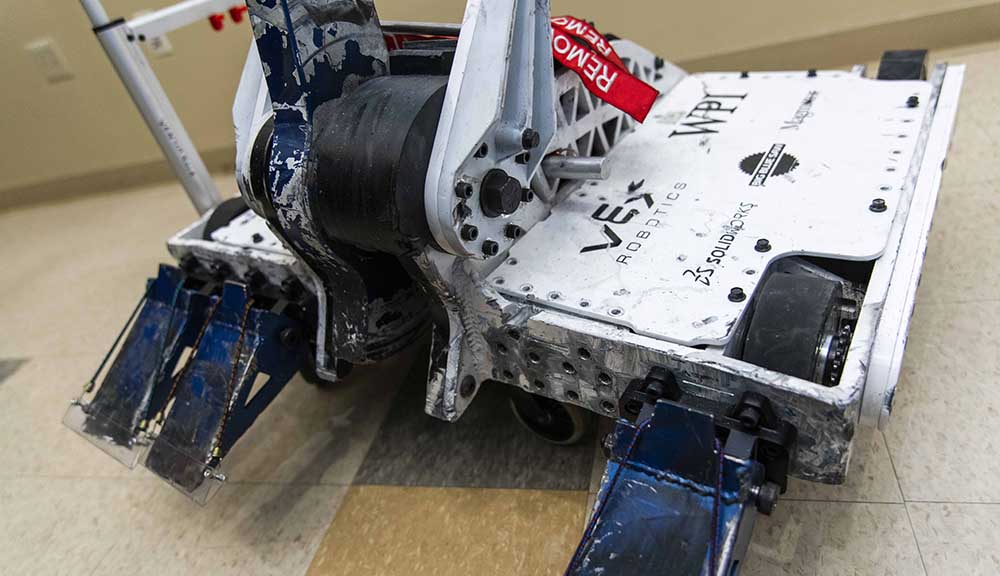 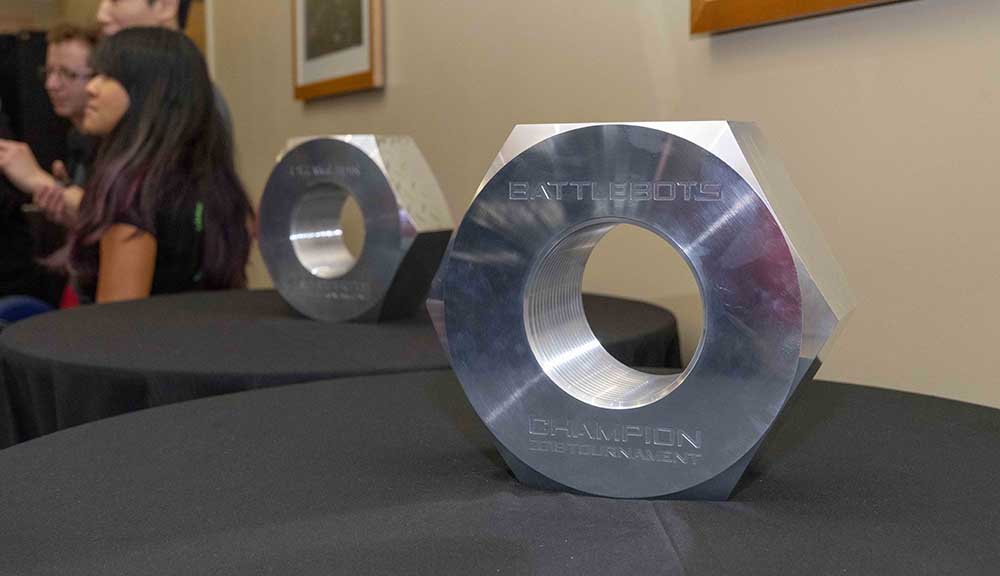 Bite Force's championship trophy was on display following the event. 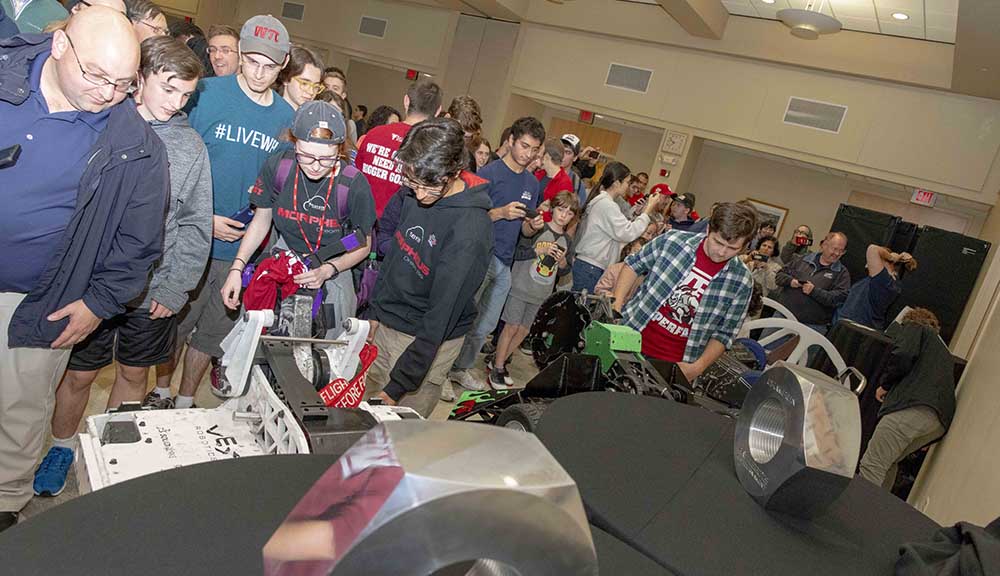 Viewers had the chance to get up close and personal with the robots and trophies after the championship episode. 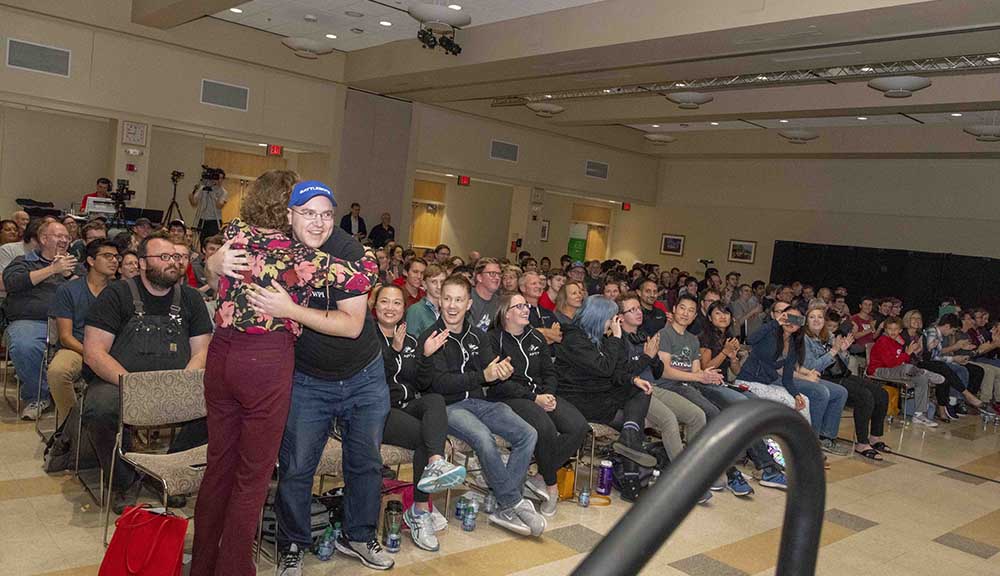 Laurie Leshin and Paul Ventimiglia embrace during the viewing party.