While he’s been in the workforce just a little over a decade, Andrew B. Palumbo, WPI’s new dean of admissions and financial aid, has already achieved several impressive career milestones, including reversing plummeting student enrollment rates at two colleges, helping build a strategic recruitment and marketing plan—and getting fired from a Fortune 500 company.

While not everyone would see being fired as a positive, for Palumbo, a 2005 graduate of Union College in New York, it was a blessing in disguise.

“After I graduated with a bachelor’s degree in history, I did what any good history major would and applied to as many Fortune 500 sales jobs as possible,” Palumbo jokes. “My first job was working in sales at a large information technology services company and I hated every minute of it. I was surrounded by people who only cared about making money and talking about making more money. It was not the right culture for me.”

He continues, “I lasted nine months, until I was let go for not making my sales quota. At that point I took stock of things and realized that I wanted to do something that I was passionate about, which was working in higher education.”

Palumbo’s interest in the administrative side of higher ed actually began when he was a student at Union. During all four years of college he participated in student government and organized Springfest, the school’s largest social event, and he served as student president for the class of 2005.

It was perhaps no surprise that after his brief sales career came to an end, Palumbo returned to Union to take the position of assistant dean of admissions.

“When I began working in admissions I realized that I had found my niche. I really enjoyed getting to work with students and families, and guiding first-year students in particular,” says Palumbo.

His enthusiasm paid off when he was recruited by a former colleague to become the director of undergraduate admissions at the Sage Colleges of Albany.

“Prior to my arrival, The Sage Colleges had missed their new student enrollment target by 50 percent. They were supposed to have 110 students and had 55.” says Palumbo. “I decided to take a chance and see if I could turn things around.”

Under Palumbo’s leadership, incoming class numbers at the Sage Colleges increased by 50 percent in the first year, 100 percent the next year, and 150 percent the following year. In recognition of his work at Sage, Palumbo received the prestigious “40 Under Forty Award” from the Albany Business Review, yet he is modest about his role in the achievement. 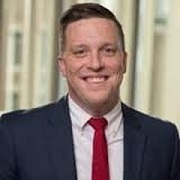 “I basically took a long hard look at everything and realized we needed to streamline and update several processes,” says Palumbo. “For example, we became the second beta client for one of the leading higher ed CRM (customer relationship management) platforms. We worked closely with them to help create the system.”

Palumbo had similar success in his next job as assistant vice president of enrollment management and director of admissions at Plymouth State University, where he turned a three-year enrollment decline into record enrollment numbers in just two years.

“It was a bit of a shock for me to go from a small private school to a larger public institution, but I focused on strategy and innovation at Plymouth as I did at the Sages, including updating technologies and working to design a team structure and atmosphere that supported our mission and goals.”

Palumbo’s new position at WPI is both a natural fit for his rising career trajectory and a homecoming of sorts. He grew up in nearby Sutton, and his father is mathematics alumnus of the WPI Class of 1974.

“I’ve always been fond of WPI,” says Palumbo. “When I was growing up I used to come to campus to watch sporting events—and I’m a big fan of the WPI Plan. It’s incredible to think that WPI had the foresight to create something 45 years ago that many schools are struggling to develop today.”

Palumbo notes that he is also excited to work with WPI administrators and staff who have a proven track record of success.

“The opportunity to lead two strong teams in admissions and student aid & financial literacy at a place like WPI is a dream job,” says Palumbo. “While the landscape of higher education is rapidly evolving and there will be always be challenges, WPI has done a great job of attracting the best and brightest students. The way I see it, my first job here is learn, and my second is to work with my team and the WPI community to craft the strategy to achieve WPI’s future enrollment goals.”