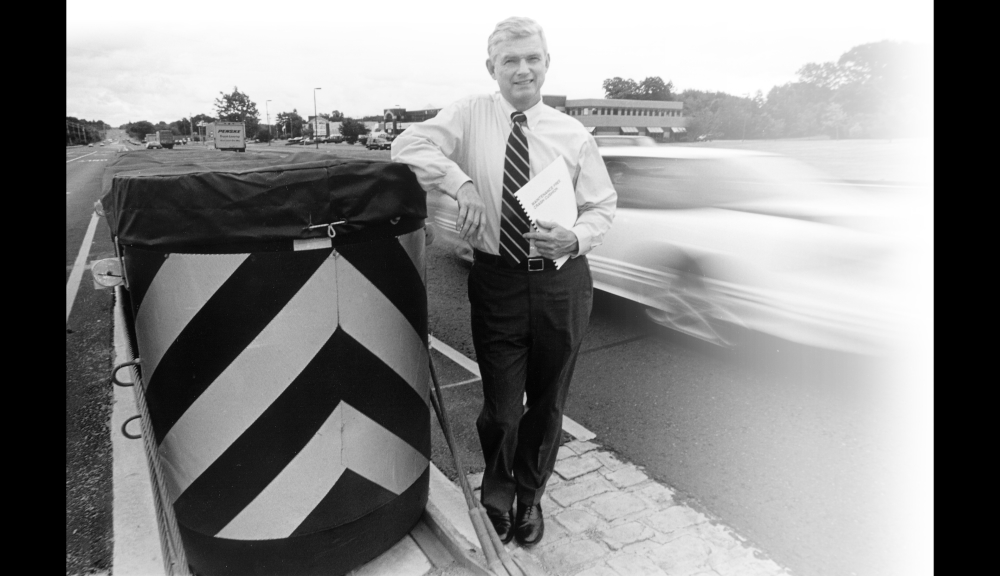 Former WPI Provost Jack Carney, who was a pioneer in the development of "impact attenuation devices" to protect highway workers and drivers, is seen with a crash cushion he designed to protect occupants in cars striking highway median barriers

As a researcher, Carney saved lives with his innovations in crash cushions; as WPI’s chief academic officer, he helped advance its renowned global projects program

John F. Carney III, former provost and vice president for academic affairs, died April 24, 2019, at his home in Cambridge, Mass., after suffering complications of multiple myeloma. He was 77. Predeceased by his wife of 45 years, Patricia Reynolds Carney, he leaves two daughters and five grandchildren.

Carney joined the WPI faculty in 1996, calling himself “an admirer of the institution since it introduced its WPI Plan.” In welcoming him, President Ed Parrish, who had worked with Carney at Vanderbilt University, praised his close and harmonious relationship with the engineering faculty. “He considers himself a faculty member first and an administrator second, and holds the firm belief that the two should work together in partnership for the good of the institution.”

A Lowell native and graduate of Merrimack College, he earned his master’s degree and doctorate in structural mechanics from Northwestern University. He went on to earn an international reputation as an expert in automotive safety. He held 10 patents, published numerous papers, and served as chair of the Transportation Research Board's Committee on Roadside Safety Features, as well as chair of the executive committee of the Highway Division of the American Society of Civil Engineers.

Carney’s research focused on “impact attenuation devices” (crash cushions) made of compressible cylinders as a substitute for the rigid concrete barriers that could cause injury or death in the event of a collision. An article in the Summer 1997 issue of WPI Journal detailed his work. Starting with truck-mounted attenuators designed to shield roadside highway crews from collisions, he went on to develop similar devices to protect errant motorists and passengers. He later turned to designs for safer passenger trains, buffering the cars’ rigid chassis with “sacrificial crush zones.” His “forgiving” designs greatly improved safety on highways and railway.

In his eight years at WPI, Carney increased the number of tenure-track faculty, helped launch the Center for Educational Development, Technology, and Assessment, and kept the university on an even keel through a downturn in the national economy and a decline in applications to engineering schools. In WPI’s 150th year history, True to Plan, Carney receives recognition for his role in expanding the university’s investment in the Global Projects Program. Rick Vaz, director of WPI’s Center for Project-Based Learning, gives Carney and President Parrish credit for helping turn a visible, but modest program into a powerhouse. “Parrish got it and supported it,” Vaz says. “And his provost, Jack Carney, got it and supported it. And that’s what facilitated this growth.”

The support of Carney and Parrish and the leadership of Paul Davis, dean of the Interdisciplinary and Global Studies Division from 1999 to 2006, led to a substantial investment in enhancing the way WPI prepared faculty for the demands of global project advising. Those efforts were honored in 2003 by TIAA-CREF, which awarded WPI a Certificate of Excellence through its Theodore Hesburgh Award program, which recognized the substantial portion of the WPI faculty that was involved in advising off-campus projects at the time.

Carney and Parrish also signed off on the proposal to create a “global” project center in Worcester, True to Plan notes. Championed by Lance Schachterle, professor of humanities and arts, and other faculty members in the Global Projects Program, the Worcester Community Project Center, formally launched on April 9, 2001, was designed to bring the benefits of student project work to WPI’s home city and to build stronger ties between the university and Worcester’s government, nonprofit, and industrial communities. In 2007 the center was honored with the Colleges of Worcester Consortium’s inaugural George I. Alden Award for campus-based educational excellence. 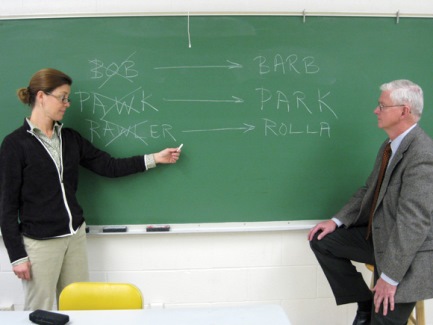 Always willing to laugh at himself, Carney, a Massachusetts native, was schooled in elocution by Missouri S&T English Chair Kristine Swenson. Photo by Charlotte Divincen. Courtesy of Missouri S&T.

After retiring from WPI in 2005, Carney went on to become chancellor of the University of Missouri Rolla (UMR), where he shepherded the institution though a restructuring and a name change to Missouri University of Science and Technology. He was welcomed with much ribbing about his New England roots and his devotion to the Boston Red Sox. (He arrived in Missouri the year of Boston’s landmark World Series victory over the St. Louis Cardinals.) Introducing him to the community in a magazine profile called “A Whole New Ball Game,” writer Andrew Careaga (now chief marketing and communications officer) reported that Carney graciously accepted—and took to wearing—the Cardinals cap he’d been given.

In 2010 Carney was honored with the Chief Executive Leader of the Year Award from the Council for the Advancement and Support of Education’s District VI. Upon his retirement from Missouri S&T in 2011, he was lauded as a great communicator who successfully advanced the institution’s goals. One alumnus and former student council president recalled him as “a man who was objective and willing to make the tough decisions while still able to remain compassionate.”

Carney’s former colleagues at WPI, quoted in UMR’s introductory profile, called him a “quiet leader” and a “consensus builder.” In a poem called “You Don’t Know Jack,” composed for Carney’s retirement from WPI, former director of research administration Francois Lemire wrote, “Jack didn’t play games or put on charades,” calling him a fair, true colleague who “fought for us all.”

Adjunct teaching professor and former provost John Orr recalls Carney as “the sort of person with whom people truly enjoyed working, inspiring trust and a commitment to do the best job possible. He led academics at WPI with vision, skill, and great humanity.”

Straightforward, approachable, knowledgeable, empathetic are the words used by Schachterle, who served under Carney as assistant provost for academic affairs, to describe his former colleague. “I recall when he interviewed for the job, he said ‘What you see is what you get.’ What WPI got was a highly effective leader admired by everyone in the community, because he always listened. If he disagreed with you, he patiently explained why. And he got things done, the right things.”

At the end of the workday, Carney often joined Schachterle for the walk home. Their perilous dash toward Drury Lane, across four lanes of unpredictable traffic on Park Avenue, was an ongoing source of amusement to colleagues who caught them in the act. Schachterle still finds humor in the image of “two middle-aged, professionally dressed academics running for their lives to the safe side of the street.” He adds, “I always took comfort in thinking that I was safe in the hands of a world-class expert in car crashes.”

“We lost a good man,” concludes Professor Diran Apelian, who was succeeded by Carney in the Office of the Provost. “He was always supportive of WPI’s mission and appropriately expanded our offerings. He was kind, thoughtful, and a most considerate person. It was never about him, but always others whom he served.”