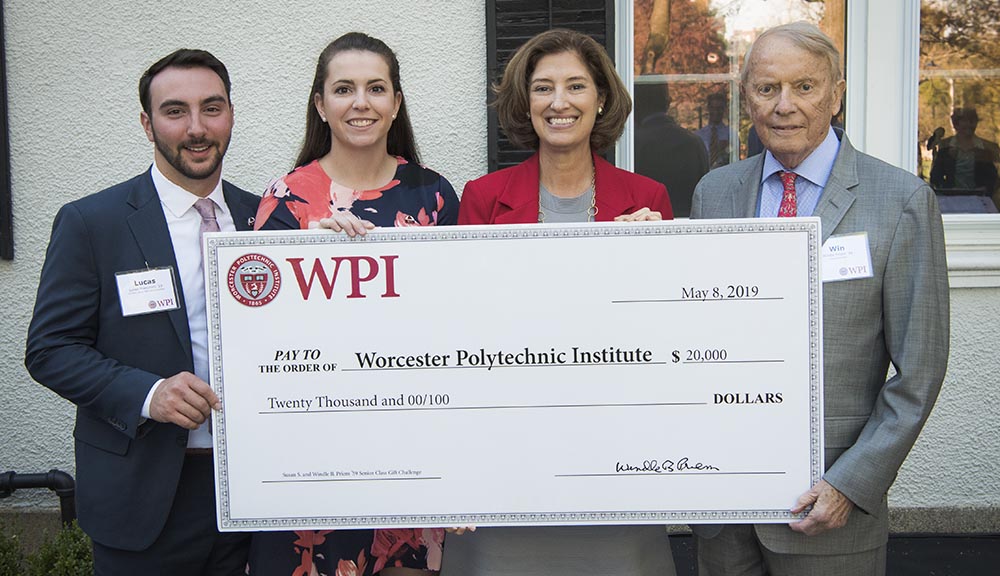 In Memoriam: Win Priem ’59, Trustee Emeritus Who Exemplified ‘Giving Back’

Win Priem ’59, WPI trustee emeritus and dedicated supporter of the university, passed away August 7, 2020. A Worcester native, Mr. Priem had a long and distinguished career in executive recruiting at the world’s largest executive placement firm, Korn Ferry. After positions at Marine Midland Bank and the U.S. Small Business Administration, he joined Korn Ferry in 1976. He quickly made his mark, founding the Financial Services Division and recruiting more than 100 CEOs for financial institutions. He went on to hold several key leadership positions in the firm, including president of the North American Region, chief operating officer, and president and chief executive officer after leading a successful public offering in February 1999. He was also a director of Korn Ferry from 1992 to November 2002. He retired from the firm as vice chairman in December 2003, when the it had grown to 2,200 employees at 40 locations in 17 countries.

Highly respected by his peers, he received the 2000 Gardner W. Heidrick Award from the Association of Executive Search Consultants.

While achieving professional success, Mr. Priem never forgot his alma mater, where he earned his degree in mechanical engineering and was a member of Phi Gamma Delta, the student newspaper and yearbook, Sailing Club, and the American Society of Mechanical Engineers. In 1991, he was elected to the WPI Board of Trustees. He gave generously of his time and talent to help guide his alma mater at the highest level until 2009 when he became trustee emeritus.

He also gave generously of his treasure, especially to inspire WPI’s youngest alumni to adopt the habit of giving back to their alma mater. He focused his efforts on WPI’s Senior Class Gift, a tradition that dates back to 1910, and that has marked the university campus and community with physical and nonphysical legacies, such as scholarships and program support, created by fundraising from each graduating class. In the early 2000s, Mr. Priem noticed that giving by WPI’s graduating seniors had begun to decline, and he decided to inspire them with a Senior Class Gift Challenge. In 2002, he and his wife, Susan, offered to match up to $15,000 raised for the Senior Class Gift—if at least 40 percent of graduating students participated in giving. Students have been inspired to meet the Priems’ challenge year after year, and in recent years have met an even tougher challenge: 40 percent participation from the graduating class and $10,000 raised.

In 2019, the Priems made their challenge permanent by establishing the Susan S. and Windle B. Priem ’59 Endowment. To achieve the matching funds, the graduating class will now need to reach 40 percent participation and raise $15,000. This generous gift from the Priems, and the inspiration it provides to students and young alumni, is a profound legacy Mr. Priem has created at WPI.

“Win exemplified engagement in the life of WPI and philanthropy, and I am forever grateful that he recruited me to the WPI Board of Trustees,” says Jack Mollen, WPI Board Chair. “He will be missed by his fellow trustees and his WPI family.”

Mr. Priem’s distinguished career and service to his alma mater were recognized by his peers. The WPI Alumni Association awarded him the 1989 Robert H. Goddard Award for Outstanding Professional Achievement and the 2009 Herbert F. Taylor Award for Distinguished Service to the university.

In addition to his WPI degree, he earned an MBA from the Babson Institute of Business Administration at Babson College and attended the Program for Management Development at Harvard Business School. He also served in the U.S. Naval Reserve as an Air Intelligence Officer from 1959 to 1962, Lt. junior grade, and graduated from the Navy’s Officer Candidate School in Newport, Va.

He was a director at EMC Corporation, a trustee of Lahey Clinic, and a member of the Board of Overseers for the Lahey Clinic.