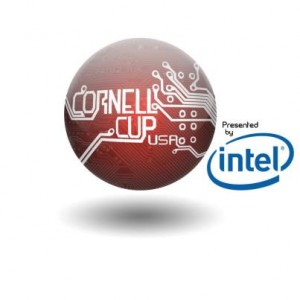 Cyber Physical Systems, a robotics team made up of four WPI students, topped 28 other teams to earn second-place honors at the second annual Cornell Cup USA, held at Walt Disney World in Orlando, Fla., May 3-4.

Thirty teams from 18 universities across the US competed in the event, which challenges students to use the latest Intel Atom board to create embedded technology devices that address real-world needs and offer solutions that can catch a technology investor’s eye.

For the competition, Cyber Physical Systems developed a semi-autonomous wheelchair and a body-brain computer interface that uses cost-effective, modular sensor packages for easy mounting to powered wheelchairs. The team’s wheelchair is designed in part for individuals who have cognitive abilities but are unable to move or communicate verbally.

He adds that the annual competition is an excellent opportunity for WPI students to network not only with their peers from other universities around the nation but also with engineers and leaders from companies such as Intel, MathWorks, Solidworks, and MITRE.

Sinyukov began designing and configuring the hardware in 2011. The seniors then joined the project last August, poring over design details and placing assistive features such as sensors that detect walls and other barriers on the wheelchair. The team submitted its project proposal in October 2012. From all proposals, a total of 30 teams were selected to participate.

According to Padir, the humanitarian value of the project was not lost on the judges. “Our team impressed the Cornell Cup participants and judges not only with how they transformed their multidisciplinary engineering knowledge into a practical application, but also with the potential societal impact of their project. Many individuals with physical and mental impairments can benefit from low-cost and modular sensor systems as enabling technologies for semi-autonomous powered wheelchairs,” he says.

A second WPI team, FIVOLTS, also participated in Cornell Cup USA and demonstrated a health tracker that features a wearable wireless pulse monitor (implemented on eyeglasses) and works together with processing applications on mobile devices. According to FIVOLTS team member Joy Xu Yichao, the device will soon be shipped as a commercial electronic device.

The first-place prize of $10,000 went to University of Pennsylvania team Titan for its exoskeleton arm design.