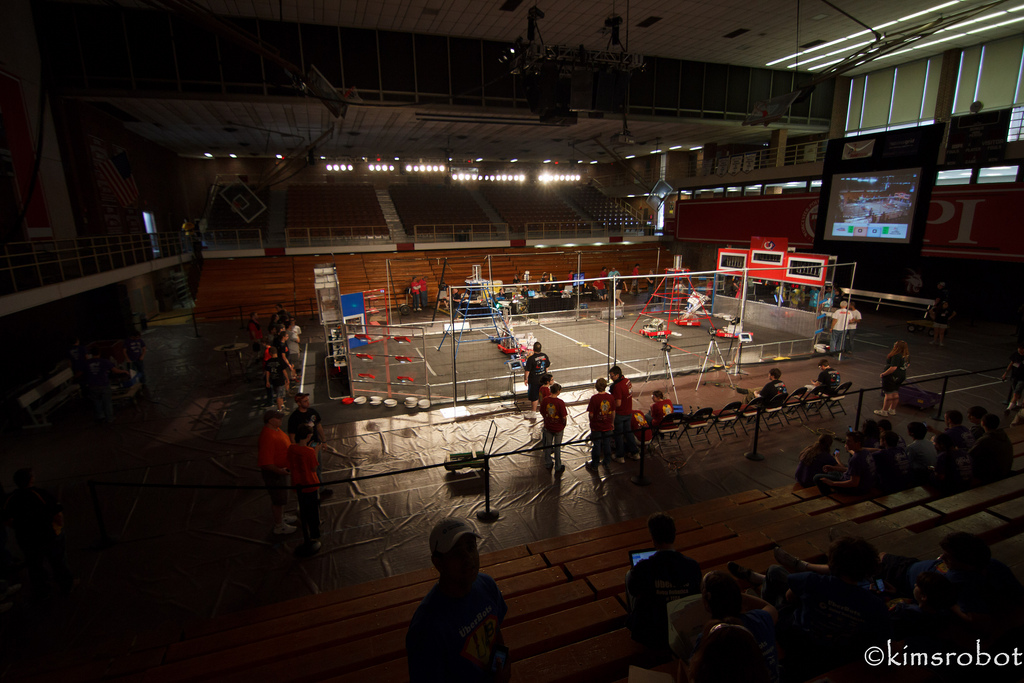 For years WPI has sponsored and participated in programs from FIRST Robotics Competition (FRC). This week, for the first time, the university will host an NEFIRST District event featuring teams from all over New England.

Though WPI has been hosting FRC events since 2010, this year’s marks the change of format in New England from ‘regional’ to ‘district,’ which will allow the teams involved bigger and better opportunities, should they prove victorious.

“By adding more events that cost less for participants, the goal is to lower the barrier of entry for new teams,” says Colleen Shaver, assistant director of the Robotics Resource Center at WPI, “while giving all teams more play time for their investment.” The event will take place over two longer days instead of the usual three.

WPI’s association with FIRST (For Inspiration and Recognition of Science and Technology, founded by Dean Kamen in 1989) dates back to its sponsorship of events and teams since the early days of that organization. Since 1995, WPI has been offering scholarships to FIRST participants, being the premier institution to do so, and paving the way for the “FIRST Scholarship Program” that now gives out over $19 million to participants each year.

Shaver works hands-on with participants, applicants, and recipients of these endowments. “It’s for these industrious young minds that the events exist,” Shaver says.

“In general, the FIRST Robotics Competition is about inspiring students to pursue careers in STEM by giving them a hands-on project to work on with mentors,” Shaver says. “In a lot of ways, it brings the classroom to life by showing them how to apply disciplines like math and physics to a real world problem. Additionally, working with mentors allows them to see the types of careers they could have and gives them role models in their field of interest.”

She adds that the university’s involvement is not limited to merely the events themselves. “WPI has hosted one of the most popular FRC off-season tournaments,BattleCry@WPI, for 15 years.  We have been Operational Partner for the FIRST LEGO League [middle school] program since 2000.  WPI also creates the software libraries used by thousands of FRC teams and works directly with FIRST to improve and provide software and controls systems for competing teams.”

The guiding principle of FIRST is very much in line with WPI’s “Theory and Practice.” Both stress the active application of scientific, research-based, and theoretical knowledge to real world settings for practical and translational purposes. FIRST founder Dean Kamen avows the company’s mission is “to transform our culture by creating a world where science and technology are celebrated and where young people dream of becoming science and technology leaders.” (http://www.usfirst.org/aboutus/vision)

Similarly, Shaver emphasizes the importance of instilling the involved students with a sense of accomplishment. “Getting a working robot out on the field is a feat in itself,” she says, “and when your robot finally accomplishes what you designed it to do, it can be really amazing. Winning the event is just icing on the cake.”

The event will be held at the Harrington Auditorium & the Sports and Recreation Center this Thursday and Friday, March 13–14, with teams arriving for “Day 0” on Wednesday at 5pm, for preliminary work and practice. Further information for teams can be found at http://nefirst.org/event/2017-wpi-district-event/.