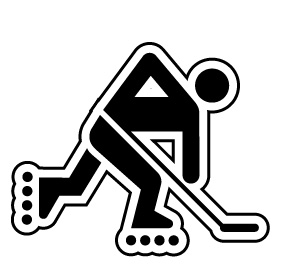 Did you know WPI has an in-line roller hockey club?

Don’t feel out of sorts if not – most people aren’t aware that WPI’s in-line roller hockey club has been an active club team for more than a decade.

Club president Stephen Johnston, a junior chemical engineering major, says the club is a good alternative for students who don’t have the time for a full-on ice hockey team commitment but still want to play. The coed club (although this year’s roster includes only men) welcomes players of all levels who just want to enjoy a fun team sport and stay active.

“I’ve been playing hockey for my entire life,” says Johnston. “I played ice hockey as a kid and wanted to keep active in college.”

The club plays in the Central Massachusetts Elite Hockey Leagues, a private in-line and dek hockey league at a rink in Uxbridge, with the game season lasting from January through April. The team plays 10 games a year against eight other teams—many of which have WPI alums on them—and playoffs following. The dozen or so members carpool for the 25-minute ride, and are linked by both the love of the sport and the university they represent.

The WPI team has a long history and even coach Derek Pepicelli ’09 played all four years while he was an undergrad at WPI. Now in his third year as coach for the team, he says he still loves the sport. “This is a bit more relaxed, and we’re more of a club,” says Pepicelli, who grew up playing street hockey. “This keeps me involved with the sport and with WPI. It keeps me in touch with the campus.”

In-line roller hockey is different from ice hockey in a few key ways, but the differences bring new challenges that players often welcome. There’s no ice, of course, so the smaller rink has a hard plastic surface, and the pucks are different. Rather than a smooth puck, in-line pucks have small protrusions to help them glide over the plastic surface. But that also makes them bouncier and harder to control. And they still hurt when they hit an arm or a leg.

The teams play four-on-four, not the five-on-five ice hockey set-up, and this is a no-contact league, so there are no hip checks to send players flying. And in this no-brakes league, stopping on fast roller blades is trickier than stopping with the quick hard turn of an ice skate.

Club vice president Matthew Sprague, a senior civil engineering major, says the club works for him because he hadn’t played hockey in a while and just wanted to find something fun to keep active. “It can be difficult to switch from ice to in-line,” he says, “because the surface is different and there is more friction.”

And the time commitment for a club team is easier to handle. Where most teams practice every day, the club meets twice a week – practices on Sundays and games on Thursdays. There’s cardio conditioning and running to keep up during each 22-minute half of every game. Despite the relaxed approach, this is still hockey. “It’s a competitive league,” says Johnston, “but we just try to have fun.”

There’s also just the sheer love of playing the sport. “It’s a stress reliever for me,” says Johnston. “It’s nice to get out on the rink and get my mind off school.” Sprague agrees. “I’m a senior and there’s a lot of work,” he says. “This is something to look forward to, and to take a break and have some fun.”

The team welcomes fans to cheer them on at games and encourages anyone looking for a little extra activity to join the club. No experience is necessary, but a sense of fun and a little competitive spirit helps.

Games remaining in the season are being held March 13, 20, 27,and April 3 with a playoff game scheduled for April 10. For more information, contact rollerhockey@wpi.edu.