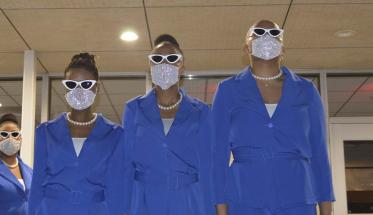 When Noelle Morgan ’22 was younger, she was quick to notice that when she was out and about with her parents while they were wearing their Greek letters, they were likely to be greeted like old friends by people they didn’t know.

“They would run into strangers on the street, and it was like instant family,” she recalls. That immediate connection stuck with her and proved to be a catalyst behind her goal of starting a Zeta Phi Beta chapter at WPI—it became official last month. “I experienced how much of a community it can foster among strangers, let alone a community in a college. I wanted that at WPI.

“You have family wherever you are,” says Morgan, who’s graduating this year with a BS in electrical and computer engineering. “The message is you have someone who is your friend wherever you go in the world. That’s tremendous in terms of support because you never know what might happen in life. That was something I wanted to have a part in—you have a net to fall back on.” 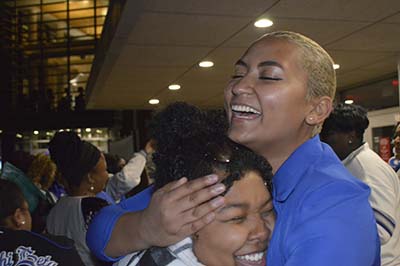 The appeal of this kind of support and security is especially important for building a community when you’re in college, she says. “It all goes hand in hand with the tenets of sisterhood. It’s very much a real sisterhood with a shared history, culture, and ideals—there are even songs and dances you probably all know. It’s very securing, especially if you haven’t been part of something like this before.”

The logistics for bringing the sorority to fruition were complicated, but Morgan remained undeterred in her focus to create that invaluable sense of sisterhood, support, and security. Acting as a single-handed public relations team, she talked up the plans to form a Zeta chapter anywhere she could—through newsletters, word of mouth, or just hanging out with others.

Her efforts didn’t go unnoticed—in fact, they’re exactly how Marissa Desir ’23 first learned of the sorority and got involved. She'd always been interested in joining a historically Black Greek-letter organization, and after noticing Morgan’s advertisements around campus, jumped at the chance to get in touch with her.

Desir is now the chapter’s first president, something she describes as "nothing short of a total honor. While we were at the beginning phases of chartering, I dreamed of becoming the president at one point during my college experience,” she says, explaining that her motivation to run for president came from a desire to address the voices of BIPOC WPI students over the years and to create a feeling of sisterhood among Zeta Phi Beta members.

“Once becoming a WPI student, I know how difficult it can be to find a community that’s welcoming for Black women,” she says. “We hope the Psi Phi chapter can cater to members who yearn to express their true selves and uniqueness.”

Morgan agrees. “This was to make sure there was a community for Black and Brown women on campus—to have a sister to look after you and support you,” she says. “This is what I wanted to create here. If something happens, you have someone you can contact and someone who can take care of you in ways that other people might not know how to do. I hope this encourages other Black and Brown women to choose WPI for their undergraduate degree because they do look for that when looking at colleges.”

“This was to make sure there was a community for Black and Brown women on campus—to have a sister to look after you and support you. This is what I wanted to create here. If something happens, you have someone you can contact and someone who can take care of you in ways that other people might not know how to do. I hope this encourages other Black and Brown women to choose WPI for their undergraduate degree because they do look for that when looking at colleges.” -Noelle Morgan ’22

Morgan worked over a period of three years to get the proper—and complicated—process of working with WPI and the national Zeta organization to establish the sorority at WPI. She began by collecting enough valid signatures (all of which, in combination with student ID numbers and addresses, she had to gather while she was remote in Maryland during COVID) to first establish the Women Interested in Zeta club—a precursor to the sorority. Once the club was official, it needed members, and Morgan needed to find a nearby Zeta chapter to charter the club as it progressed to a full-fledged sorority. Then, getting signatures again (this time for a sorority, not a club); forming a recognized sorority was next.

“The adrenaline rush and whirlwind of emotions were so strong, but it was so exciting to finally achieve our goal,” Desir says of the ceremony, adding that the group took great care to execute every aspect of the event with grace and precision. “The overwhelming love from members of other chapters of Zeta Phi Beta Sorority, Inc. and the other organizations of the National Panhellenic Council was such an incredible experience.” 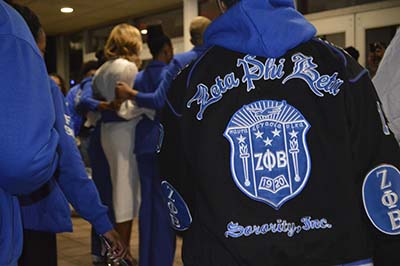 Morgan is proud to graduate knowing she succeeded in finishing a process that was so important to her. But in the end, she says, this is not about her name being attached to Zeta Phi Beta’s WPI beginnings—it is about the fact that it exists at all, and is a reflection of the collaborative efforts of individuals and offices across campus who helped her get everything in place. “After all the work and the desire to build this community, it’s finally here. We’re excited to get things rolling for next term and to be a presence at WPI.”

As she moves on from WPI—next up is a role as a firmware engineer with Cambridge Consultants—Morgan says the legacy of Zeta Phi Beta will be lasting and significant. “I feel a sense of relief and it feels almost surreal to wear the letters that I brought from home on the WPI campus, letters WPI has never seen before. These are sticking around. They can represent a part of my family and a part of the things I have done on campus.” She’s had a chance to talk with some prospective students and their parents, and they were excited to see the chapter on campus, something she says speaks to the importance of representation.

When the sorority begins its first full academic year in the fall, Morgan will participate as a graduate member of the organization. She hopes to see all the typical events that will attract and keep members, ranging from study halls and craft and game nights to formal events, and she will keep an eye out for members proudly wearing their blue-and-white colors on campus. “I’m looking forward to that and continuing to promote the tenets of the sorority—school, service, sisterhood, and finer womanhood—in a way that’s beneficial and visible to the community.”

Students interested in learning more about the Psi Phi chapter of Zeta Phi Beta Sorority, Inc. and its chartering class can connect with them through the chapter's Instagram account.