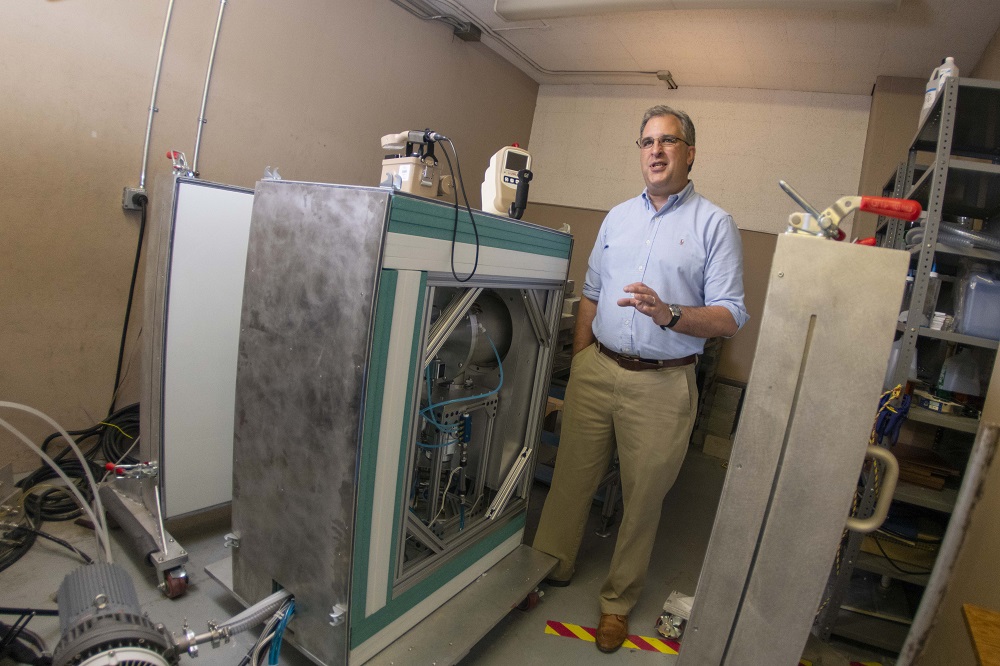 WPI professor David Medich stands next to the neutron generator he is developing for medical imaging.

One grant, totaling $399,999, will support a graduate fellowship program in which two WPI doctoral students will be focused on two research projects: one will develop new models for emergency response dealing with radioactive materials; the other will develop new techniques to obtain higher resolution medical images.

The second grant will go toward developing a highly talented and competent future workforce to support the nuclear power industry. The grant will provide $199,988 in scholarship support to 12 undergraduate students, primarily juniors and seniors.

The NRC awarded 51 grants in fiscal 2018 to 40 academic institutions in 25 states, totaling more than $15 million. WPI was just one of 16 universities nationwide to receive fellowship grant awards, and one of just 18 to receive scholarship grant awards.

“Over the past ten years, this program has helped to achieve our goal of enhancing academic excellence, promoting knowledge transfer, and producing a future skilled workforce needed to accomplish nuclear safety,” said Raymond Furstenau, director of Nuclear Regulatory Research for the NRC. “We are very pleased that the NRC can positively impact individuals at WPI and other educational institutions with these grants.”

In recent years, WPI students in the NSE program have gone on to work in a number of nuclear science and engineering fields, including positions as health physicists at Newport News (Va.) Shipbuilding and Boston Children’s Hospital, and various positions within the nuclear industry.

The new grants build on earlier funding to WPI from the NRC. In 2014, the agency awarded WPI four nuclear education grants totaling more than $1.1 million for scholarships, fellowships, curriculum development, and medical and health physics research within its NSE program.

David Medich, associate professor of physics and director of the program, said this round of funding will go a long way to furthering the program’s offerings, particularly in the areas of health, physics, and medical physics. WPI’s nuclear engineering program was discontinued more than a decade ago due to the decline in the domestic nuclear power industry. However, it was revitalized as the current NSE program in 2012 in response to renewed interest

in nuclear energy as a greener alternative to electricity generated with fossil fuels. Additionally, the aging of the nuclear engineering workforce is creating more demand for graduates to work in various facets of the nuclear industry.

“WPI has increasingly received attention from the NRC as a university that is working hard to both conduct important nuclear science research and prepare undergraduates and graduates for the nuclear science and engineering fields,” said Medich, principal investigator for the grants. “We’re confident the most recent funding will allow us to make significant advancements and expose younger students to this important industry.”

As part of the graduate fellowship program, Medich plans to develop ways to better manage radioactive materials in emergency situations. For example, in the event of the explosion of a radioactive dirty bomb, scientists would need to understand the scope of the exposure. WPI has been working with Sandia National Laboratories to develop new models that simulate how radioactive particles become re-suspended in the atmosphere. “This NRC grant will allow us to take our data to further validate our model and replace the current state-of-the-art model,” said Medich.

The other graduate program aims to work to improve medical imaging technologies. For example, he said, the gamma rays emitted by the radioisotopes used in current cardiac scans create low-resolution images that are difficult to read. With the NRC funding, Medich will continue to direct research on a novel type of functional medical imaging that uses neutrons. The technology has the potential to produce images with resolutions up to 100 times higher than what can be obtained with current medical imaging technology. Specifically, the grant will fund the further development of a five-foot tall, stainless steel neutron generator at WPI, one of the largest such devices at a university in the United States, Medich said.

Medich is also heartened by the funding for undergraduate programs, which will enable students interested in nuclear science and engineering to apply for scholarships. Prior to starting this scholarship, a candidate must sign an agreement to pursue at least six months of employment within the nuclear industry for each year or partial year of support.

“The goal is to help them become very prominent in their fields and put them in a position to develop specific skills,” he said.