Forum on Academic and Corporate Development 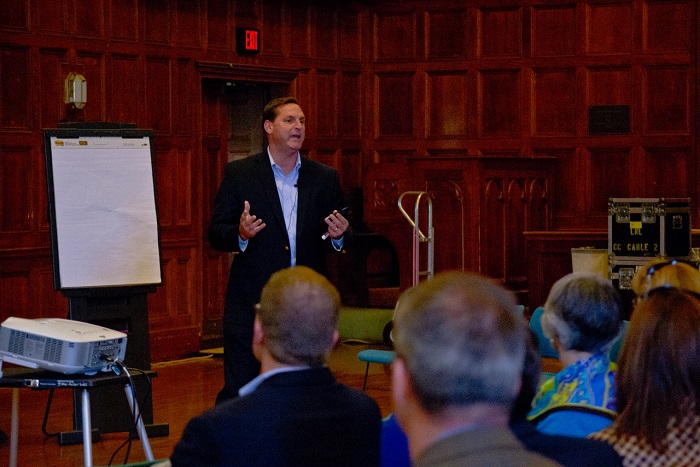 Stephen Flavin says a diverse group of departments
within Academic and Corporate Development perform
work that supports its mission of connecting WPI to
external organizations.

A new WPI event series kicked off on Tuesday evening with a discussion about the role of Academic and Corporate Development (ACD) at WPI.

Billed as an open forum for community members to learn about and discuss a topic of broad interest, the event was run by provost Eric Overström and secretary of the faculty John Sullivan. Stephen Flavin, dean of academic and corporate development, led the conversation.

In describing the new series, Sullivan says that the organizing committee was striving to create a truly open dialogue.

“We ran a previous series of similar events, but they were more about the delivery of information than an exchange of ideas. We are hoping this new series will be an authentic conversation where everyone can speak their minds.”

Flavin agrees, adding that he saw the event as an opportunity to not only share information but also get feedback and hear others’ opinions. 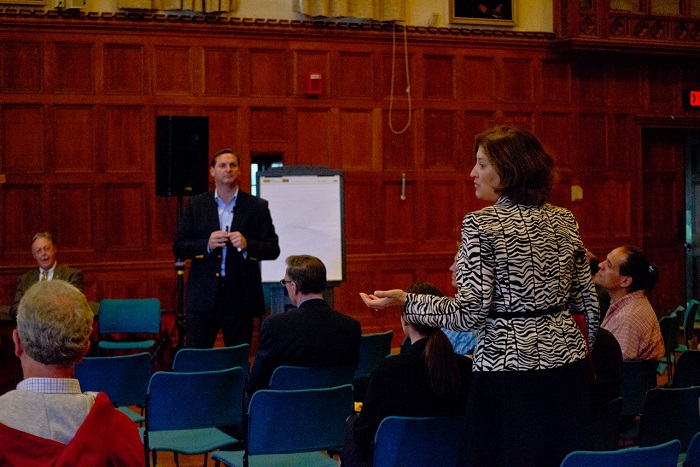 President Leshin makes a point during a discussion on
the role of Academic and Corporate Development.

“The Academic and Corporate Development Division was formed in 2010, and I’m finding that the community at large is still unclear about our message. I hope to communicate what we do, how we do it, and why. I’m also looking forward to getting some feedback and addressing their questions.”

About 55 faculty and staff members, including President Leshin, attended the event, which began with an informal networking session before Overström introduced the discussion. He described how the committee had chosen ACD as a topic, based on questions that came up during faculty and administrative retreats over the summer.

“At first you might wonder why we have such a diverse group of departments, but the link becomes obvious when you see that all of these groups do work that supports our mission, which is to connect WPI to external organizations.”  – Stephen Flavin, dean of academic and corporate development

Flavin also discussed some of the misconceptions faculty might hold about ACD and provided some interesting counterpoints. For example, he noted that while many people believe the CDC primarily connects students with large companies, in reality, two-thirds of WPI students are hired by small to mid-sized organizations. He also highlighted areas of potential improvement, such as integrating the BETC with campus by using it for training and project support for undergraduate and graduate students.

The ensuing collective conversation drew significant audience participation and touched on many important topics, including how faculty might participate more in teaching CPE courses, differences in student populations in continuing and traditional education, and establishing a stronger relationship between ACD and the WPI Office of Innovation and Entrepreneurship (INE).

Of the latter topic, Leshin stood up from the audience and stated, “Non-traditional learning is a growing trend in higher education. At WPI we have a real opportunity to engage learners of all kinds and in all stages of their lives. The INE offers rich connections to students and alumni who are forming their own companies.” 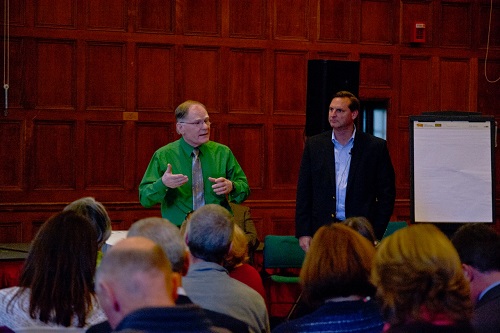 Throughout the discussion, Flavin also stressed that all ACD programs depend on faculty support and involvement.

“There is no such thing as CPE programs, only WPI programs,” he said, “Anything we’ve ever had any success doing, has been with faculty involvement and support  – it’s collective success.”

In reflecting on the event he says, “I think it went very well, and I’m really pleased with the level of participation from faculty—their questions were extremely thoughtful and supportive of what is right for WPI.”

In the continued spirit of community engagement, Sullivan invites all WPI community members to suggest ideas for future conversation sessions.