Masque Production of The Beams Are Creaking 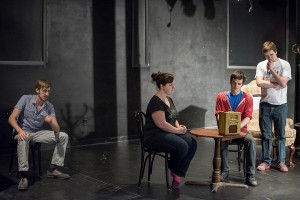 • Masque’s A-Term production is The Beams Are Creaking, a compelling, real-life drama about Dietrich Bonhoeffer, a German theologian who defied the Nazis, which ultimately led to an assassination attempt of Hitler.

Written by Douglas Anderson, the play has been described as a political thriller filled with a compassion that reaffirms one’s faith in humanity.

Director Hannah Brown ’15 has been involved with the group as an actress and has worked behind-the-scenes as technician since she was a freshman.

“This play was selected through a process in D-Term last year,” Brown says. “I chose it because I saw it when I was in high school. I’m not quite sure if I could pinpoint exactly what it is about the play. It resonated with me.”

Who: Masque & the WPI Department of Humanities and Arts
What: The Beams Are Creaking by Douglas Anderson
Where: Little Theatre
When: Thursday–Saturday, Sept. 25-27, 7 p.m.
Open to the public. Tickets $5.
Reservations: https://users.wpi.edu/~theatre/.

According to the show’s playwright, The Beams Are Creaking takes its name from a password used among the conspirators. In an interview with The Seattle Times, Anderson said, “Their thought was: You kill Hitler too early in his regime, then another Hitler may take his place. You also shouldn’t wait too late, until the war ends and the country might be overrun by the Russians. When the beams creak is when the roof is making noises like it’s about to cave in.”

Today, Dietrich Bonhoeffer is considered a martyr, revered internationally for his actions. Senior Ian Maitland plays the role of Bonhoeffer. He has been on the WPI stage many times over his years on campus.

“The challenge of portraying Dietrich Bonhoeffer is certainly one of the greatest tasks I have taken on in my acting career,” Maitland says. “I have previously portrayed characters that make up most of the show and I am no stranger to having to throw myself completely into a character. The extra challenge with portraying Dietrich is that he is a historical figure who has had a large impact on the western world and has a plethora of writings to add to this. Luckily, this means I can get a direct insight into his mind and it allows me to really get a feeling for how Dietrich was in real life.” 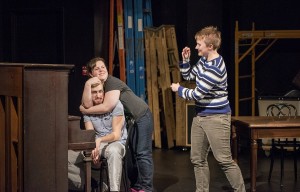 The script ranges from Bonhoeffer’s time of study in America to his transformational return to Germany, when he became an eventual convicted conspirator. “One challenge in staging,” says Brown, “is that in the first act there is one primary set, a living room, but there are many other shorter scenes that take place elsewhere—at the 1936 Olympic Games, in other offices, at a book burning rally, etc.”

Bonhoeffer was hanged on April 9, 1945. His letters were posthumously published, as Letters and Papers from Prison. Playwright Anderson was a theatre and religion major at Kenyon College in Ohio when he began writing The Beams Are Creaking. When asked why he thought this once pacifist preacher became a conspirator in an assassination plot, Anderson said, “You can’t profess what you believe only on Sunday—you have to act on your beliefs. That transcends any particular religion. It’s why his story is meaningful worldwide.”