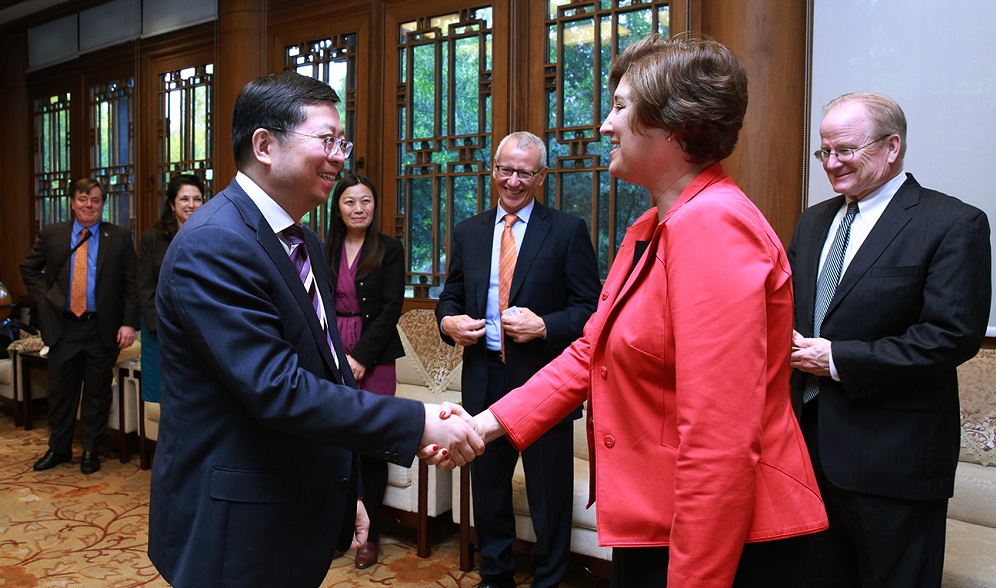 The Past Paves a Future for Global Public Safety

At her inauguration back in 2014, President Laurie Leshin set a bold agenda for the university: to become the premier global polytechnic and to go forth to have an even greater and even more positive impact on communities around the world.

Now that vision is closer to becoming a reality. True to its mission, WPI has created a partnership with Tsinghua University in Beijing—one that aims to make the world safer. And, as it turns out, it has roots that are more than 100 years old.

​Tsinghua is one of China's best known and most distinguished educational institutions; it is also the nation's top engineering school. Both universities have been working to increase disaster prevention and relief practices around the world. That research is now the framework for a future center for global public safety.

A cooperation agreement was signed October 20, 2016, by the presidents of both universities during a visit by a WPI delegation to Tsinghua’s Beijing campus. Under the agreement, the universities will develop a joint academic and research center focused on global public safety concerns related to man-made and natural disasters, such as earthquakes, floods, and fires.

Once established, the center will allow researchers to better understand the public safety concerns facing various countries and cultures across the world. It will also provide joint research, and dual-degree and educational programs to provide students with the cross-cultural skills needed to become next-generation leaders in global public safety.

“In the face of global challenges related to public safety, we need to cooperate across national boundaries to find solutions,” says Leshin. “Our partnership with Tsinghua will enhance opportunities for our students and faculty to make a global impact by combining our expertise with one of the world’s leading technical schools.”

The center will leverage the strengths of both institutions: WPI has vast resources in fire protection engineering, including its state-of-the-art UL Fire Performance Lab and its Center for First Responder Technology; Tsinghua will lend its considerable knowledge of resilient systems for infrastructure through its internationally influential Institute of Public Safety.

“This important agreement is an opportunity to further deepen the ongoing cooperation between the two schools and strengthen the exchange of students and professors,” says Tsinghua president Qiu Yong.

While this partnership is new, the connection between WPI and Tsinghua has been more than a century in the making.

Yi Chi Mei came to WPI in 1910 and established himself as a top student in electrical engineering. After earning his bachelor's degree in 1914, he returned to China to teach at National Tsinghua University. He was named president of Tsinghua in 1931 and based on his experience at WPI, established the university's engineering school. He was a pioneer in education who understood the power of knowledge to change China and the world for the better.

The disruptions of war in the 1930s and '40s forced the university to relocate several times, but under his leadership it continued to educate and train students in the critical skills needed to rebuild China. Tsinghua’s elite status is largely due to the work and philosophy of Yi Chi Mei during one of its most challenging periods. His heritage formed a bond between WPI and Tsinghua and over the years both have enjoyed a long-standing relationship.